Crete, the largest island in the country of Greece, is renowned for its sandy beaches and mountainous terrain, as well as its historical sites and vibrant nightlife. As the fifth largest island in the Mediterranean Sea, it should come as no surprise that the list of the best beaches in Crete is lengthy and filled with sites that appeal to beach goers of any variety. Whether you seek isolation and untouched, pristine beaches or beaches appealing to the more luxurious traveler seeking all the modern amenities, there is sure to be a beach in Crete that fits the bill.

Often visitors flock to the best beaches in Mykonos and in Santorini, but Crete should not be missed. 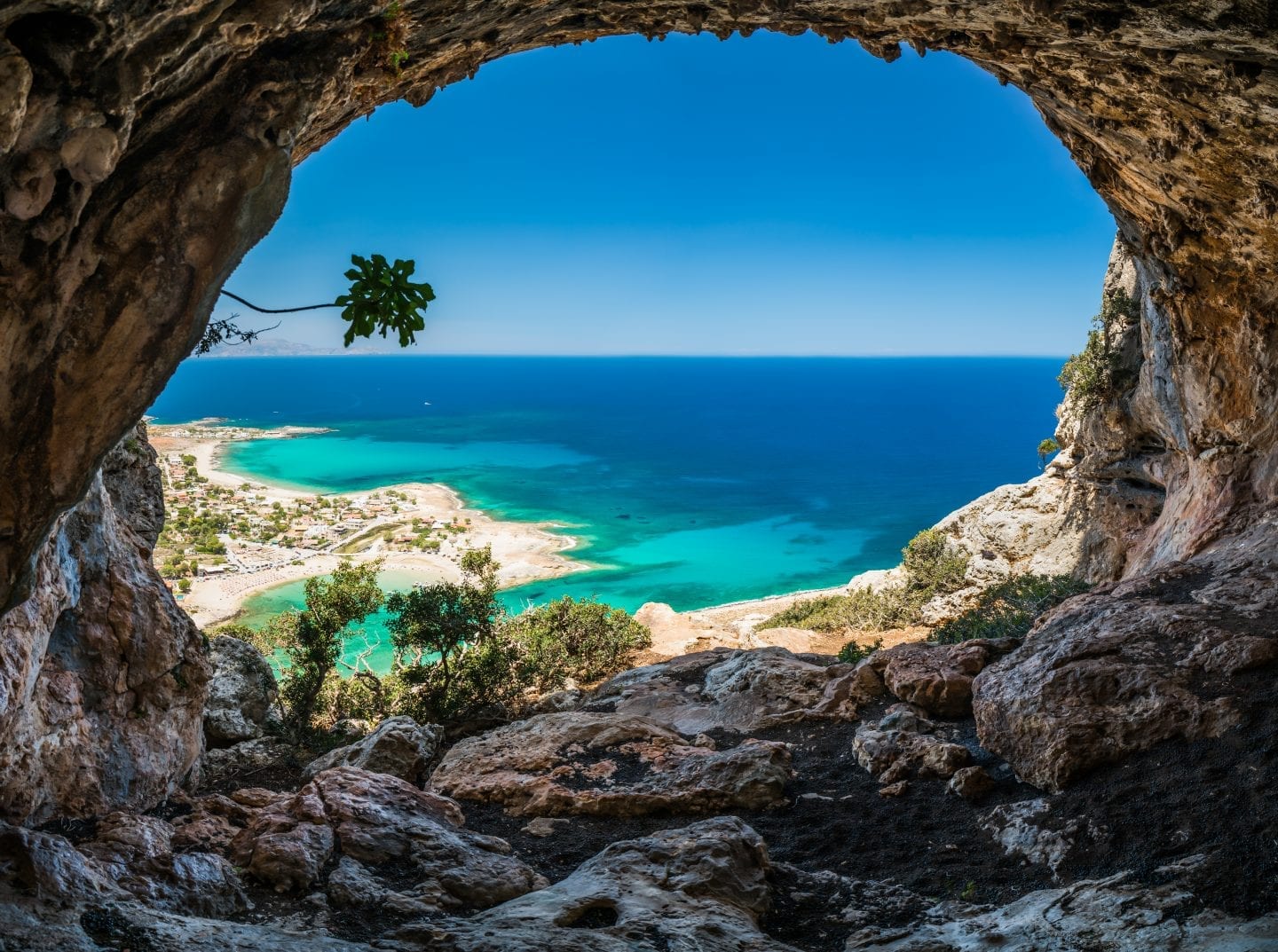 Located on the island of Elafonisi off the southwestern portion of Crete, Elafonísi Beach is by far one of the most well known and best beaches in Crete. With sands that have a soft pink hue when the waves break against them and warm, shallow waters perfect for snorkeling, this beach can be very busy during peak tourist season, but should you arrive early or during the off-season, you have the chance to enjoy the lagoon-like waters without interruption. Elafonísi Beach is located about 75 km from the town of Chania, the road to which can be quite daunting as it winds and twists around rocky cliffs and caves. One fun fact is that this small island can be accessed from the mainland of Crete by foot when the tides are low enough! Since the island is a protected nature preserve, the beach and its surroundings remain unspoiled, making it one of the best beaches in Crete for nature-lovers as well as families. 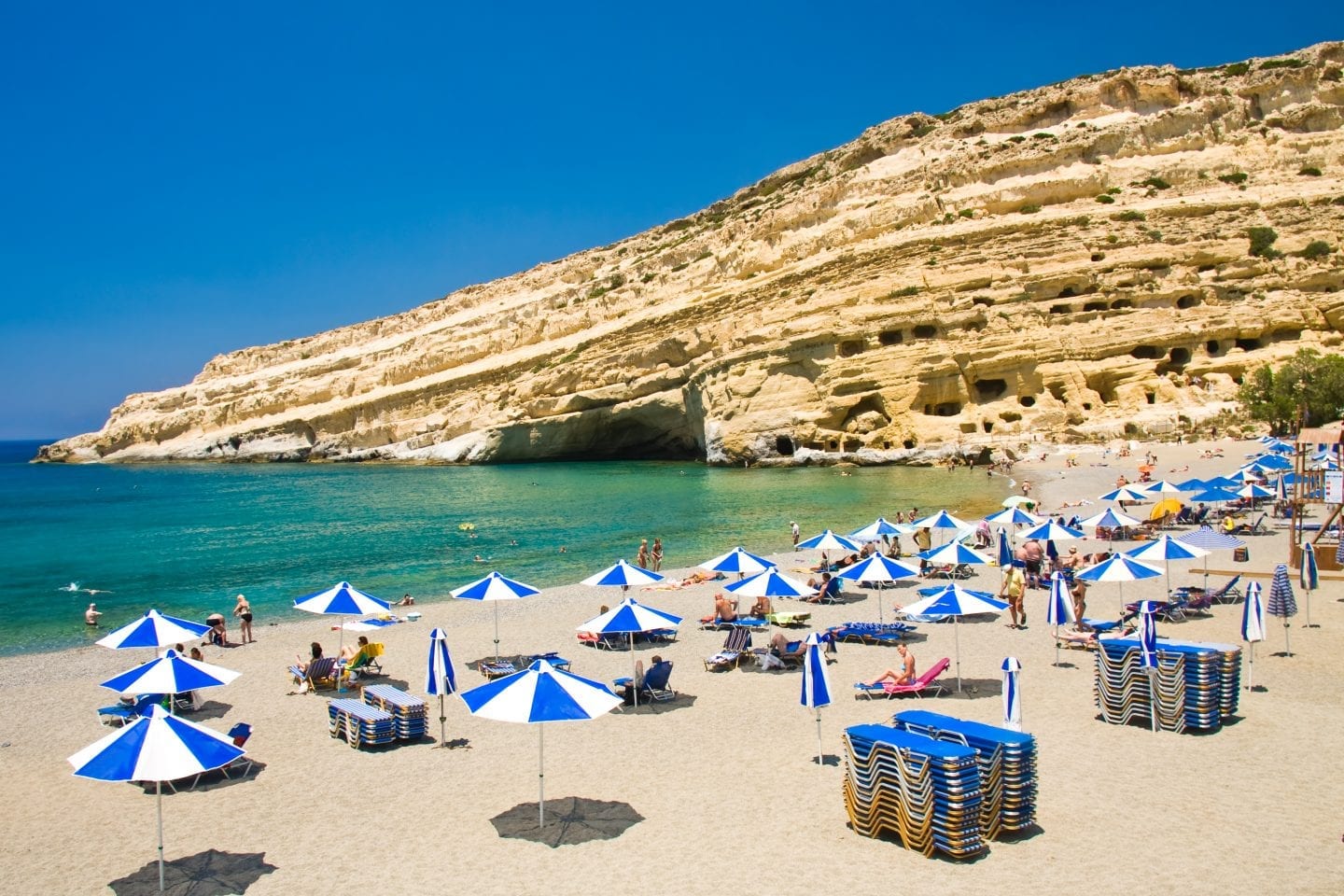 Matala is located on the southern shore of central Crete and is home to Mátala Beach, another one of the best beaches in Crete. Well-known for its history as a “hippie beach” in the 60’s and 70’s, Mátala Beach drew crowds of peace-loving freedom seekers as well as celebrities such as Janis Joplin, Bob Dylan, and Joni Mitchell. The most notable feature of this particular beach is the large cave that sits to the north of the bay where you can often find intrepid adventurers diving into the deep waters below. Additionally, a large number of underwater caves show evidence of being ancient dwellings and residences, making it one of the best beaches in Crete for scuba diving and snorkeling.

Also known as Sweetwater Beach, Glyka Nera Beach is located in southwest Crete at a place where the mountains meet the water. A largest amount of underground fresh water gives this beach its name and accounts for the trees that grow around the perimeter. Accessible by water taxi or hiking trail, this beach is often free from overcrowding, making it a favorite for sunbathers and “naturists” so be aware that nudity could be quite common. One remarkable feature is the small tavern that sits atop a large rock in the water, serving homemade Greek cuisine to those who visit. Surprisingly secluded, Glyka Nera Beach is one of the best beaches in Crete for those seeking to get in touch with the natural beauty that Crete has to offer.

Vai, meaning palm in Greek, is one of the most popular of sites in Crete. This beach, located in the eastern portion of the island, is home to the largest natural palm forest in all of Europe, making it a very tropical attraction for tourists looking to enjoy the best beaches in Crete. The palm forest is now a protected area and closed to the public at night, but the area remains a popular destination for tourists looking to relax under the blue umbrellas and admire the turquoise waters of the ocean that hugs the white sand beaches. One fun fact; this beach was discovered by mainstream media during a commercial featuring coconuts, but the palm trees here actually produce dates! At one point in its history, they artificially attached coconuts to the trees to prevent the disappoint of travelers who were traveling to a beach they thought was covered in coconut trees!

In the southeastern part of Crete lies the small village of Myrtos, where you can find the course grey sands of Myrtos Beach and the opportunity to explore life in a traditional Aegean seaside. Explore the local harbor and narrow streets before venturing to the calm and quiet waters of this popular beach location, famed for its slower pace and sand that surprisingly does not cling to the skin unlike the white sand beaches found elsewhere. While recently experiencing moderate development and including many of the comforts expected of beaches in Greece, including showers, umbrellas and small restaurants, the lifestyle here remains very traditional and harkens back to a simpler time, making Myrtos Beach on of the best beaches in Crete to truly relax and sample some of the slower, Mediterranean pleasures of a more traditional time.

Located in southwest Crete not too far from the Elafonisi lagoon is the remote and secluded Kedrodasos Beach, considered by many to be the last unspoiled paradise in Europe. The area is heavily protected as a nature preserve and for this reason lacks many of the amenities of tourist beaches found elsewhere in Crete. Due to this fact, this beach is usually secluded and free of tourists and travelers. The area is surrounded by 110 acres of pristine juniper forests, the delicate trees once mistaken for cedar trees, which gives this area its name. Kedrodasos translates from Greek to mean “cedar trees”. The area is hike in and hike out, another reason for its relatively unspoiled condition and its lack of overcrowding, making it one of the best beaches in Crete for those seeking privacy and seclusion.

Frangokástello Beach is located in the southwestern portion of Crete and is one of the most unique of the best beaches in Crete for its namesake, the Castle of the Franks, a Venetian-era castle that overlooks the white sands and turquoise waters of this area. Though often very crowded and lacking some of the organization and amenities of other beaches in Crete, this magnificent sweep of coastline is a great destination for travelers seeking the stunning sites that Crete has to offer. An adjoining beach abuts a wetland and is more gravel than sand, but the shallow waters of both areas are a perfect spot for snorkeling and swimming.

The remote village of Xerokampos is located in the southeastern part of the island of Crete and has been rated as one of the best beaches in Crete for those seeking a pristine and uninhabited location. The drive to this location is described as nothing short of harrowing, with hairpin turns, steep drop-offs, cliff sides overlooking pristine beaches and small remote countryside villages. Some portions of this virtually untouched area have natural clay mud pits that are used to soften the skin much like what you would find in a spa resort. The water is shallow and warmer than other parts in Crete due in part to the geographic location of this small village. Truly intrepid explorers can venture further around the area of Xerokampos to find even more remote and isolated coves to explore as their own private beach for the day. 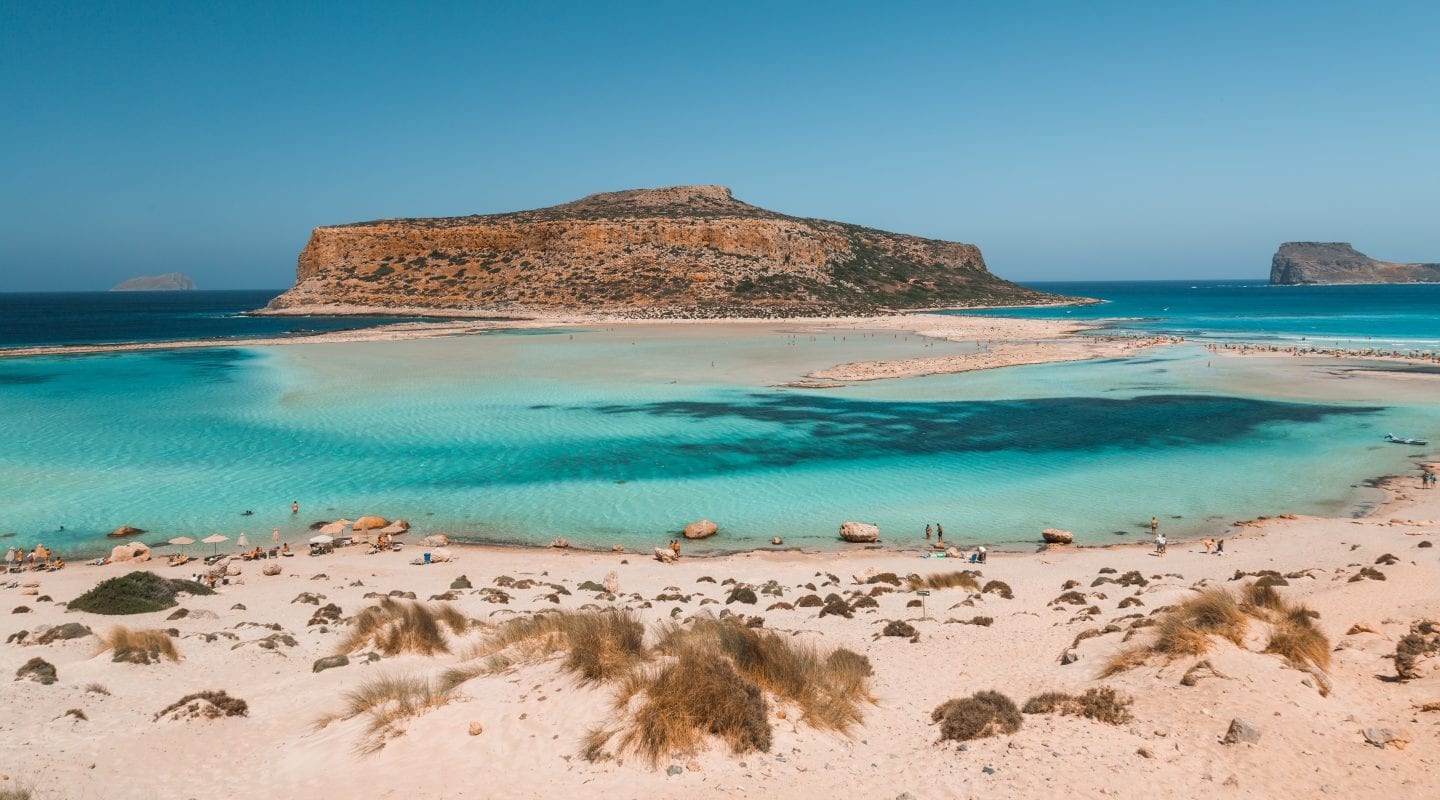 Located in western Crete, Balos Beach is considered one of the most photographed beaches in Crete for its unique topography and features. This extremely shallow, protected lagoon is known for its warm, calm waters, making it a perfect destination for families with small children. The protection from this lagoon also makes this place a preservation area for loggerhead sea turtles as well as monk seals. You can also see falcons and cormorants diving and swooping overhead from the natural caves that pepper the rocky terrain that surrounds this area, making this one of the best beaches in Crete to spot some of the exotic wildlife that calls this area home.

In the western portion of Crete, nestled along the mouth of the large and imposing Aradena Gorge is Marmara Beach. With a pebbled shoreline and striking cliffs to either side, this beach is very remote and often free of crowds. The crystal clear waters of Marmara Beach are perfect for snorkeling and swimming, a perfect rest after the long hike needed to get here. During summer months, a ferry runs sporadically from a neighboring village, making this a rather difficult beach to venture to, but worth the effort for the intricate and stunning underwater caves, tidal grottos and striking views of nearby cliffs. Atop one such cliff, a small tavern exists to provide Greek food and cool drinks overlooking the ocean and beach below, making this one of the best beaches in Crete for a private or romantic getaway.

Whether traveling as a family with small kids, backpacking solo, seeking a romantic retreat with a loved one or yearning to explore the wild wonders of Crete, there is sure to be a beach that suits your exact needs. Whether you seek luxury and amenities or remote isolation, the island of Crete has hundreds of options to choose from. This list of ten of the best beaches in Crete should help narrow your search when planning your next adventure to this Greek Mediterranean island oasis! 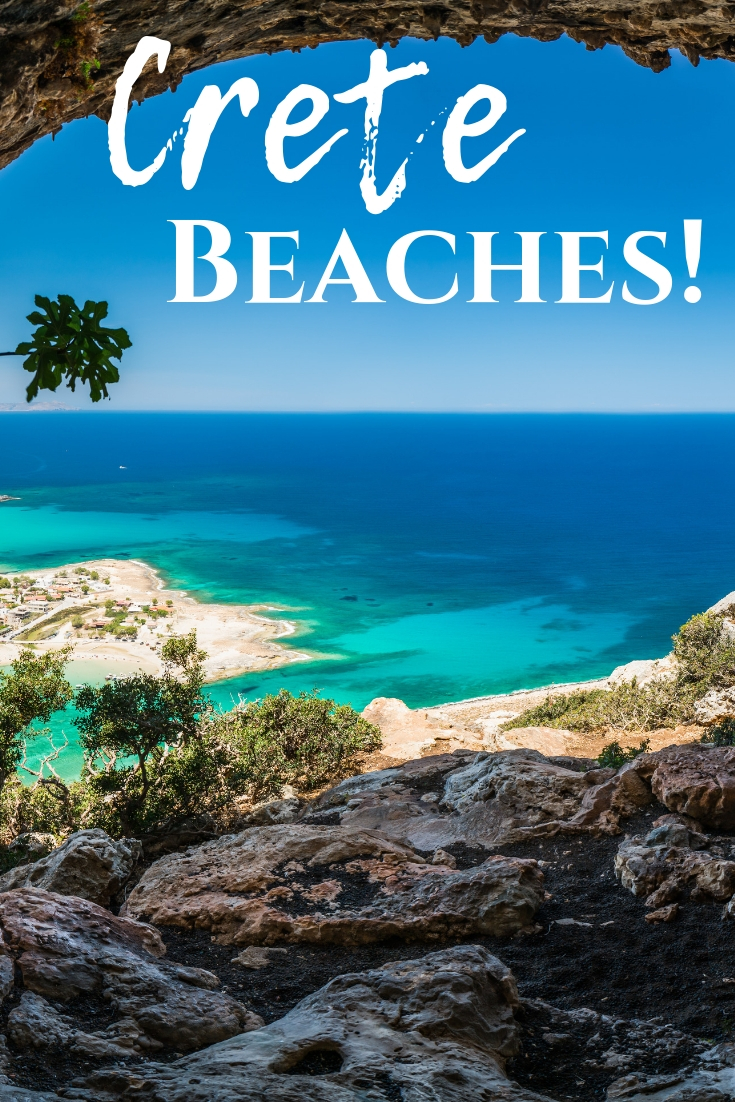 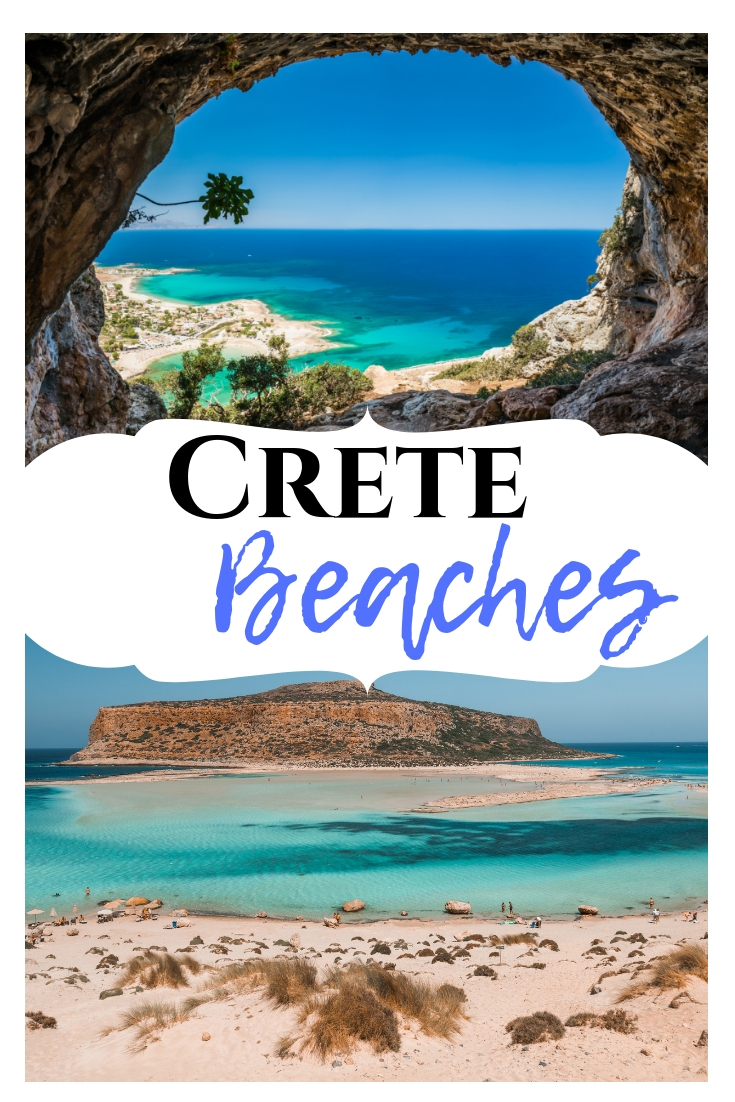