Located in the Mediterranean, the country of Greece has a long history of cultural and accomplishment unrivaled by any other country in Europe. With such a lengthy and storied history, this country is a vibrant tourist destination filled to the brim with interesting facts and amazing sights that are sure to inspire any traveler. When planning your next trip to this unique destination, read through these facts about Greece to make the most of your adventure! 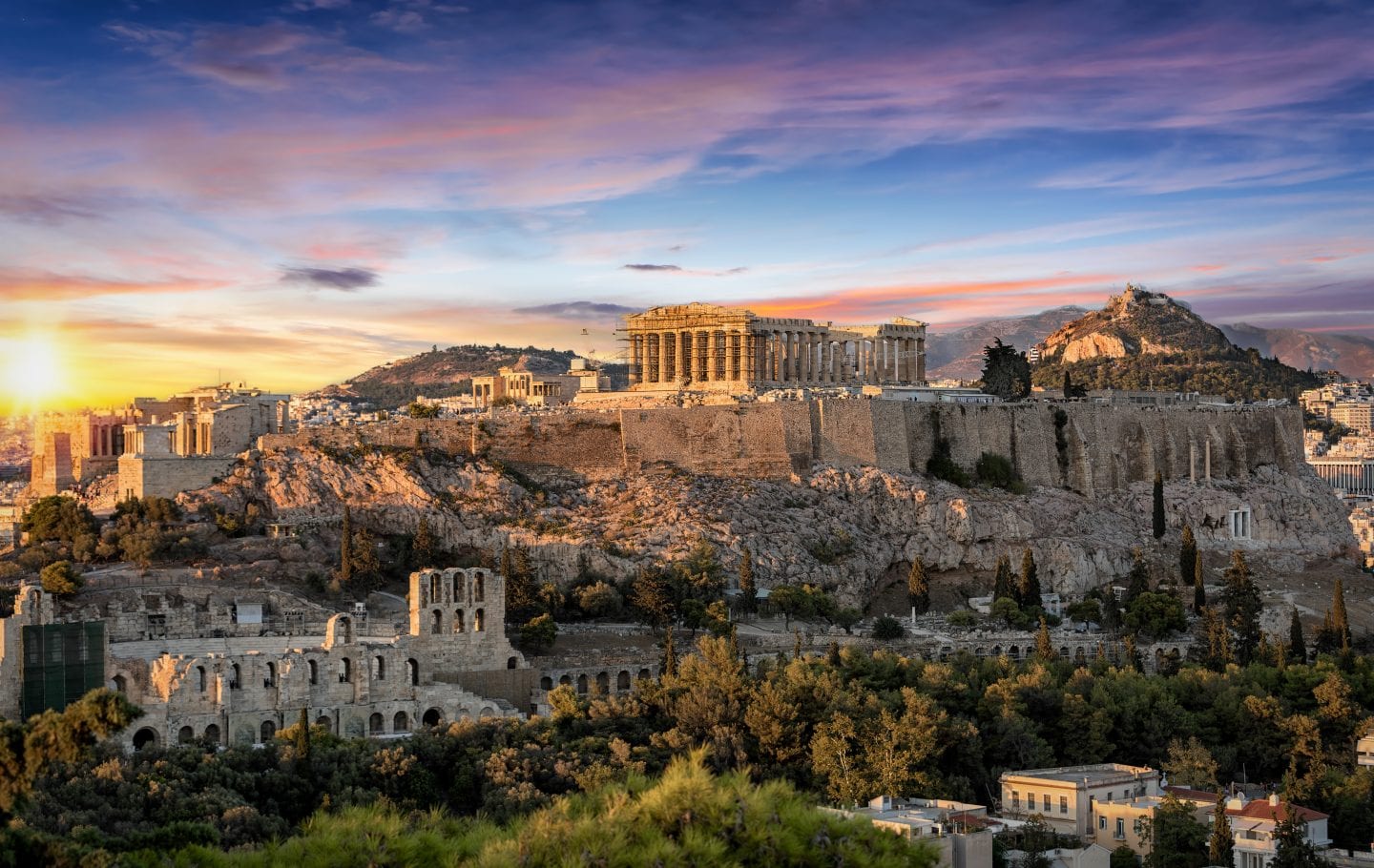 Greece is located in the southeast portion of Europe on the southernmost tip of the Balkan Peninsula, often known as the crossroads of Europe, Asia and Africa. One very little known but most interesting of the facts about Greece is that it is not actually called Greece! The country of Greece is officially called the Hellenic Republic, or Hellas. The Romans first introduced the name Graecia, roughly translated from Latin to mean “Land of the Greeks”, but the people of Greece have always referred to the area as Hellas since before the time of the Roman conquest.

Greece has a population of approximately 11 million people and covers an area of about 50,000 square miles, making it roughly the size of Alabama or Louisiana. Over 25% of the population resides in the capital city of Athens, the country’s largest city which is located along the central eastern coast of Greece.

Greece has a warm, Mediterranean climate with mild and wet winters followed by very hot and dry summers. One of the most encouraging facts about Greece for tourists is that this country’s climate accounts for on average 250 days of sunshine every year! With some of the best beaches in Mykonos, Santorini and Crete. 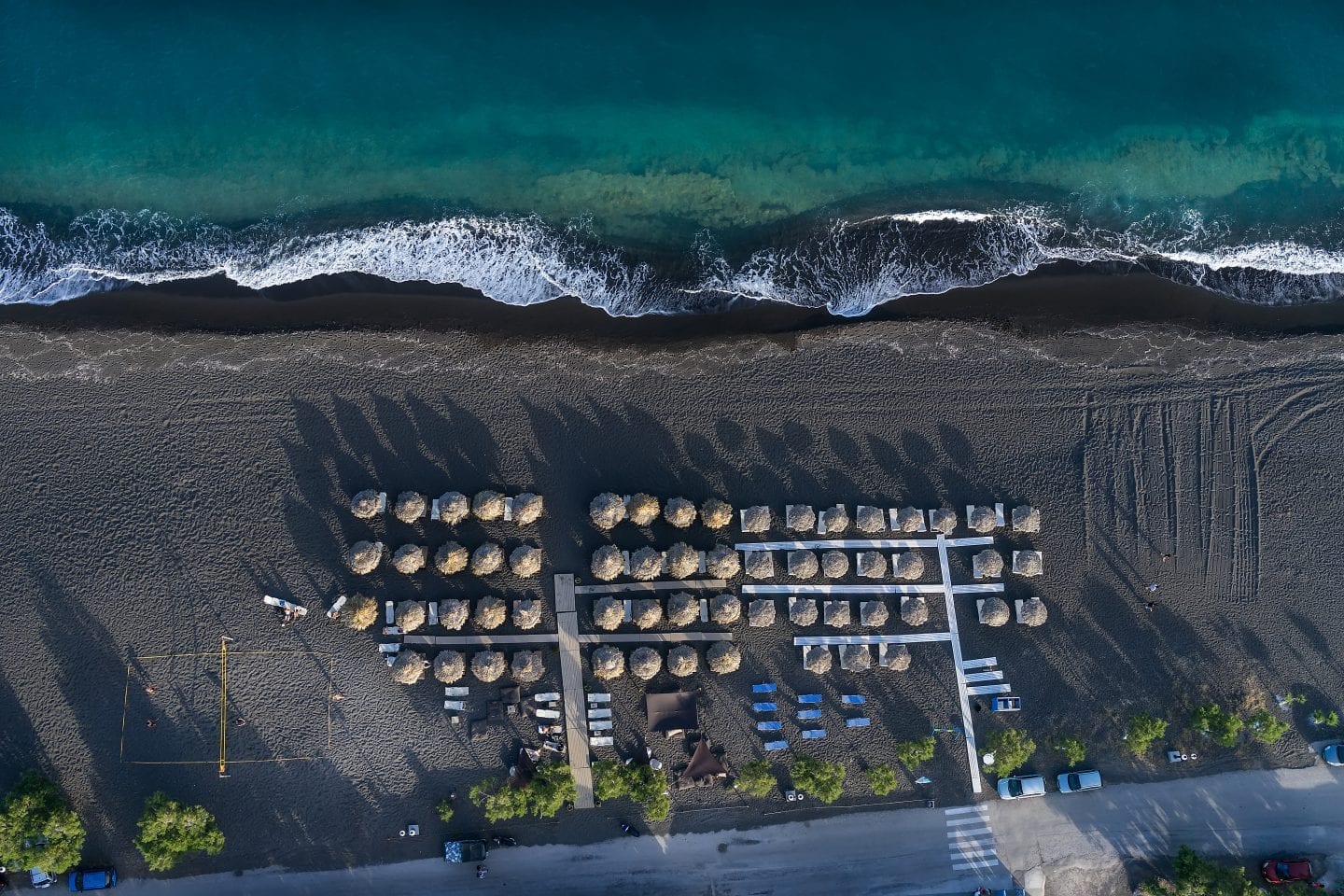 Greece has a very mountainous terrain, sharing it’s northern border with the countries of Albania, North Macedonia, Bulgaria and Turkey. It is surrounded on the three remaining sides by the Aegean Sea, Ionian Sea, Cretan Sea and the Mediterranean Sea. In fact, this geographic location accounts for Greece having the longest coastline of any country in the Mediterranean Sea and the 11th longest coastline in the world at well over 8,000 miles in length. Another of the interesting facts about Greece is that over 20% of its land mass is comprised of islands, with Greece having by some counts over 2,000 total islands! Of those islands, Crete is the largest and over 225 of the islands are known to be inhabited. The remaining 80% of the country is highly mountainous, with the highest of these mountains being the fabled home of the Greek pantheon of gods, Mount Olympus. It’s highest peak, Mytikas, is measured at over 9,500 ft above sea level!

The unique geography and location of Greece makes it home to many rare species. Loggerhead sea turtles and seals make the vast coastline their home while the heavily forested areas of mountainous mainland Greece are home to wild goats, roe deer, the Eurasian lynx and the endangered Eurasian Brown Bear. Another one of the interesting facts about Greece is that over 100,000 birds from across Asian and northern Europe migrate to the wetlands in Greece for the winter months, making this an ideal location for bird spotting!

After a huge debt crisis in 2010, Greece was the recipient of a number of economic bailouts and aid programs. At one point in 2010, Greece had the 2nd highest deficit in the entire world, which resulted in a number of huge initiatives to improve the country’s GDP. Since then, tourism has become one of the mainstays of economic activity for the country. Well over 20% of their gross domestic product came from tourism in 2018, which is the year that the bailout programs came to a close. Saved from the brink of collapse, Greece now welcomes well over 28 million visitors per year as a part of their various tourist initiatives.

It’s no surprise that Greece is a tourist destination unlike any other! People have always been drawn to this centralized crossroads. One of the facts about Greece that proves this point is that it’s capital city of Athens has been populated for well over 7,000 years, making it the oldest continuously inhabited city in the entire European continent!

As the crossroads of the Eurasian and African continents with such a lengthy and complex history, Greece is considered by many historians to be the cradle of Western civilization. Home to the birthplace of many modern day norms, Greece is the origin of not only democracy and philosophy, but also literature, politics, science, math, theater, and sports! Even modern waste management harkens back to ancient Greece, with the first community dump created in 500 B.C.!

With the conquering of much of the ancient world by Alexander the Great, the annexation of Greece by Rome in the second century B.C., and the subsequent spread of the Greek Orthodox Church in the first century A.D., Greek ideals, architecture and knowledge spread throughout the world and became part of the universal lexicon that shaped the centuries that followed. For this reason, Greece takes its history very seriously. There are 18 UNESCO World Heritage Sites in the country, with an additional 14 sites awaiting nomination. This dedication to preservation results in one of the most surprising facts about Greece; it is illegal to wear high heels in many of the historic sites in Greece. Scientific studies were conducted that revealed a high heeled shoe exerts more pressure per square inch than the heel of an elephant, which results in cracking and damage to the ancient wonders that pepper the country of Greece. In fact, there is so much history in this country, it is now home to the highest number of archaeological museums in the entire world.

As the birthplace of modern democracy, Greece also takes pride in their own democratic freedoms. In fact, it is illegal in the country to not vote! Greece is the origin for all the political ideals we hold in high esteem today; government for the people by the people, trials by jury and the idea of equality under the law all originated in this Mediterranean country. Another historic ideal of Greece is the value of education. The first textual accounts of their language date back to the fifteenth century B.C. and the country also boasts the creation first institute that could be called a university in the known world. The University of Constantinople was founded in the fifth century A.D. and operated as the world’s first institution of higher learning until the Ottoman invasion in 1453.

Greek architecture flourished from around 900 B.C. till after the first century A.D. and spread throughout the world, remaining iconic and easily recognizable to this day. The oldest remaining examples of this architecture date to around 600 B.C. and the most remarkably well-preserved of these examples is the Temple of Hephaestus,  built around the fifth century B.C. Columns, seen worldwide to this day, were a mainstay of Greek architecture and can be seen throughout the country as well as the continents, spread by the influence of Greece during their lengthy history and travels. Even the iconic blue roofs along the white-washed coastlines date back to the ancient times! One of the surprising facts about Greece is that the ancient Greeks believed the color blue to ward off evil spirits and bad omens, and this tradition and superstition survives to this day in the architecture of modern day Greece.

In addition to creating the foundational ideas of modern biology, geometry, philosophy, physics, algebra, history and medicine, Greece was also origin of literature, art, theater and sports. One of the facts about Greece that touches lives to this day is the philosophy of the Hippocratic Oath. Found in ancient Greek medical texts, this oath is upheld by doctors to this day, stating above all else to do no harm.

Athens was home to the birth of theater as we know it today, including the mainstay genres of comedy, tragedy and satire. Theatrical arts were an institution of the Greek festival of Dionysia, celebrating the Greek god Dionysus, the god of fertility, wine and the arts. Modern entertainment as we know it would not exist were it not for the influence of ancient Greece. Another remarkable creation of the country of Greece is literature. Considered the birthplace of modern Western literature, Greece is the home to the epic works by Homer. Both the Iliad and the Odyssey were written in Greece by Homer, each work considered a staple of required reading for people around the world.

Among all these amazing accomplishments, perhaps the most well-known facts about Greece is that it is the origin of the modern day Olympic games. The first ever recorded Olympic games took place in Olympia in the year 776 B.C.. Because of this distinction as the creator of the Olympic games, Greece is always called first during the parade of nations. Greece has also hosted the summer Olympics twice, the inaugural modern Olympics in 1896 as well as the 2004 summer Olympics. 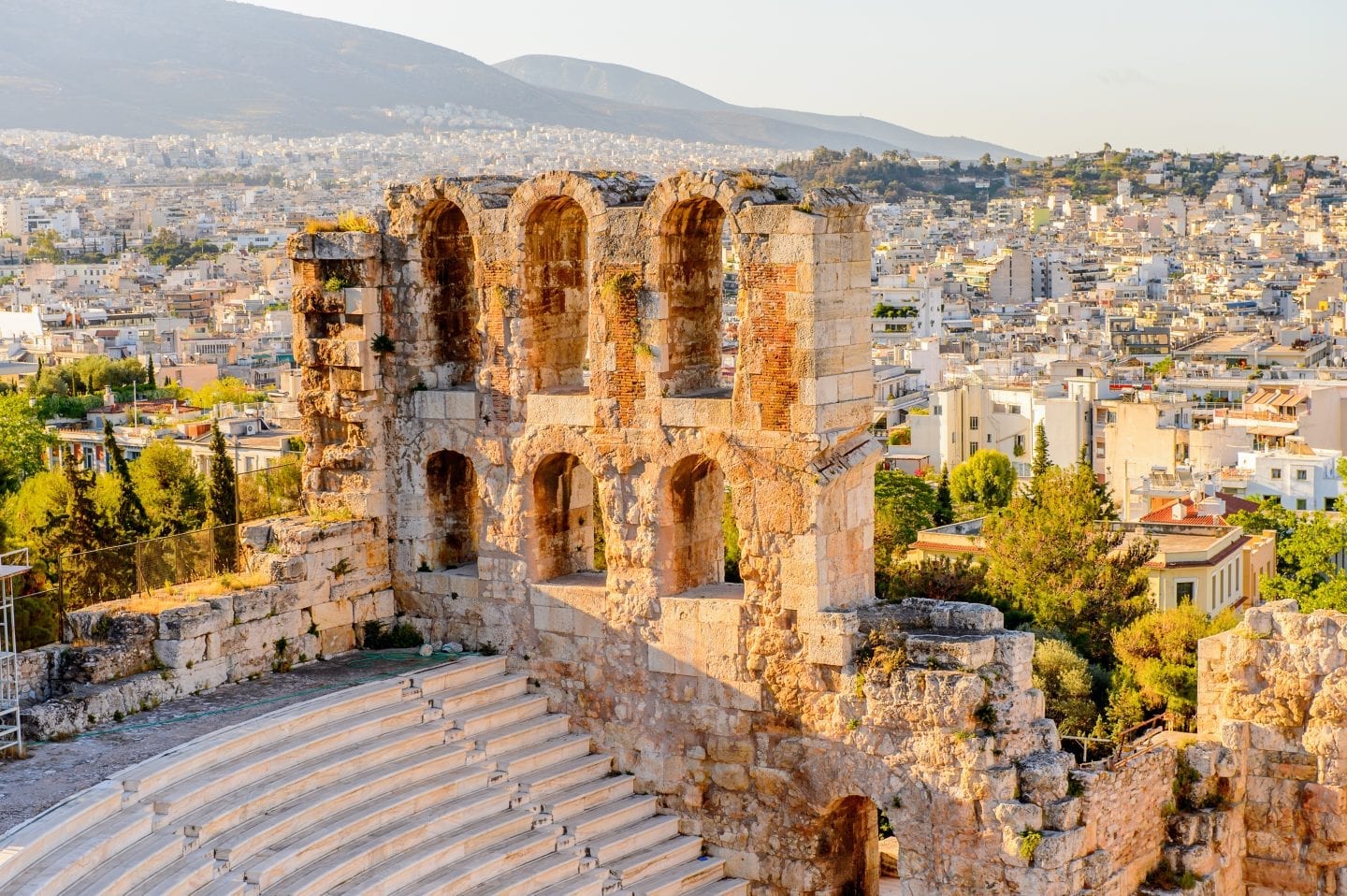 With some of the most groundbreaking discoveries and world-changing ideas under its belt, the country of Greece is filled with astounding historical sites, cultural wonders, and unique geographic locations that make this a tourist destination unlike any other. It’s no wonder that this small but mighty country is a bucket-list must for travelers near and far. Hopefully these interesting and surprising facts about Greece will inspire you to add it to your European bucket list. 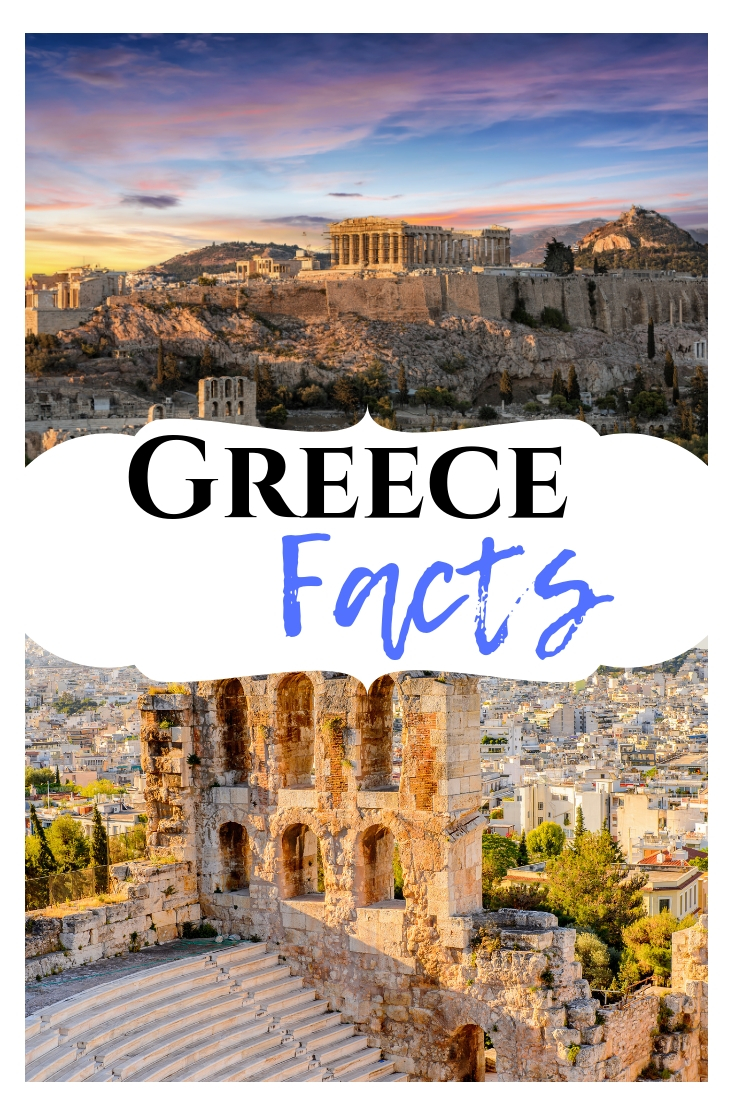