The United States is filled with amazing beaches, and this list has some of the best beaches in the USA. From the East Coast to the West Coast to Hawaii to Puerto Rico, these stunning beaches are sure to bring a little sunshine to your life.

While you are planning your summer escape, make sure to see if any of these beaches are on your USA bucket list!

You can easily make a day trip and put everything in a travel backpack for your visit. Don’t forget, water, sunscreen, snacks, a book, and a towel. 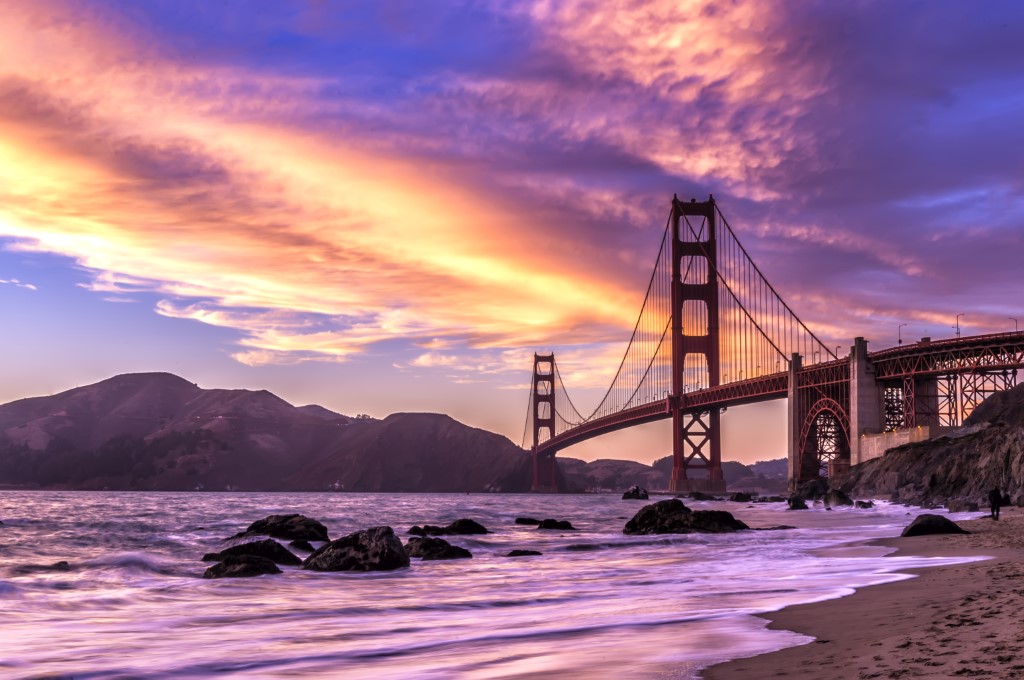 Best Beaches in the USA: The Ultimate Guide

By far, the most famous beach in the USA is Waikiki Beach. Situated along Oahu’s south shore, Waikiki Beach boasts year-long sunshine, swaying palm trees, and calm waters. If you are planning a visit, don’t miss this Oahu bucket list. 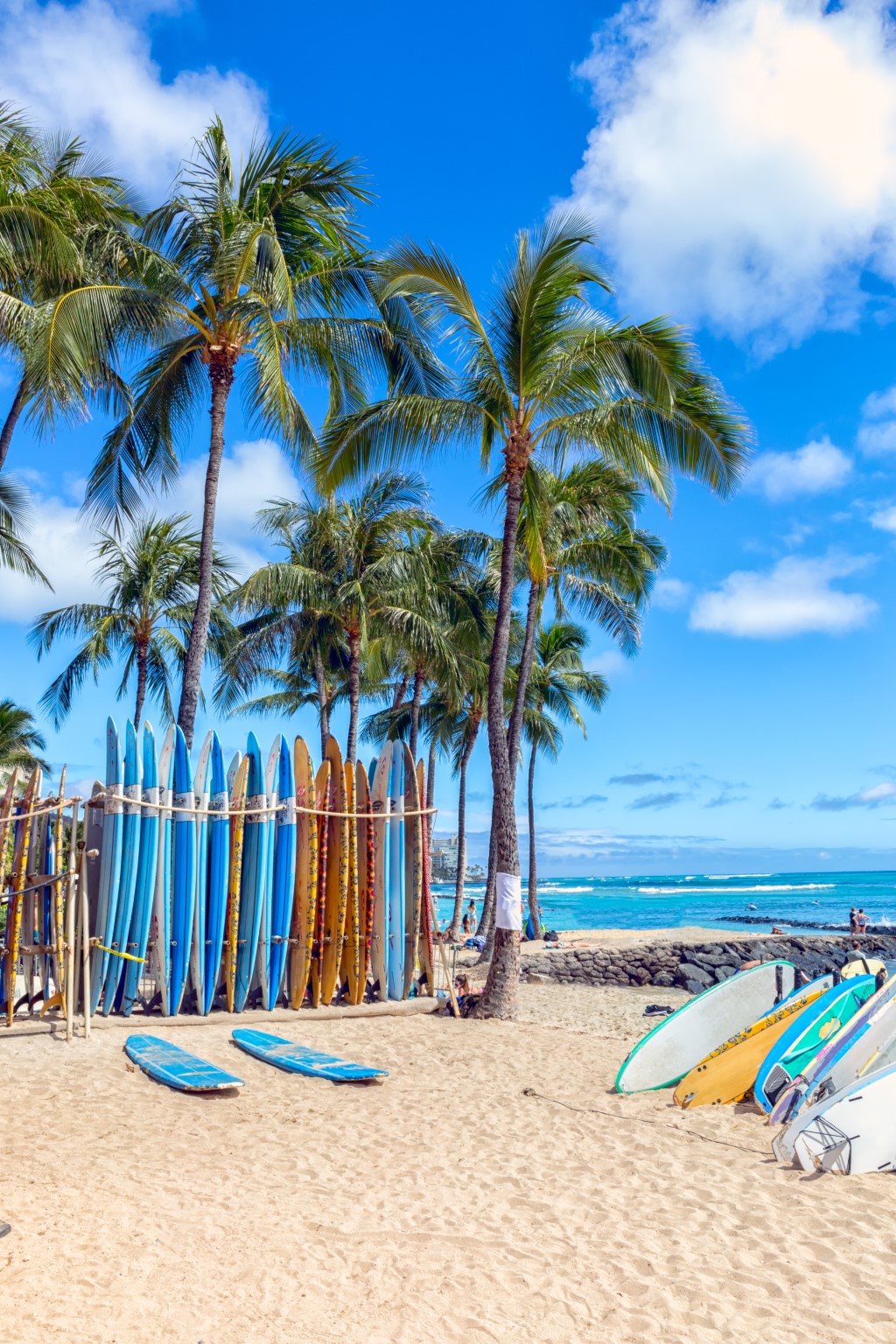 The beaches in Oahu are some of the best in all of the United States. 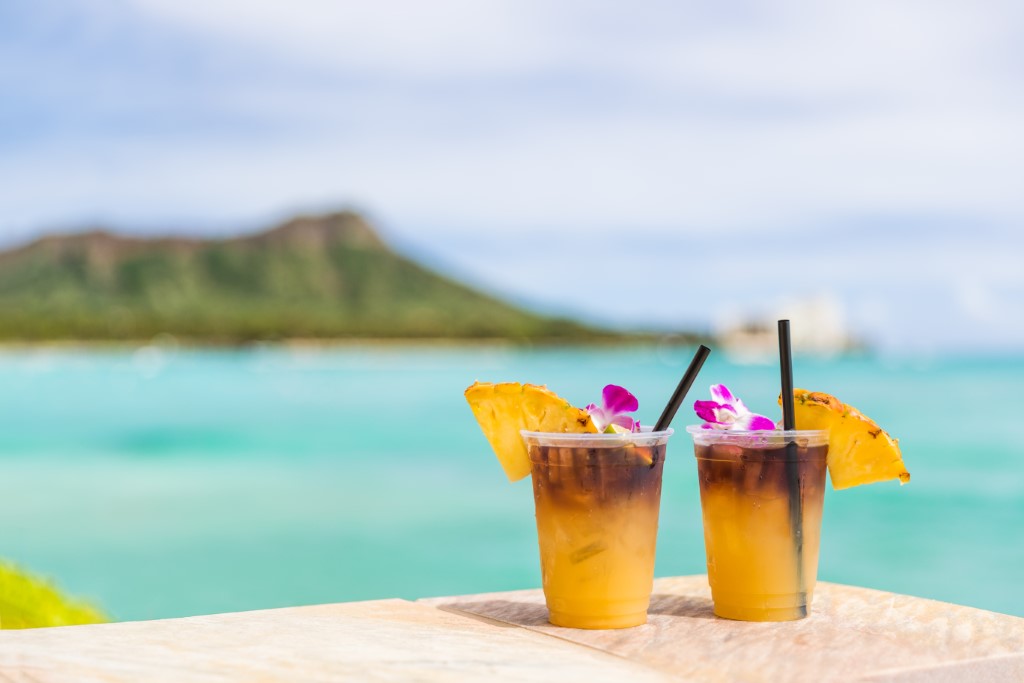 While Waikiki Beach is the most famous beach in the United States, Lanikai Beach on Oahu definitely rivals it. The same golden sand and warm sun are paired with stunning turquoise waters and two small green islands in the distance.

Oahu isn’t the only Hawaiian Island with beautiful beaches. Maui also has amazing beaches, including Kaanapali Beach, which is known for its calm waters, golden sand, and adrenaline-pumping cliff jumping. 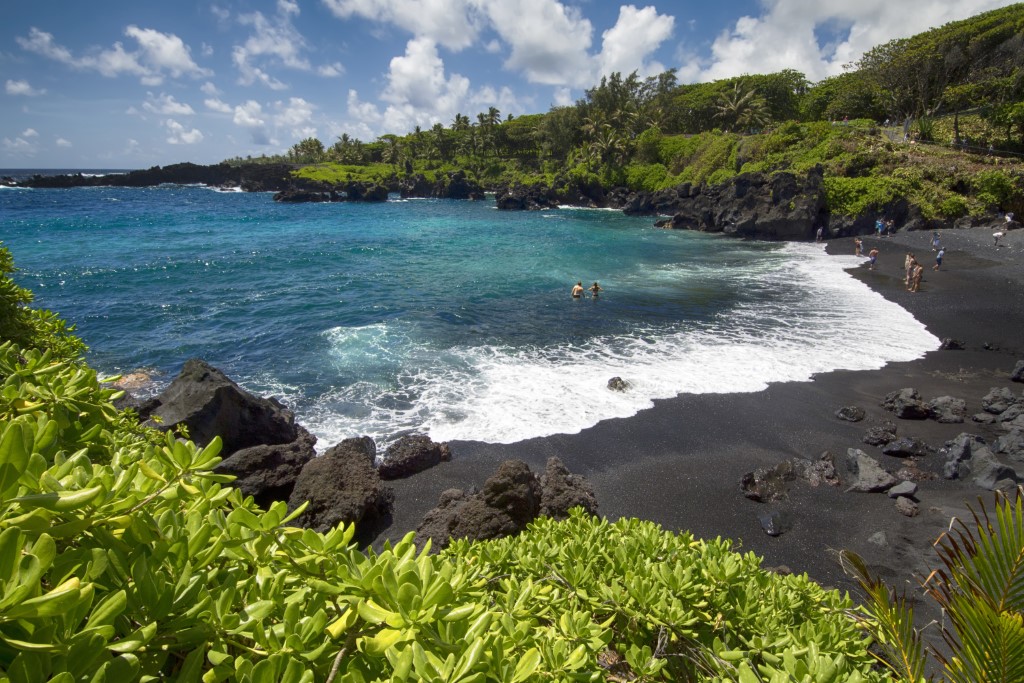 Speaking of colorful beaches, Papakolea Beach on the Big Island of Hawaii had to make it onto this list, as it is the only green sand beach in the country (and one of only four in the world)! The green color comes from olivine crystals that are mixed in with the lava rock, so it’s very rare to find so many of these green crystals all in the same place.

The Big Island of Hawaii is home to one of the most under-the-radar beaches in Hawaii. As a matter of fact, this hidden beach is one of the best beaches in the USA! Kua Bay is great for anything you’d like to do on the beach, including suntanning, snorkeling, bodyboarding, swimming, and shelling.

Pohoiki Beach is the newest beach in the United States. Created in October 2018 by the lava flow from the Kilauea volcano, Pohoiki Beach’s black sand glistens in a way unlike the sand at any other black sand beach.

Beaches on the Hawaiian Islands of Oahu, Maui, and the Big Island have all made it onto this list, and now it’s time for Kauai. To reach Kalalau Beach, visitors first have to hike the 11 miles of the dangerous Kalalau Trail along the Na Pali Coast. Then, there will be a peaceful beach with just a few people dotting this golden shoreline.

The two-mile long stretch of Zuma Beach in Malibu, California is perfect for any beach activity that you have in mind, including swimming, suntanning, and surfing. And it is also a fantastic place to watch the sunrise and sunset. 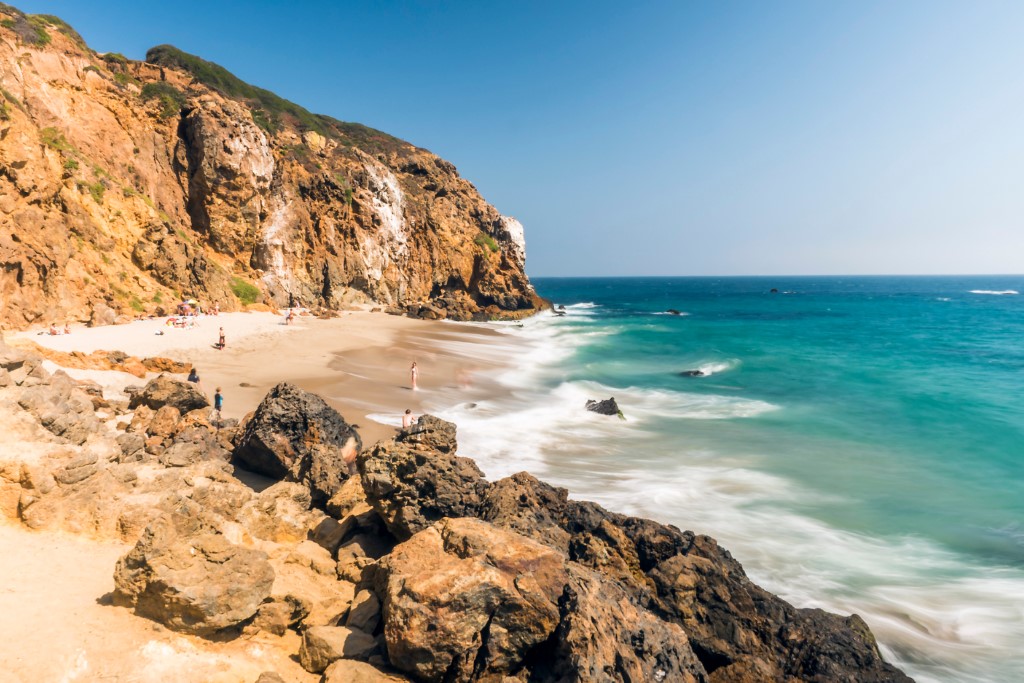 Coronado is also known for being one of the best dog beaches in San Diego. 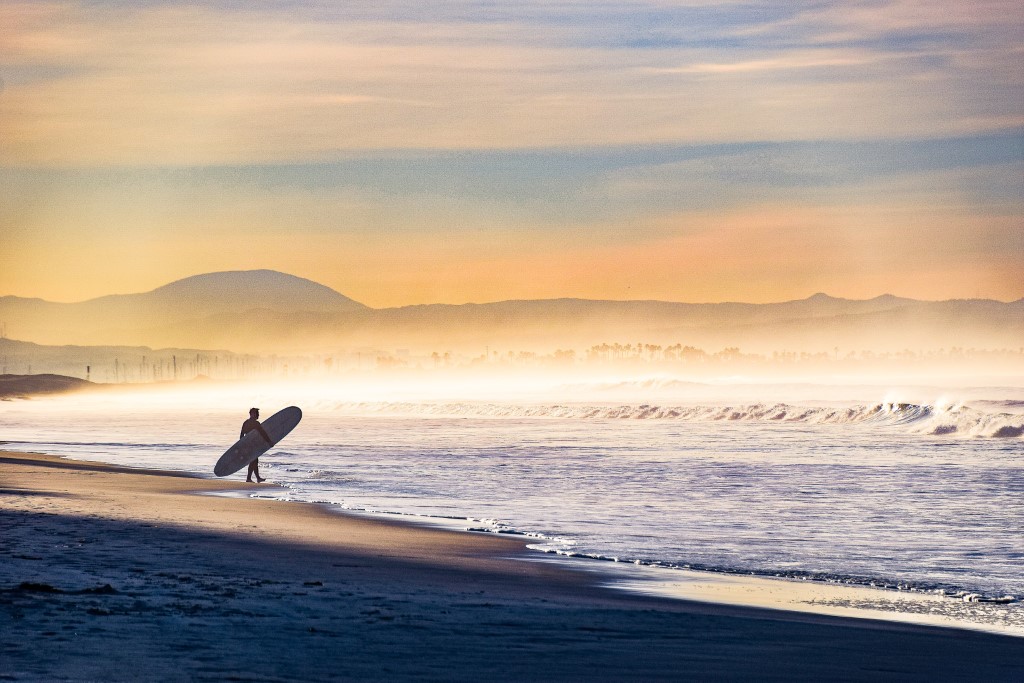 Cape Cod is a famous vacation destination in the northeast, and Coast Guard Beach is one of the best beaches in the area. Visitors rage about the pristine white sand and the wildlife, including seals and seabirds, that come to visit the area.

Hilton Head, South Carolina is a popular beach destination, and Coligny Beach is the best beach there. With pristine sand and an energy-filled boardwalk, there’s something for everyone.

Venice Beach is truly a beach unlike any other. Between the exercise equipment, beach volleyball courts, and street entertainers, Venice Beach is filled with energy and excitement. 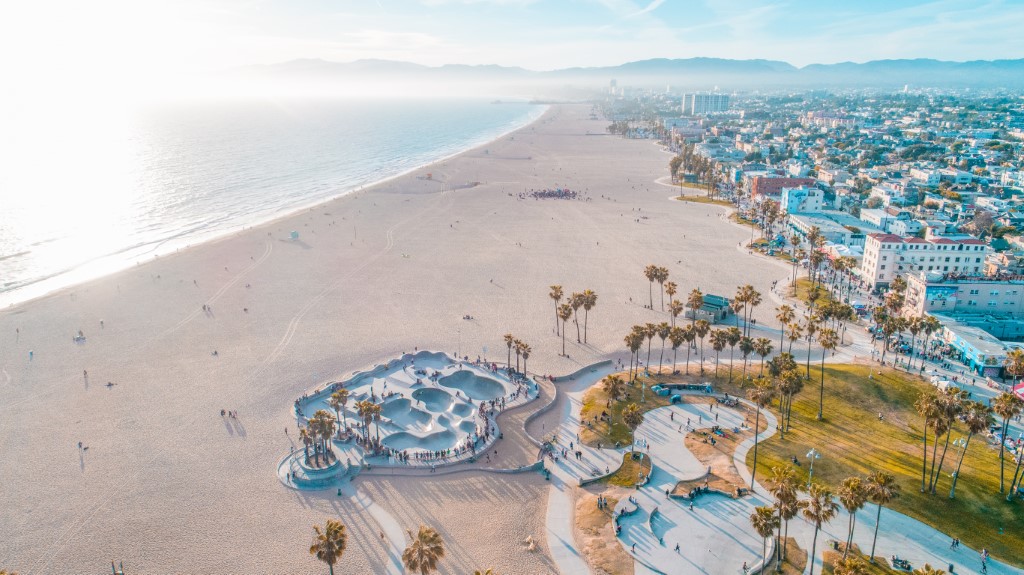 South Beach in Miami has long established itself as one of the best beaches in the USA. Similar to Venice Beach, South Beach has a fun, trendy vibe to it, emphasized by the Art Deco architecture and the eclectic group of people drawn to the area. 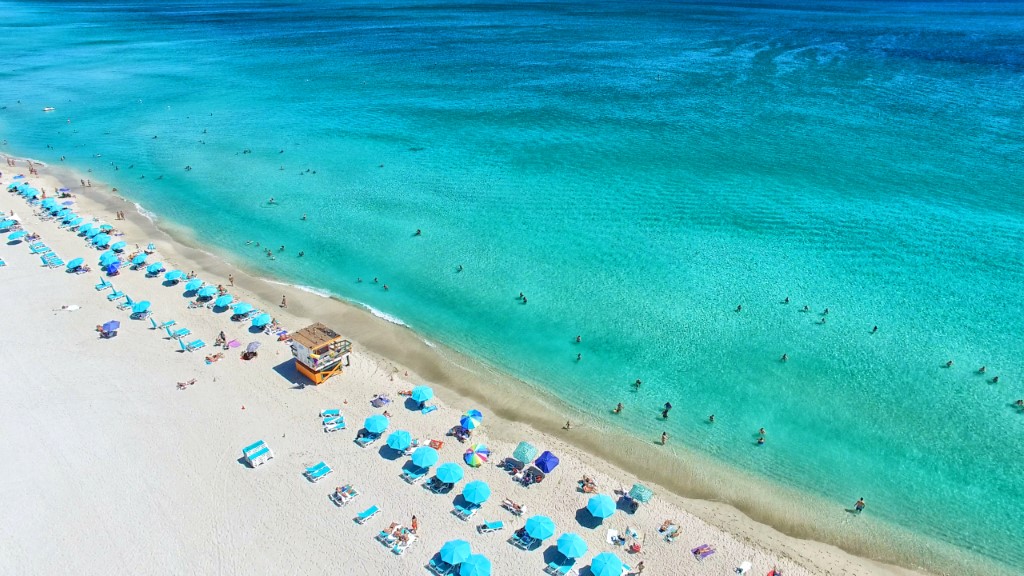 When people think of the best beaches in the USA, they usually think of warmer areas of the country, including Hawaii, California, and Florida. But Crystal Lake State Park in Vermont deserves to be on this list as well. In the fall when the leaves change colors, this glacier lake and sandy shoreline stand out from any other beach on this list.

Harris Beach State Park is a wonderfully unique place. With towering rock formations, shallow tide pools, and walkable trails, there is so much to do at this Pacific Northwest beach. 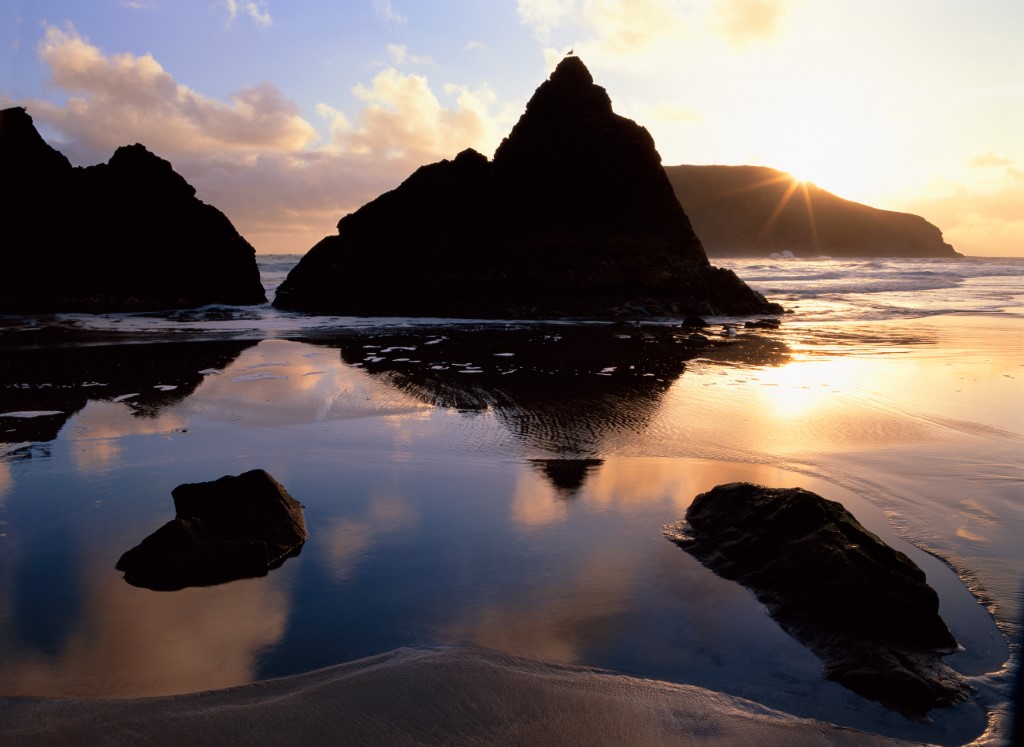 If many of the best beaches in the USA are found in warm places, why not head to the southernmost point in the continental USA: the Florida Keys. And no trip to the Florida Keys is complete without a dip in the light blue waters of the Dry Tortugas beaches. 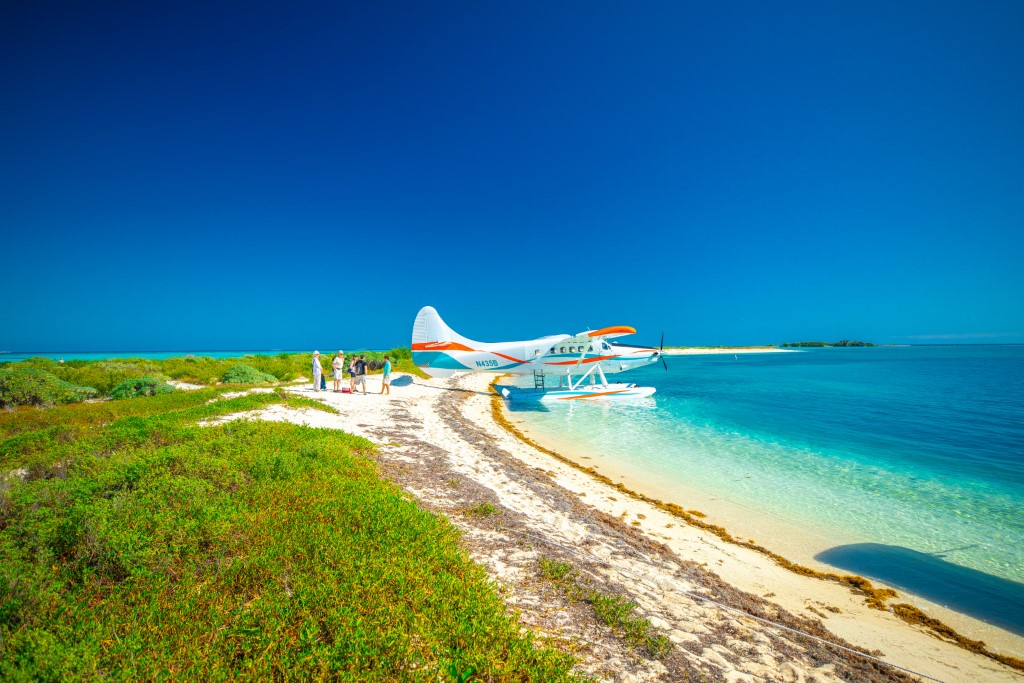 Kiawah Beachwalker Park is a special slice of land, because it’s where a river and the ocean meet. This type of landscape is perfect for dolphins, so, if you keep an eye out, you may see some of these friendly creatures.

The vast majority of the colored sand beaches in the USA are located in Hawaii – with the exception of Pfeiffer Beach. This California beach boasts pink-tinted sand, which can only be found in a handful of places around the world. 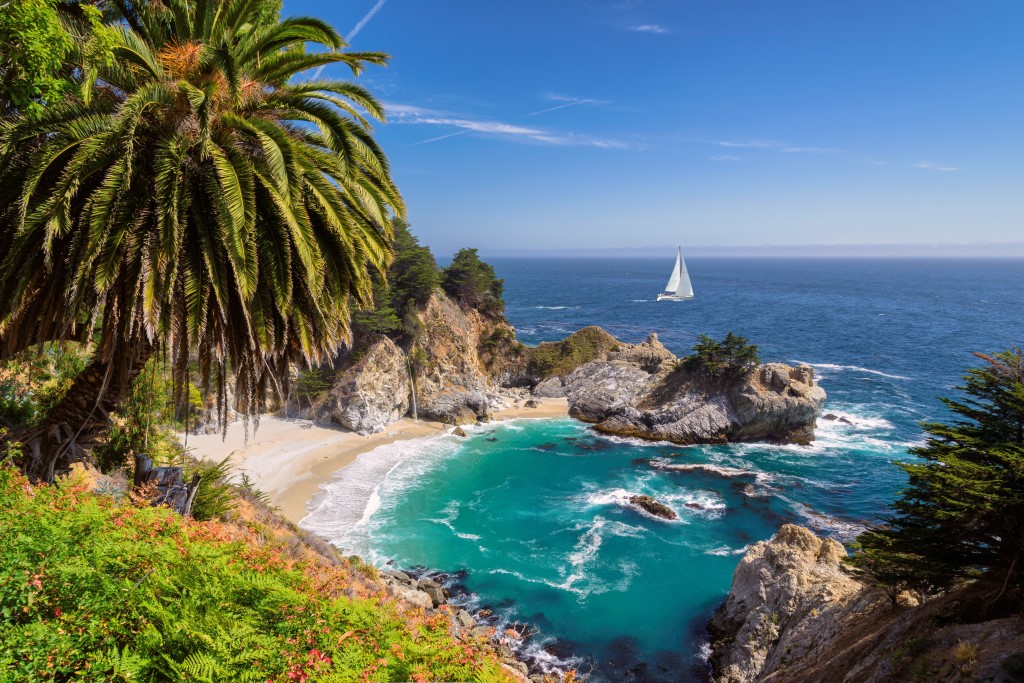 If you’re hoping to spend a full day on the beach, Gulf State Park is a great option. With two miles of sandy shores, nearly 30 miles of maintained trails, a boardwalk, campsites, and picnic areas, you’ll be able to stay entertained the entire day. 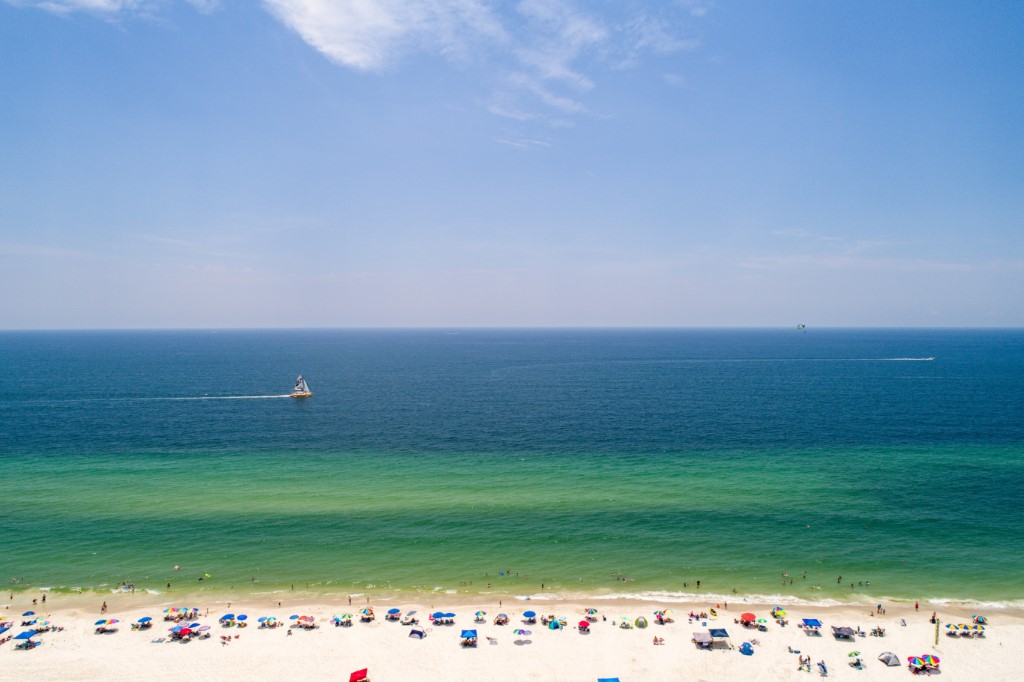 Driftwood Beach truly does live up to its name. It’s filled with loose driftwood and gnarled trees ready to be turned into driftwood, making it quite a unique beach. 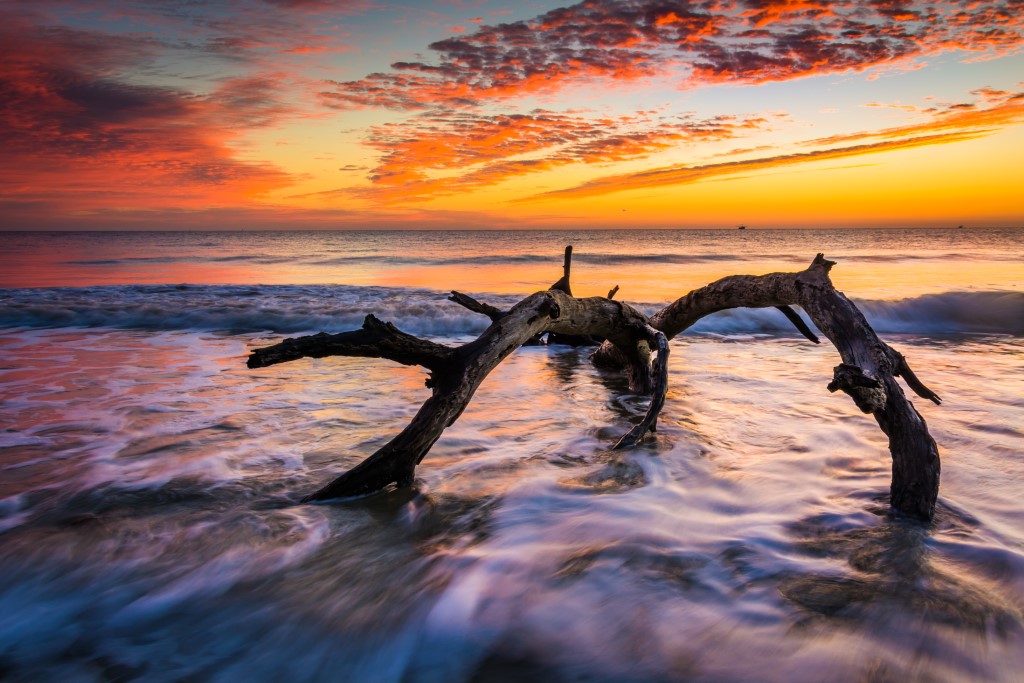 As you drive through Florida, there’s a good chance you’ll see several billboards for Clearwater Beach, one of the best beaches in the world. With gleaming white sand and calm waters, there’s no question of why Clearwater Beach is a fantastic beach to visit.

If water sports are up your alley, Ditch Plains Beach is perfect! The waters at this New York beach are perfect for wakeboarding, boogie boarding, and surfing.

Cannon Beach is a wonderful beach to visit for a stunning sunset. As the sun dips below the horizon, watch the warm colors shine onto vast ocean and the otherworldly rock formations. 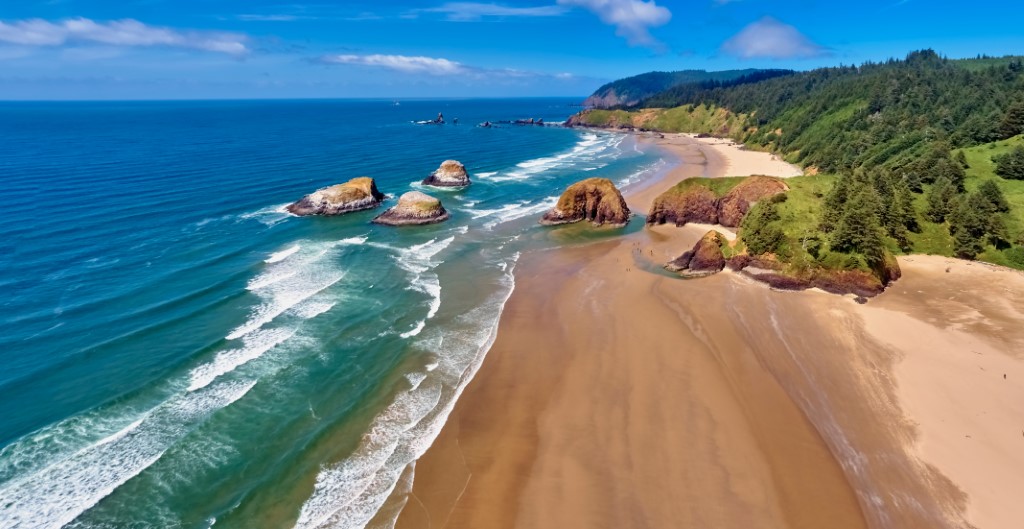 If you’re a surfer, you’ve heard of El Matador Beach in Malibu. The prime surf conditions keep locals and visitors alike coming back again and again.

To reach Shi Shi Beach, you’ll have to do a bit of hiking through a forest, but it is definitely worth it. After your nature-filled adventure, you’ll reach a peaceful beach filled with crashing waves and sea stacks. If you’re lucky, you may even see a few starfish in an array of different colors.

Most of the best beaches in the USA are beaches on the ocean. Sand Harbor in Nevada is an exception to that. Situated on the shores of Lake Tahoe, Sand Harbor’s cobalt blue waters framed by snowcapped mountains are truly a sight to see. 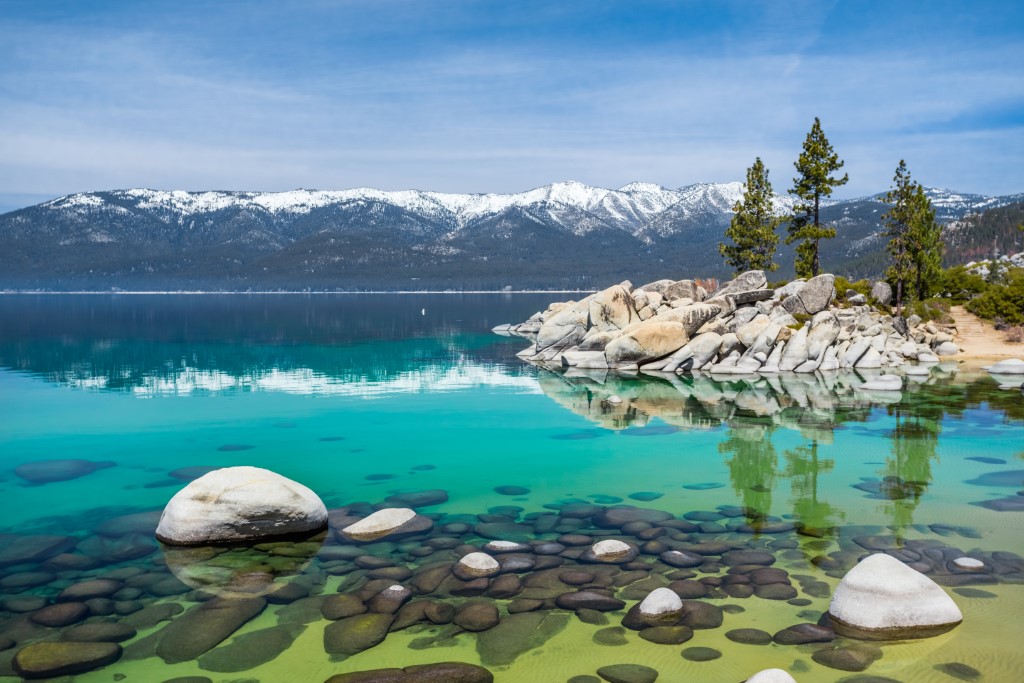 Maine, the northernmost state in the US, is often forgotten, despite the fact that it has so many gems. With both sandy shores and amusement park rides, Old Orchard Beach is definitely one of those gems. 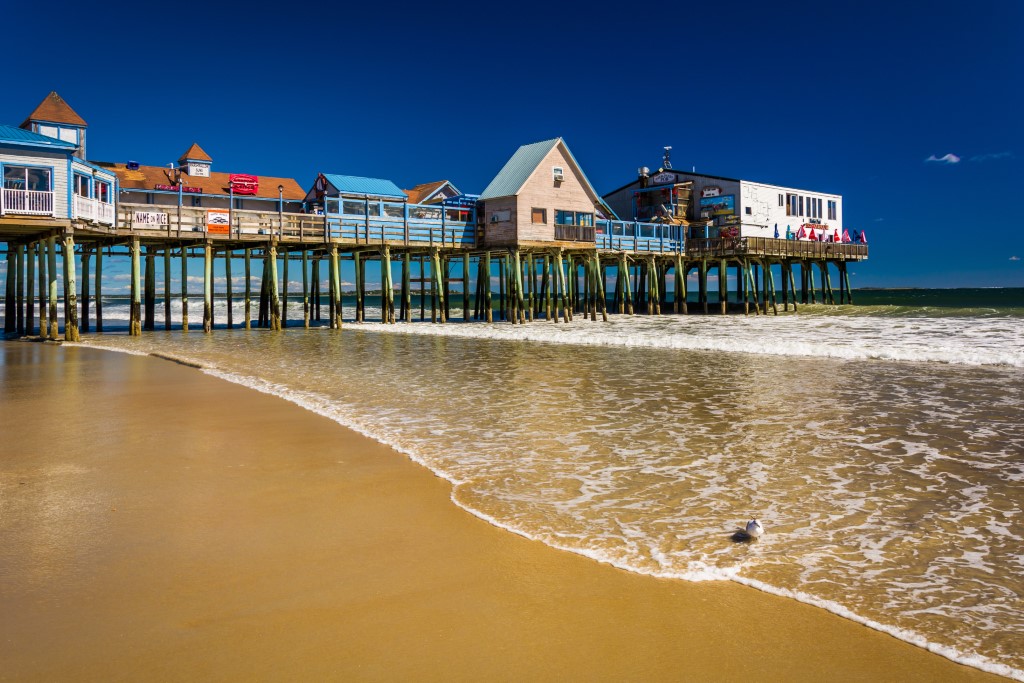 This beach on a U.S. territory is often overlooked when discussing the best beaches in the USA, which is a shame. Visitors consistently refer to Flamenco Beach as a “must-see” beach filled with clear waters and glistening sand. 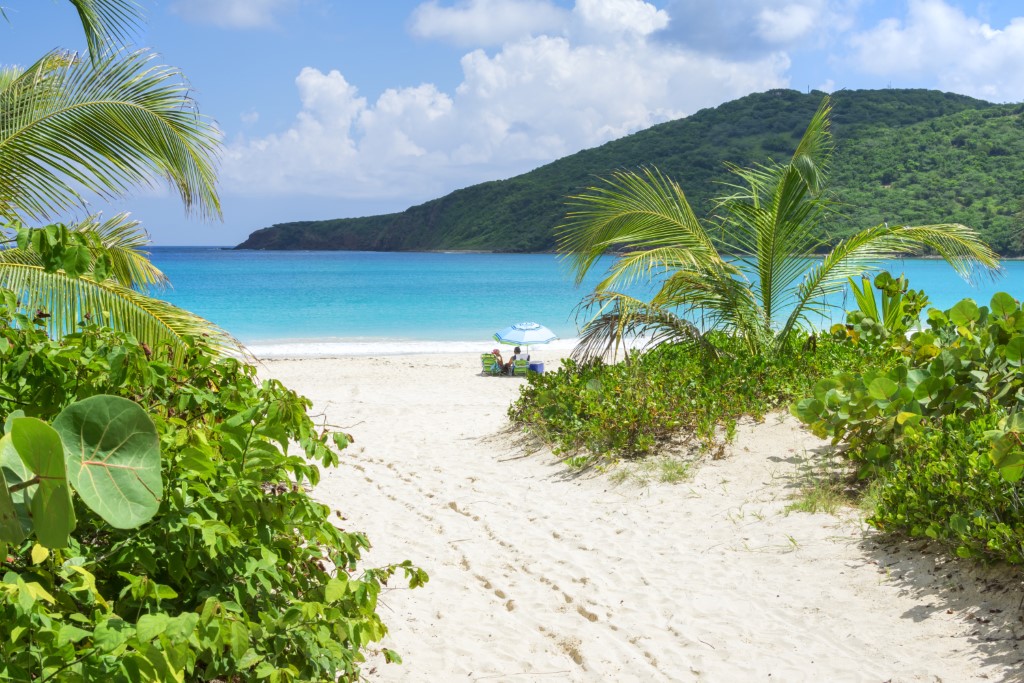 Like many of the other Florida beaches on this list, Pensacola Beach has made a name for itself due to its striking white sand and beautiful blue waters. Pensacola is a great weekend getaway in Florida as well.

Emerald Isle is a lovely stretch of beach in North Carolina. While people flock to this beach to partake in all sorts of beach activities, one of the most popular is kite flying!

This national seashore preserve in North Carolina is filled with hidden gems. With conch shells for shelling, sand dunes for climbing, and waves for surfing, there’s something for everyone at Cape Hatteras National Seashore. 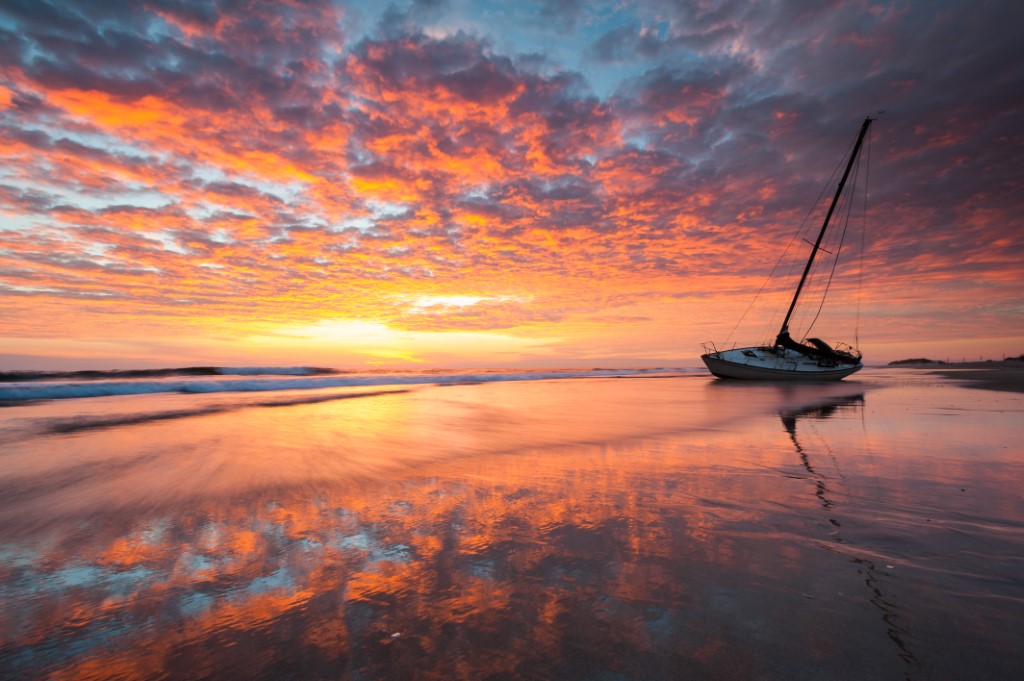 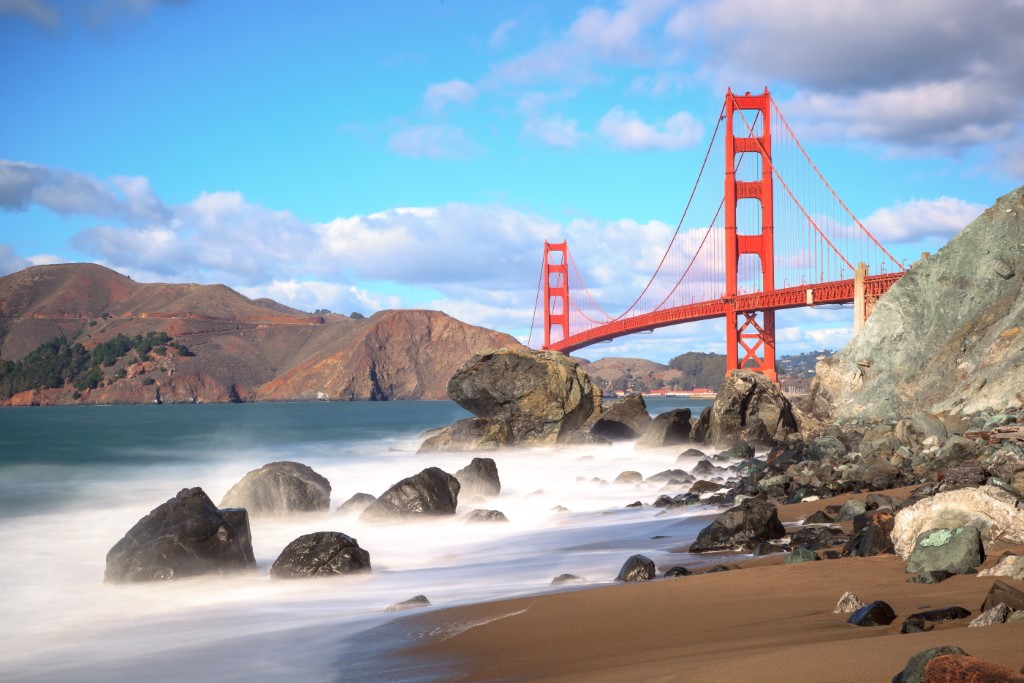 Grayton Beach State Park is hidden along the panhandle of Florida, but it’s immaculate white sand and emerald waters have started to bring this US beach some well-deserved recognition.

Most popular for its three mile boardwalk along the beach and striking white sand. This is a must visit beach if you are in Virginia. 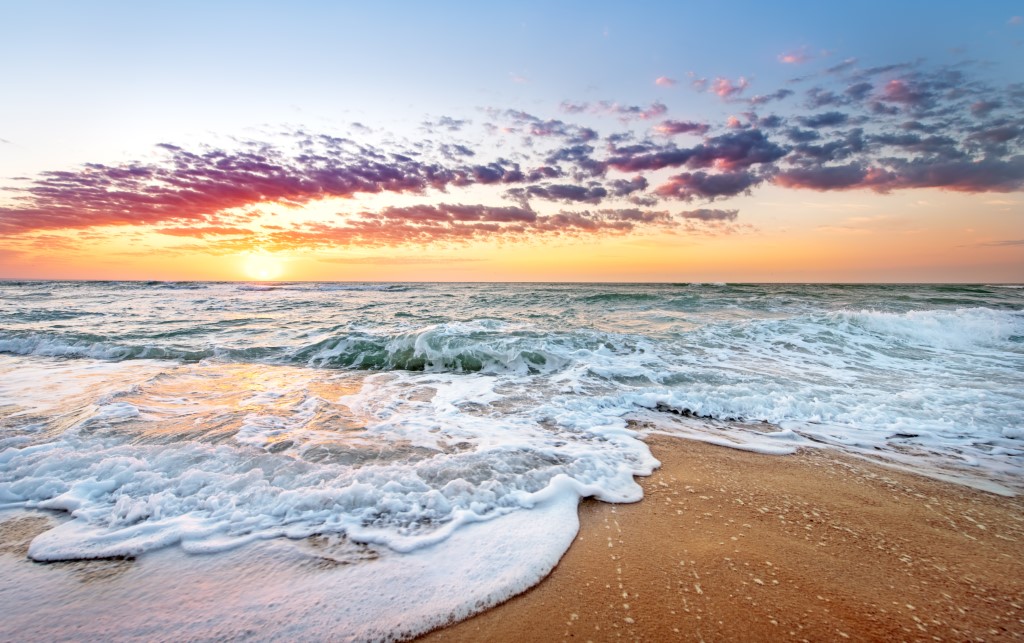 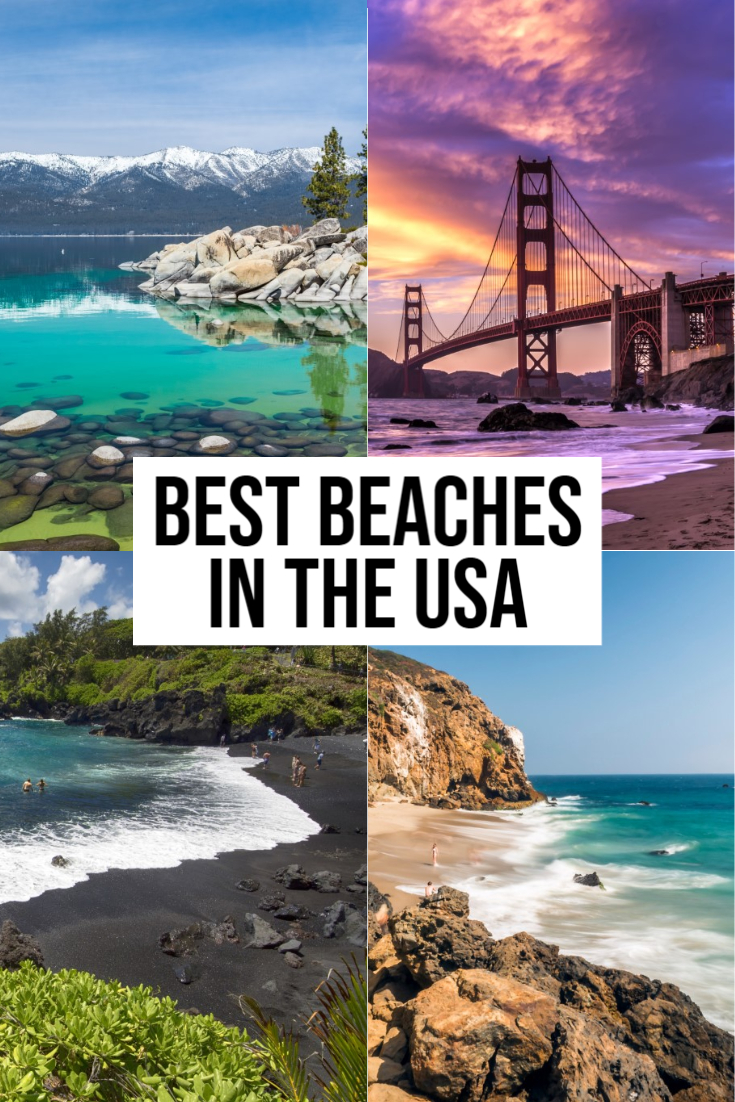