This Italian city, home to one of the largest and busiest ports in the Mediterranean, has been a tourist attraction since the 1800s when affluent gentlemen would visit during their Grand Tour of Europe.

Dating back even further, settlers from Greece broke ground on a settlement there and it has been continuously inhabited ever since! For these reasons, Naples is a hub of activity, drawing hundreds of thousands of visitors every year, making it one of the most beautiful cities in Italy.

Whether you are on one of the many cruise ships that dock at the harbor or passing through en route to other destinations in Italy, one day in Naples will be sure to provide memories and sights to last a lifetime! You could include this one day in Naples as part of a larger six days in Italy itinerary! 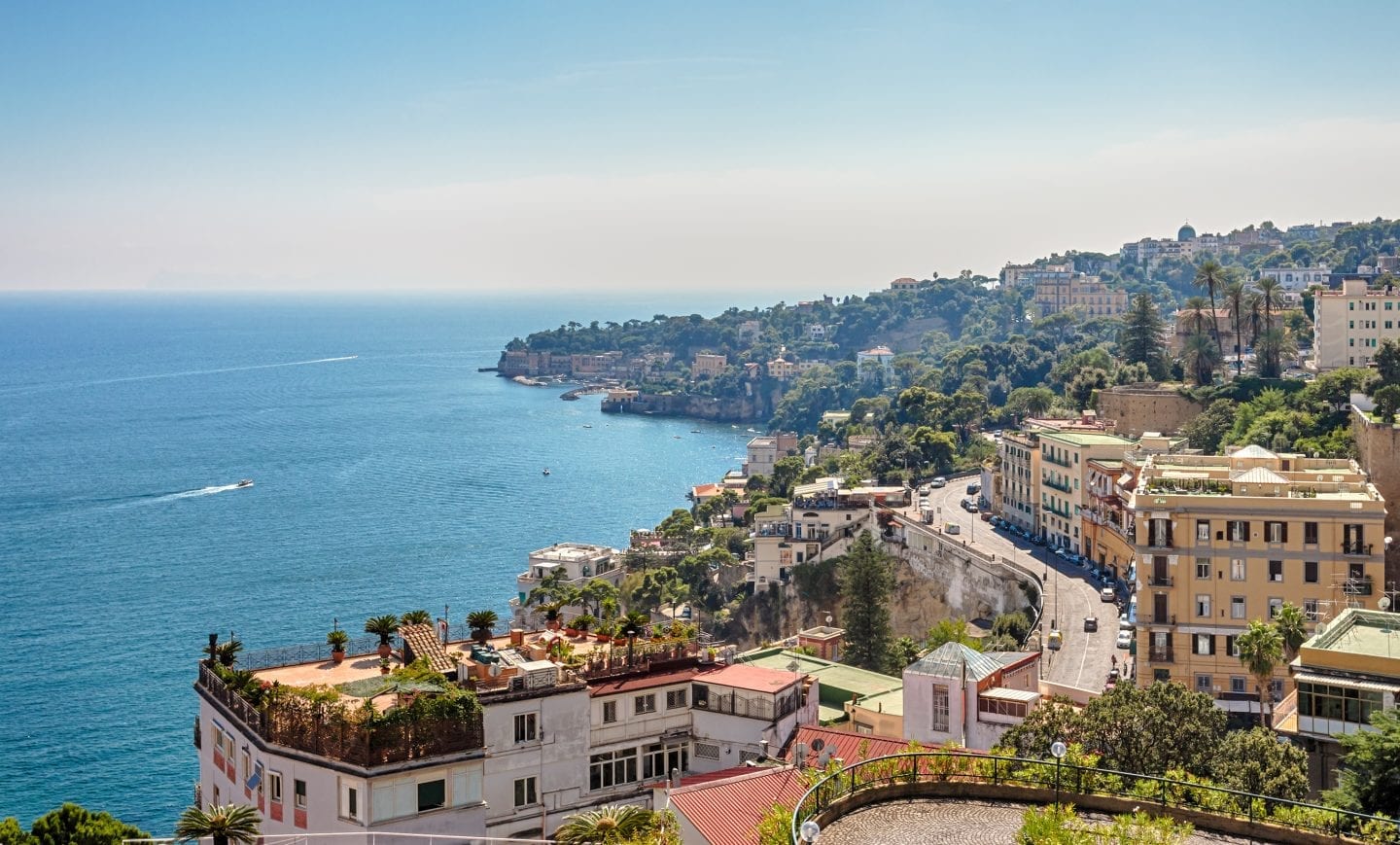 One Day in Naples

Start your adventure at the Naples Harbour

As one of the busiest ports in the Mediterranean, the Naples Harbor is a hive of hustle and bustle year-round. From massive cargo ships to cruise ships filled with tourists, the constant flurry of activity is mesmerizing to watch. The harbor stretches for quite a distance through many different sections and ends at the Porto di Mergellina, a cultural hotspot filled with trendy boutiques, cafes and restaurants as well as a lively taste of local life in Naples.

A quick wander through any of the sections of Naples Harbor is a perfect way to get a taste of what this bustling city has to offer, making it a perfect addition to any itinerary that makes the most of one day in Naples.

Stop at Castel Nuovo near the Harbor

Conveniently located at one end of the busy harbor is the renowned Neapolitan landmark, Castel Nuovo. First built in the 1270s, this massive medieval castle has stood at the harbor of Naples for centuries, making it one of the most recognized of landmarks in the city. Today, the castle is an impressive collection of museums, galleries and remarkable architecture, from the Hall of Barons to the Palatine Chapel.

Additionally, this structure is also home to the headquarters for the Neapolitan Society of Homeland History, as well as their private library collection that includes some of the oldest books ever published in Italy. With so much historic architecture and a history that spans many ages, one day in Naples wouldn’t be the same without a stop at this well-known landmark.

Take in the view from Castel dell’Ovo

Located on what was once an island, Castel dell’Ovo is one of the oldest remaining fortifications in the city of Naples. Founded in Grecian times, it has been a fortified protector of the harbor ever since. Today it is home to numerous galleries and exhibition spaces inside the structure as well as a vibrant little fishing village outside the walls, including a number of trendy restaurants.

One of the most impressive views can be seen from the causeway connecting it to the mainland, which has turned the island into a peninsula. Sweeping views of Naples as well as the Mediterranean can be seen from the causeway as well as the ramparts of Castel dell’Ovo, making it a perfect addition to your list of things to do with only one day in Naples.

EAT PIZZA IN THE CITY IT WAS INVENTED 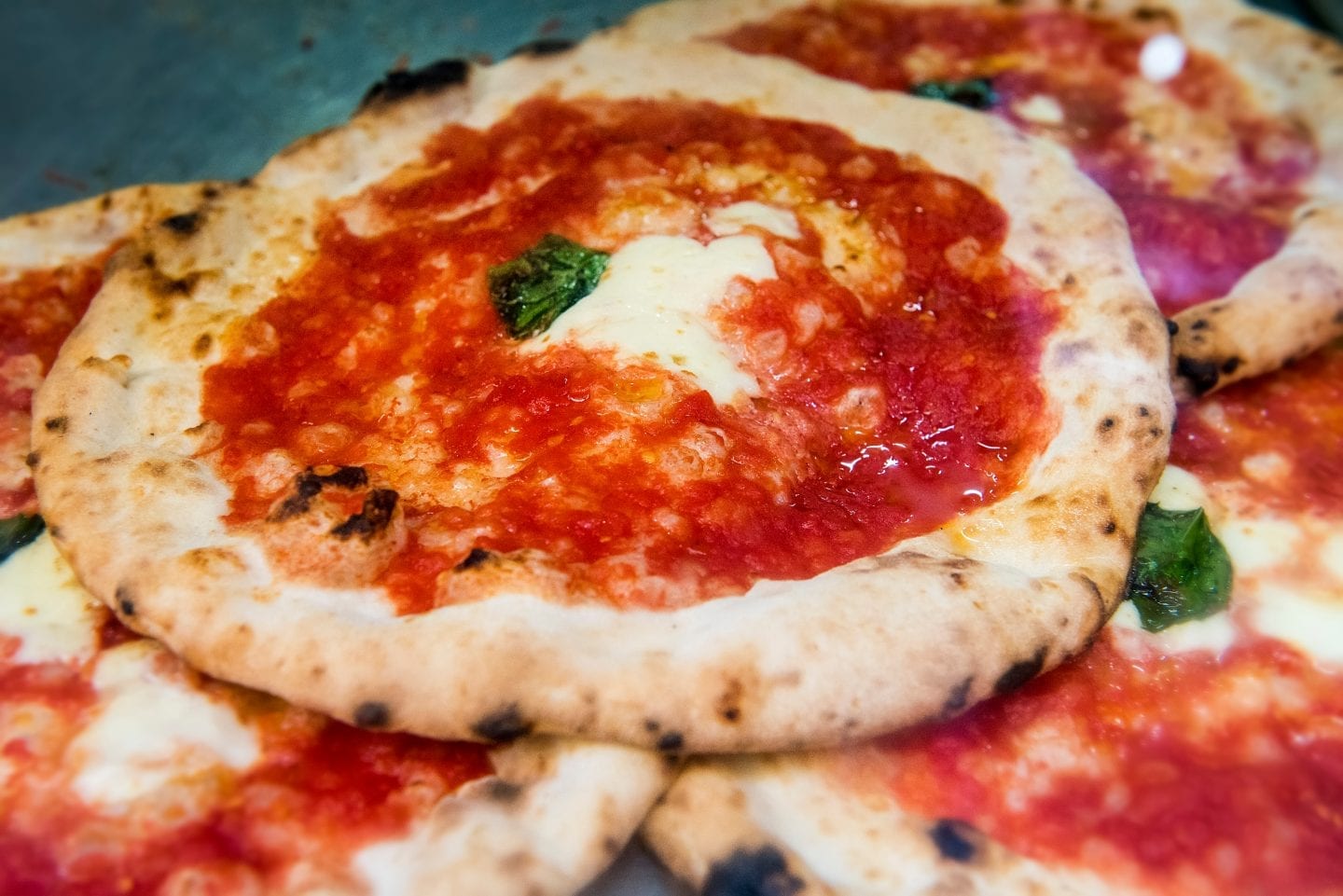 Bask in the grandeur of Piazza del Plebiscito

This centrally located and massive plaza is the starting point for most tours of Naples and is one of the must-see places to visit if you only have one day in Naples. Surrounded on almost every side by truly spectacular historic buildings, it is a very convenient epicenter to explore the history of this Italian city.

From the Palazzo Salerno to the Prefecture Palace, the Basilica Royale as well as the Royal Palace, with statues and colonnades in between, it is truly a stunning display of the power that this city once held. Furthermore, the area is often used as a concert venue for such big names as Elton John and Maroon 5. Just like with piazzas all over Italy and Europe, the Piazza del Plebiscito is a hive of activity for the city of Naples and a site you won’t want to miss.

Marvel at the opulence of Palazzo Reale

Located on the Piazza del Plebiscito is the Palazzo Reale, or Royal Palace. The exterior of the palace is decorated with 12 highly-detailed statues representing kings of Italy and their wealth and power is demonstrated inside the opulent palace interiors.

Lavish throne rooms, massive grand staircases, sweeping halls and the large state theater are all decorated with ornate fixtures and impeccably preserved to reflect the history of the Palace, making this one of the most impressive things you’ll see during your excursion to spend one day in Naples.

Explore the district of Santa Lucia

Just a hop away from the Piazza del Plebiscito is the district of Santa Lucia, the streets narrow and cobbled as they wind their way to the seaside. This district is the perfect addition to your itinerary if you only have one day in Naples for the glimpse of local life it provides to visitors. Small balconies above are home to local Neapolitans, their laundry hung out to dry as their neighbors wander the streets below.

Lined with restaurants and small craft shops, there is a little bit of everything here and the pace is slower than the hustle and bustle of the Piazza nearby. For a chance to get an up close and personal experience of life in Naples, a stroll down the winding streets of Santa Lucia district will offer a unique experience for travelers to this Italian city.

Visit the stunning art and architecture of the Naples Cathedral

Filled with ancient eccliastic artifacts as well as stunning Renaissance and Baroque art and architecture, the Naples Cathedral, also known as the Cattedrale di San Gennaro is the main church in the city of Naples. The walls are decorated in centuries old frescoes amid the tall columns and ornate carvings representing religious imagery.

Step into the chapel of San Gennaro for a peek at the stunning altar as well as vials that are said to contain the blood of two different saints of great importance. For this reason, the Naples Cathedral is often a pilgrimage destination for the devout, making it an important stop during your whirlwind tour of one day in Naples.

Explore the depths of the San Gennaro Catacombs

Located in the northern part of Naples, the San Gennaro Catacombs are a striking and spooky adventure unlike many found elsewhere in the city. With crypts and burials dating back to the ancient times, tours through this multi-level catacomb provide a glimpse back in time through the history of this ancient city, and perhaps even a fright or two. The catacombs are barely lit to preserve the artifacts as well as the ambience and provide a unique and breathtaking experience that will be sure to provide many memories during a trip of only one day in Naples.

Climb to the mouth of Mount Vesuvius 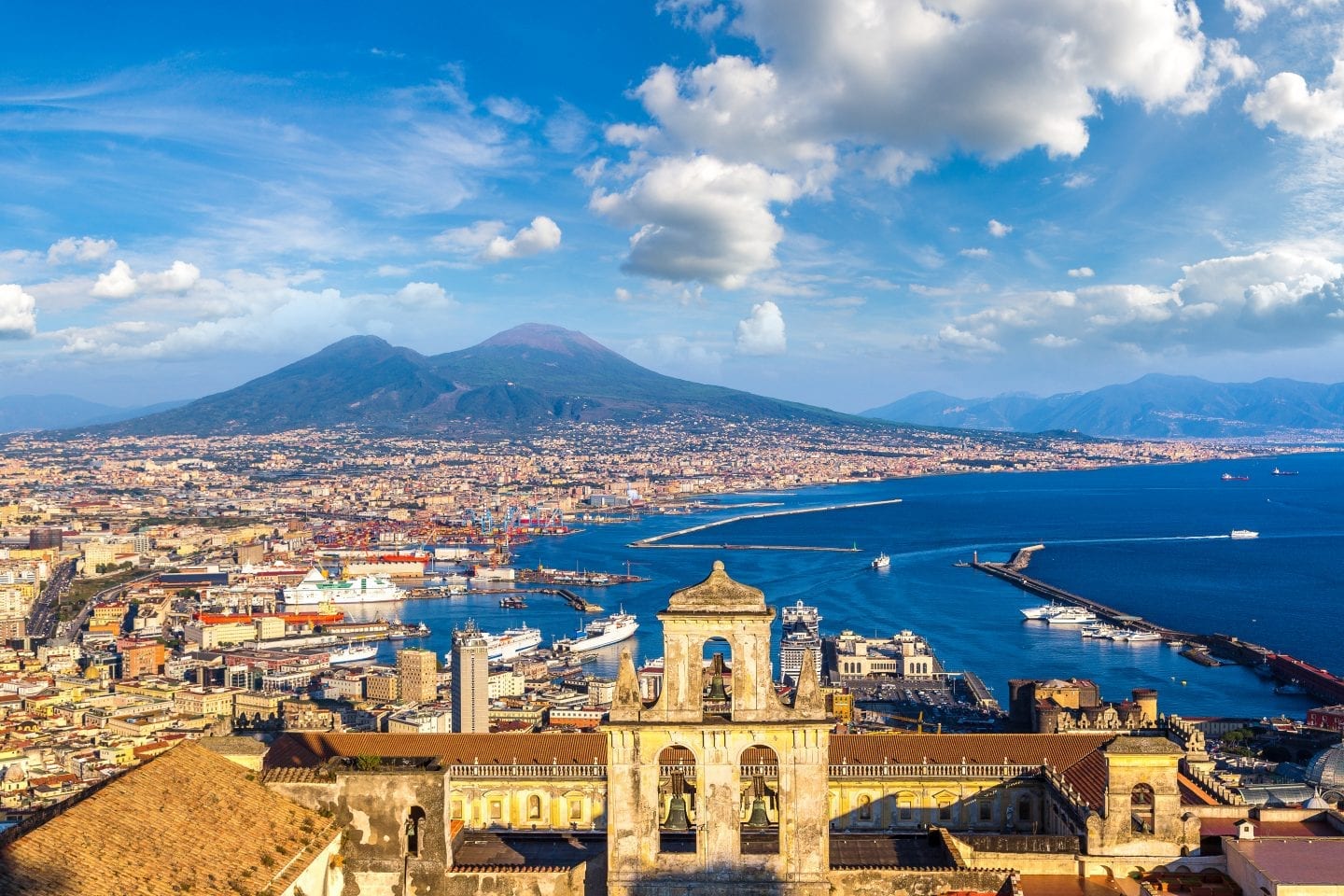 As the only volcano on mainland Europe that has erupted within the last 100 years, Mount Vesuvius is considered one of the most dangerous due to the vast amount of cities and towns that lie within the danger zone of this volcano.

A short bus ride from Naples, an easy 20-30 minute hike up Mt. Vesuvius, the slope reveal stunning views of the area as well as the breathtaking experience of peering down into the infamous volcano that lead to the destruction of Pompeii and Herculaneum in 79 AD. If you only have one day in Naples, exploring a volcano will surely be one of the most adventurous things to add to your list of experiences!

Step back in time at the ruins of Pompeii and Herculaneum

Pompeii is one of the most well-known ancient ruins of the Roman era, the chilling devastation of the volcanic explosion of 79 AD preserved for all time by the ash that rained down so many centuries below. Streets and homes as well as temples and an amphitheater remain well preserved to this day, as well as the iconic plaster casts of the victims of the eruption.

Nearby, the lesser known but technically more well-preserved city of Herculaneum remains almost entirely intact, including the wooden structures, roofs, frescoes, mosaics and painting from the Roman era. You can see the skeletal remains of its inhabitants, offering a chilling snapshot of that fateful day that destroyed so many lives. If you see nothing else during one day in Naples, a visit to Pompeii and Herculaneum will be one of the most striking of experiences to have. 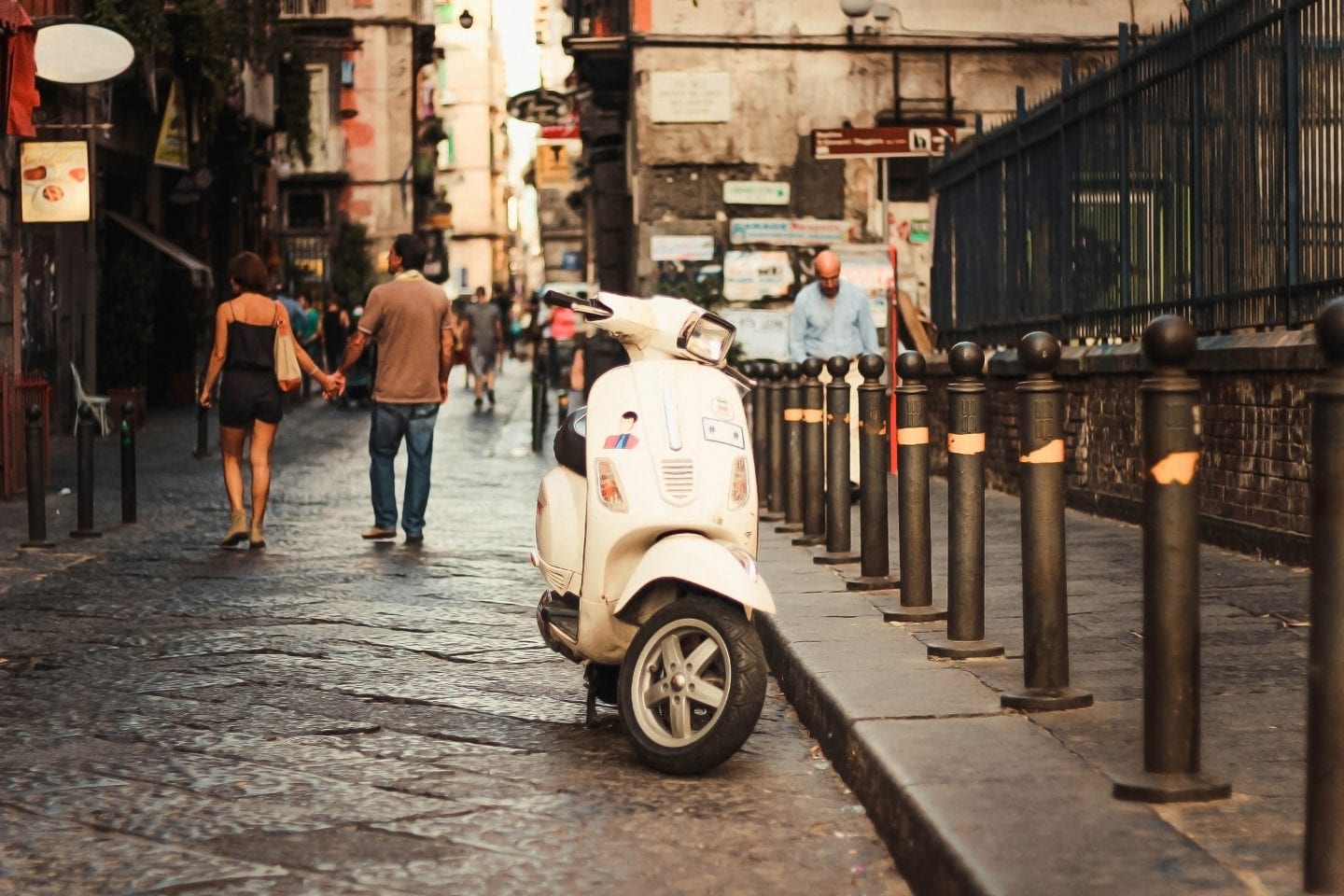 Filled with historical architecture and opulent reminders of its lengthy and storied past, the city of Naples in Italy is a bustling metropolis that is sure to provide experiences and memories for any traveler passing through. If you only have one day in Naples, you will be overwhelmed by the amount of sites to explore as well as the rich history that can be found around every corner.

One day in Naples will leave you wanting more, as there is so much to see and do in this vibrant Mediterranean city. If you have more time in the are, consider visiting Puglia as it is easy to access. 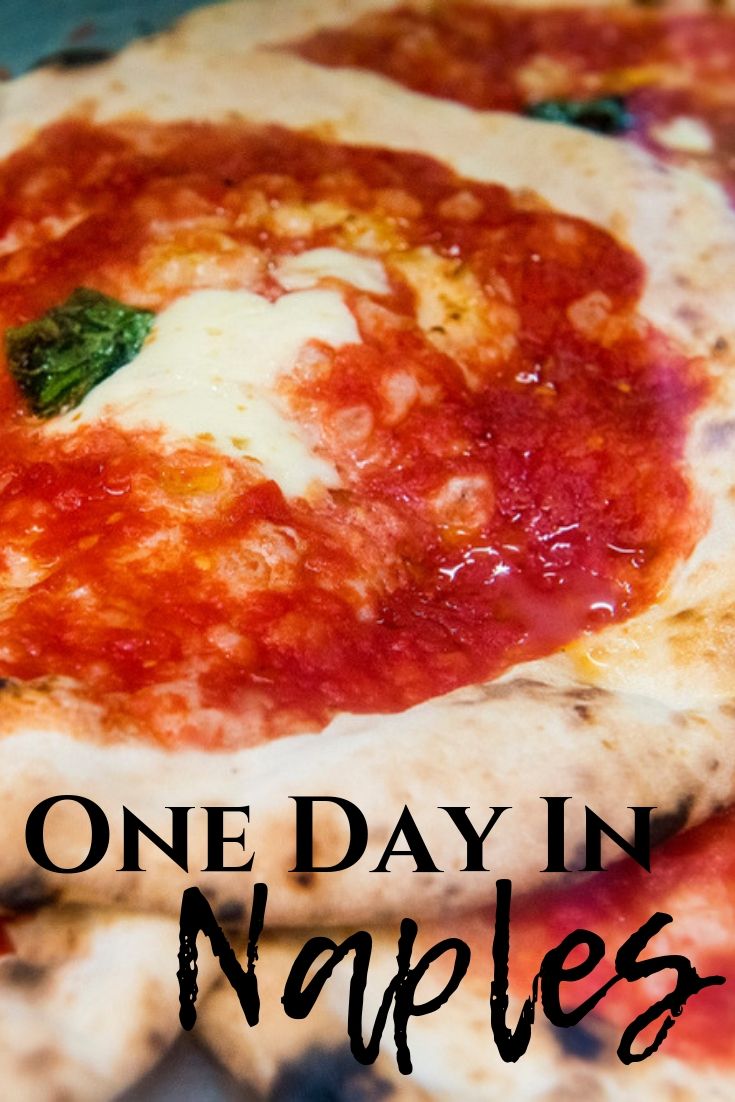 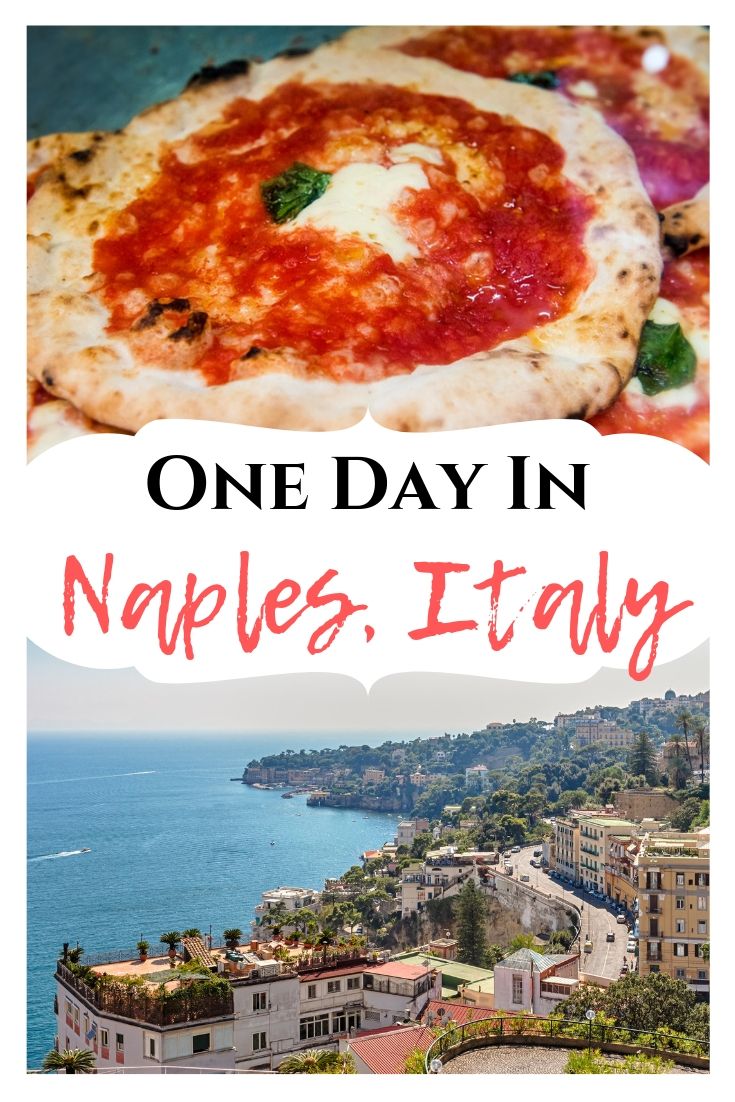