As a major transportation hub on the Adriatic Sea, this Croatia city will inevitably be a layover spot for prolific travelers of the European continent, making it a tourist hot spot for many. If you find yourself with some extra time during a trip, spending one day in Split will reap many rewards and memories for travelers from near or far. Dating back to the 3rd or 2nd century BC, this city is the 2nd largest city in the country of Croatia and filled with history, art, culture and surrounded by natural beauty. This article lists a number of exciting things to do to make the most of one day in Split and should be on your European bucket list! 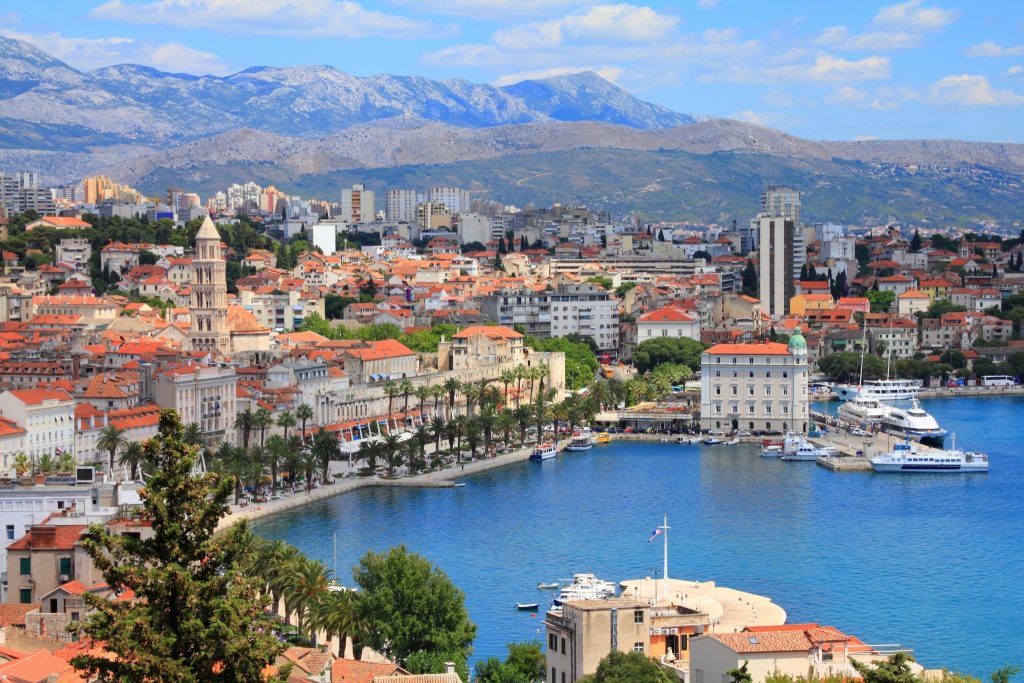 One Day in Split

Adventure on foot with a walk up Marjan Hill

Start your adventure in the city of Split, Croatia with a walk up Marjan Hill. The city is located on a hilly peninsula jutting out into the Adriatic Sea and the best way to get a full view of this ancient fortified city is to walk up Marjan Hill, providing a vast and sweeping panoramic view of not only the entire city but the blue waters of the sea beyond. If you only have one day in Split, there is no better way to take in the city than from above, making the short walk up this hill an absolute must!

Explore the coast up close on Riva Promenade

If you prefer a closer, more intimate view of the city, Riva Promenade runs along the coastline, spanning the entire length of the Old City. With impressive views of the Adriatic Sea and the remote islands as well as numerous cafes, restaurants and shops, this promenade, called The Riva by locals, provides a taste of the idyllic coastal lifestyle that this area of Croatia is famous for. Located near the harbor, the waters of the Adriatic start right at the edge of the promenade which is also home to luxury hotels as well as European-style apartments, making this the perfect start to your explorations during one day in Split.

You can’t go anywhere in Split without seeing or hearing about Diocletian’s Palace, making it an impossible to miss attraction during your one day in Split excursion. In fact, the vast majority of the city center and the Old City is located within the walls of this luxury Roman villa and fortress. Built around 298 AD, the grounds of the palace are bisected by two main streets that divide the city into four distinct quarters, each one ending in a large gate. The Gold Gate, or Northern Gate, is by far the most famous. Over 1,000 live permanently within the walls of the city, and the marvelous history and architecture draws large crowds of tourists who enjoy the cafes, restaurants, museums, galleries and events that take place throughout the year. Fans of Game of Thrones, the popular television series based on the books by George R.R. Martin, can take a custom themed tour of the filming locations that can be seen in many of the seasons of the show, including the basement of the Palace where the infamous dragons were housed during season 5. 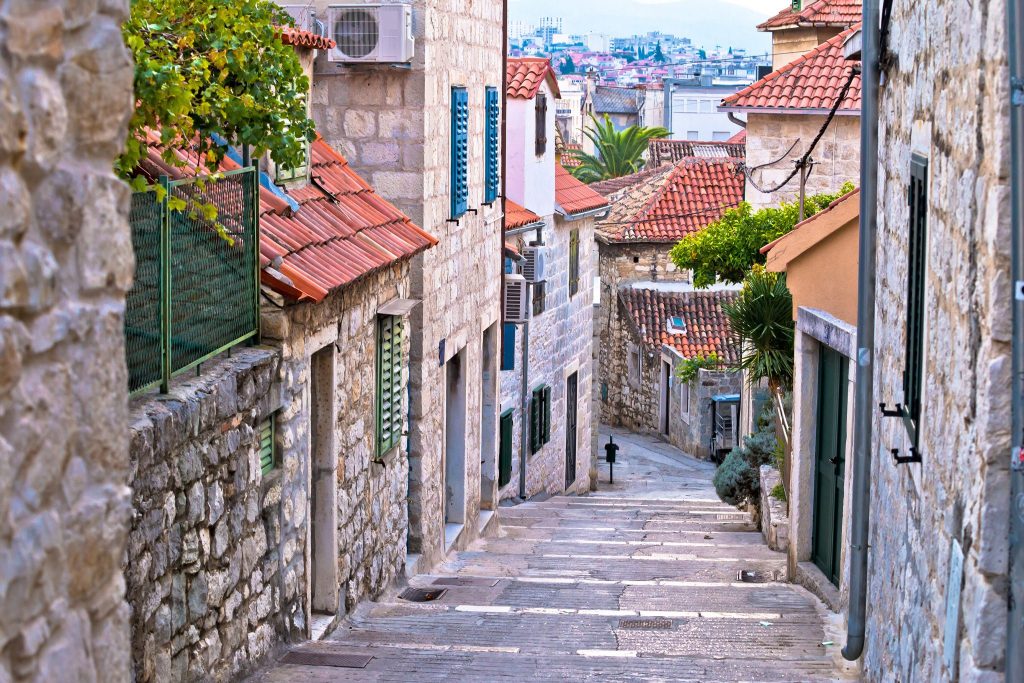 Given that the palatial grounds of the Diocletian Palace are made up entirely of the Old City, there is so much to see and do before or after your tour of the Palace itself, making tours of this area of the city one of the best ways to see as much as possible if you only have one day in Split. The area is now filled with cafes and restaurants, but one of the most remarkable is a large black granite Egyptian sphinx, the last of its kind in the world! Nearby, the aptly named Luxor Cafe provides a cushioned resting place to people-watch and bask in the historic scenery while sipping some of the locally made wines. Also nearby is the Temple of Jupiter, a Roman era temple built as a part of the original palace. Diocletian actually believed himself to be a reincarnation of this Roman god! Refreshed from the afternoon pick-me-up, you can explore more of the sites, including Voćni Trg or Fruit Square, the location of the old fruit market in ancient times. If you want an even better sense of the history of the area, you can stop at either the Ethnographic Museum of Split or the Archaeological Museum of Split, each one offering unique artifacts from the lengthy history of this Adriatic coastal town.

Marvel at the oldest Catholic church in the world, the Cathedral of Saint Domnius

Originally a Roman mausoleum dedicated as a shrine to Diocletian himself, this cathedral was

Built up around the octagonal structure, over time becoming the grand structure it is today. Between the 13th and 16th centuries, various additions and artfully carved stone and wood ornaments were added, including the massive wooden doors of the church and the towering bell tower. If you only have one day in Split, it is highly recommended that you climb to the top of the bell tower for a bird’s eye view of the city of Split as well as the sprawling palatial grounds of Diocletian Palace. 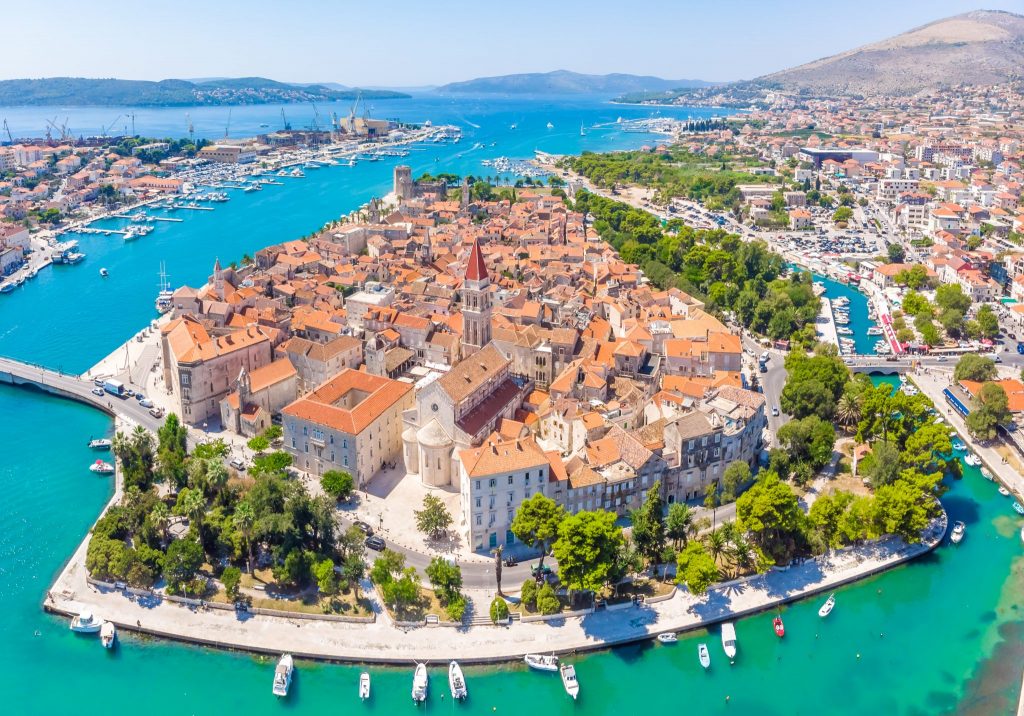 Located within a short distance of Split is the historic town of Trogir, listed alongside the Diocletian Palace and other sites within Split as an UNESCO World Heritage site. Far less crowded than Split and offering spectacular views of the Adriatic along narrow streets and ancient architecture, this small city has shops, cafes and a 13th century cathedral of its own. From there, it is an easy boat ride to the famed Blue Lagoon nestled between two small islets and the larger island of Drvenik Veli. The pristine blue waters have a white sand bottom and can often provide views of dolphins in their natural habitat along the pebbled beaches that surround the lagoon, making this a perfect place to relax, even if you only have one day in Split.

Take a day tour of the Blue Cave and Hvar Town

Intrepid travelers seeking a truly once in a lifetime experience can make the most of one day in Split by taking a speedboat tour to the nearby Blue Cave located on Biševo Island. Entering this protected grotto reveals the breathtaking natural wonder of the steep cliff walls illuminated in a bright turquoise blue light by the unique phenomenon of light from high above reflecting off the blue waters and pebbled beaches inside the cave grotto.

From there, the tour continues past the nearby Pakleni Islands, a series of 14 small and uninhabited islets, untouched by man in the Adriatic Sea. The tour winds down with a stop at Hvar Island, its greatest claim to fame being the title of “sunniest island in the Adriatic Sea”. With so many things to do in Hvar, you won’t want to miss it.

It averages well over 2,700 hours of sunshine a year, even offering a money-back guarantee if you visit on a day that happens to be foggy, which is a pretty safe bet to make since it only happens about twice a year! Pine forests surround the quaint Hvar Town, which boasts an impressive history of its own! Home to one of the first public theaters in Europe as well as castles, fortresses, churches and Venetian palaces that have been turned into a variety of shops, cafes and restaurants. For a sense of stepping back in time, grab lunch at a konoba, or traditional Croatian restaurant. Dedicated to preserving the foods, customs and culture of Croatia cuisine and life, konobas are decorated in a rustic and time-honored tradition, often acting partially as museums with decorations of old tools, furniture and supplies used in traditional Croatian food production. One such is Konoba Menego, nestled between the main square of the city and a castle, boasting candlelit meals of local cuisine including goat cheese, octopus salad, cured olives and locally created wines by the carafe. Enjoying this authentic experience is sure to be one of the most memorable things you do during one day in Split! 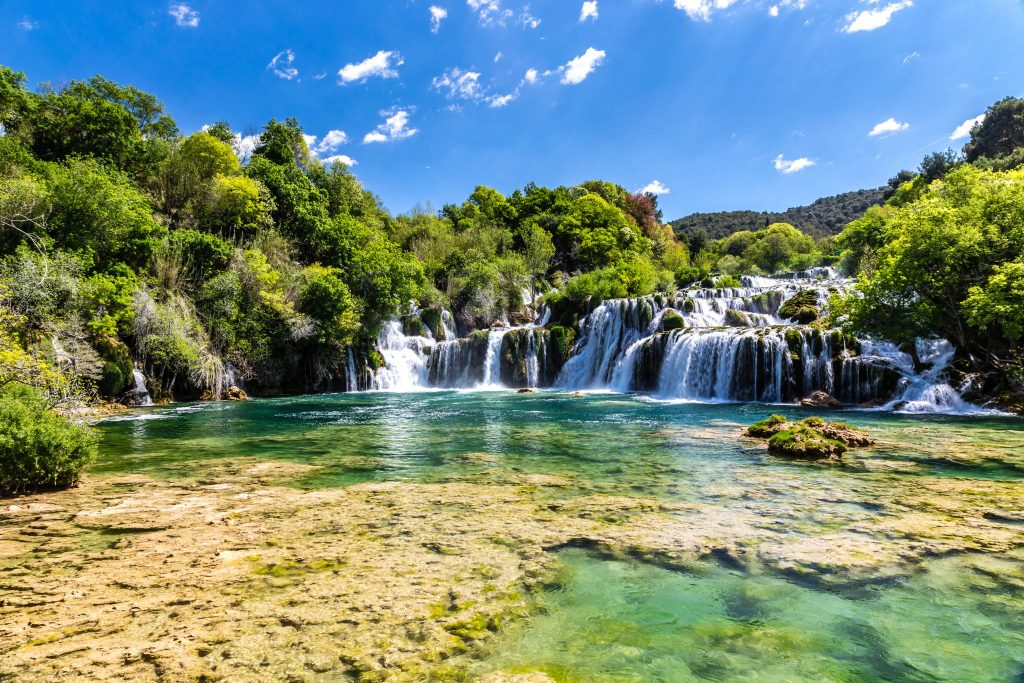 Another way to escape the bustle of the city is to head to the Krka National Park, only an hour away from the city center of Split! A quick jaunt to this park will provide gorges, dense woodlands of pine, crystal clear lakes and rivers as well as some of the most breathtaking waterfalls in this area of Croatia. Stroll the wooden boardwalk through the forest before taking a dip in the lower lake at the base of the falls. Home to the first hydroelectric power station in all of Europe, this area boasts a history of using water power, something that can be further explored in the nearby Ethno Museum, housed in one of the historic mills along Krka River! For those seeking to escape the hustle and bustle of narrow streets during one day in Split, this excursion provides a perfect opportunity to surround yourself with nature and enjoy the fresh air before continuing on your travels! 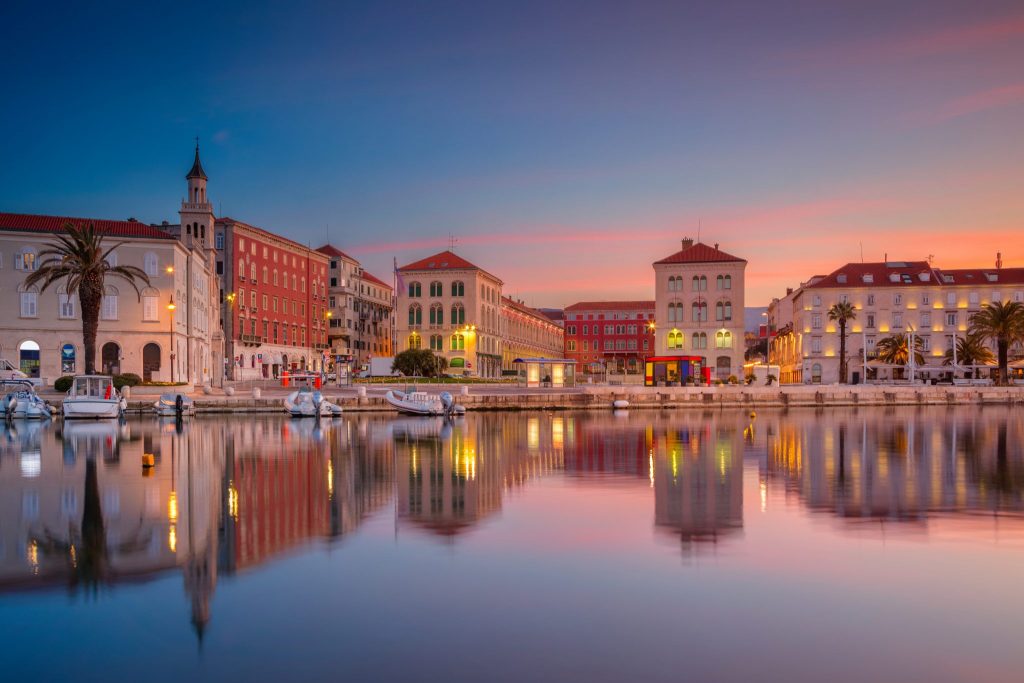 Housed almost entirely in an ancient Roman Palace, the city of Split, Croatia is a city full of surprises and unique history surrounded by breathtaking natural wonders. Quickly becoming a major destination for visitors from around the world, be sure to make the most of one day in Split, basking in the ancient architecture, natural splendor and refreshing Mediterranean breezes as you take in the sweeping views of the Adriatic Sea. One day in Split will leave you yearning for more, so be sure to make the most of your time while you are there! Whether you come on a cruise or passing through the country, you are going to fall in love with Split. 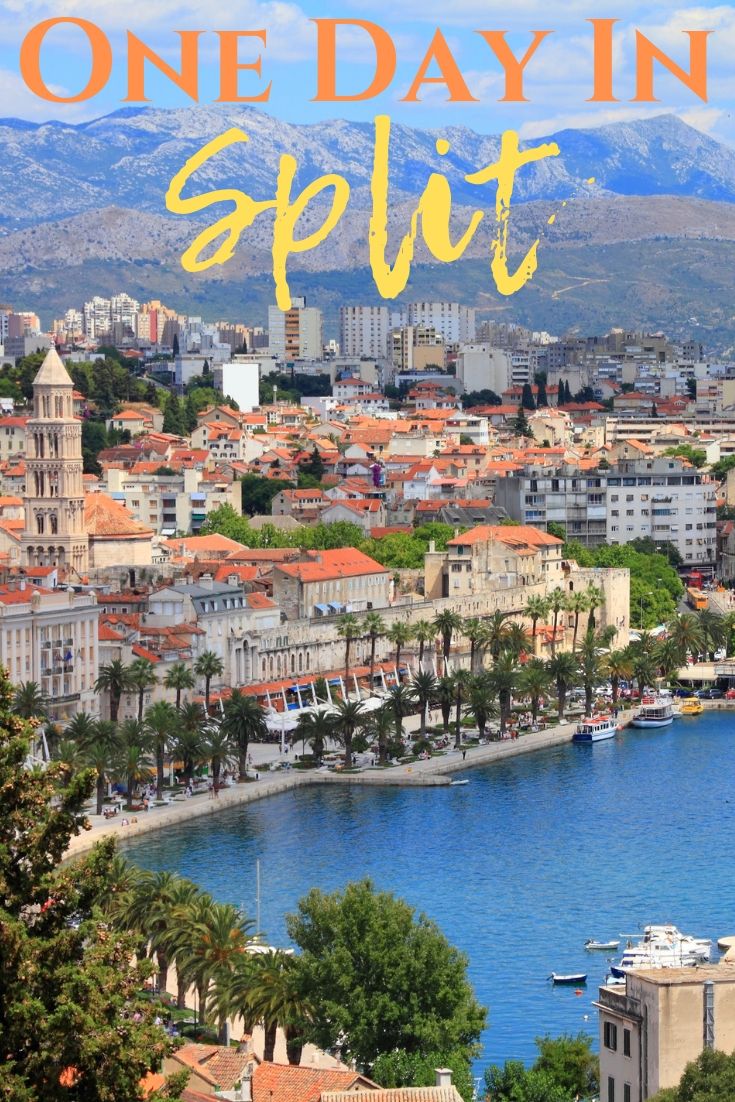 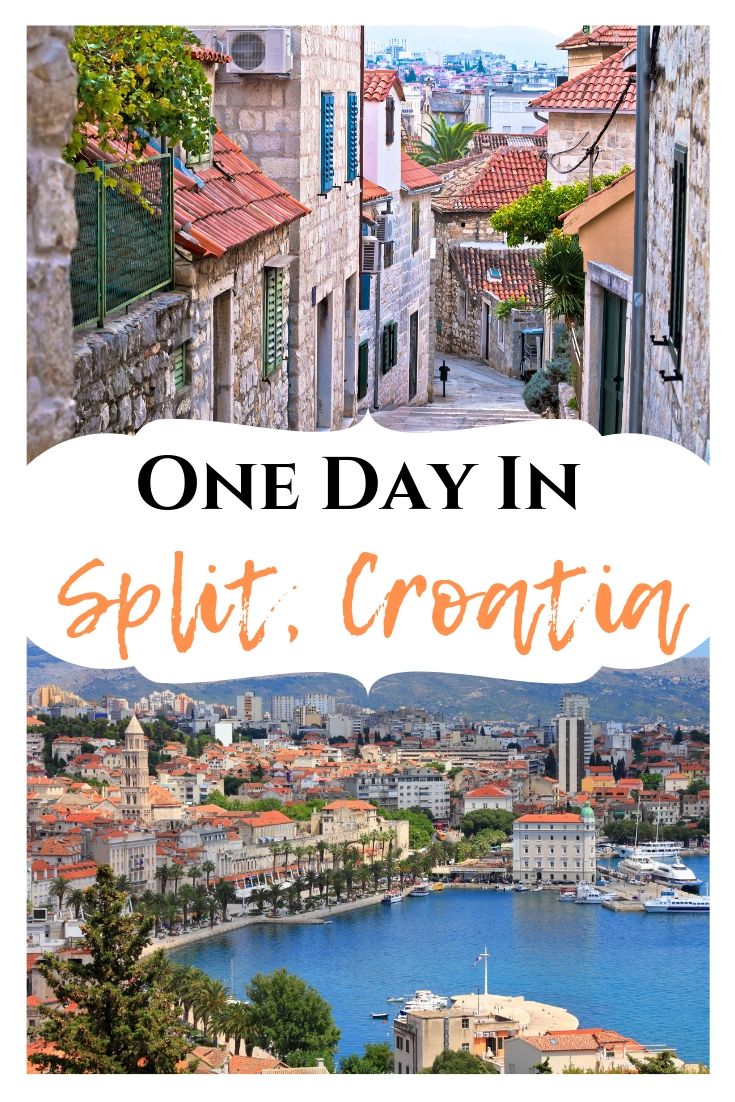