Located on the Puget Sound in the state of Washington, Seattle is a hip and trendy city attracting a large number of tourists every year. With a storied history, vibrant art scene, abundant influence from the technology sector and an open and welcoming population, Seattle is ranked near the top of the list of desirable places not only to visit but also live. When planning your own trip to this lively city, check out this article about interesting Seattle facts to keep in mind when visiting! 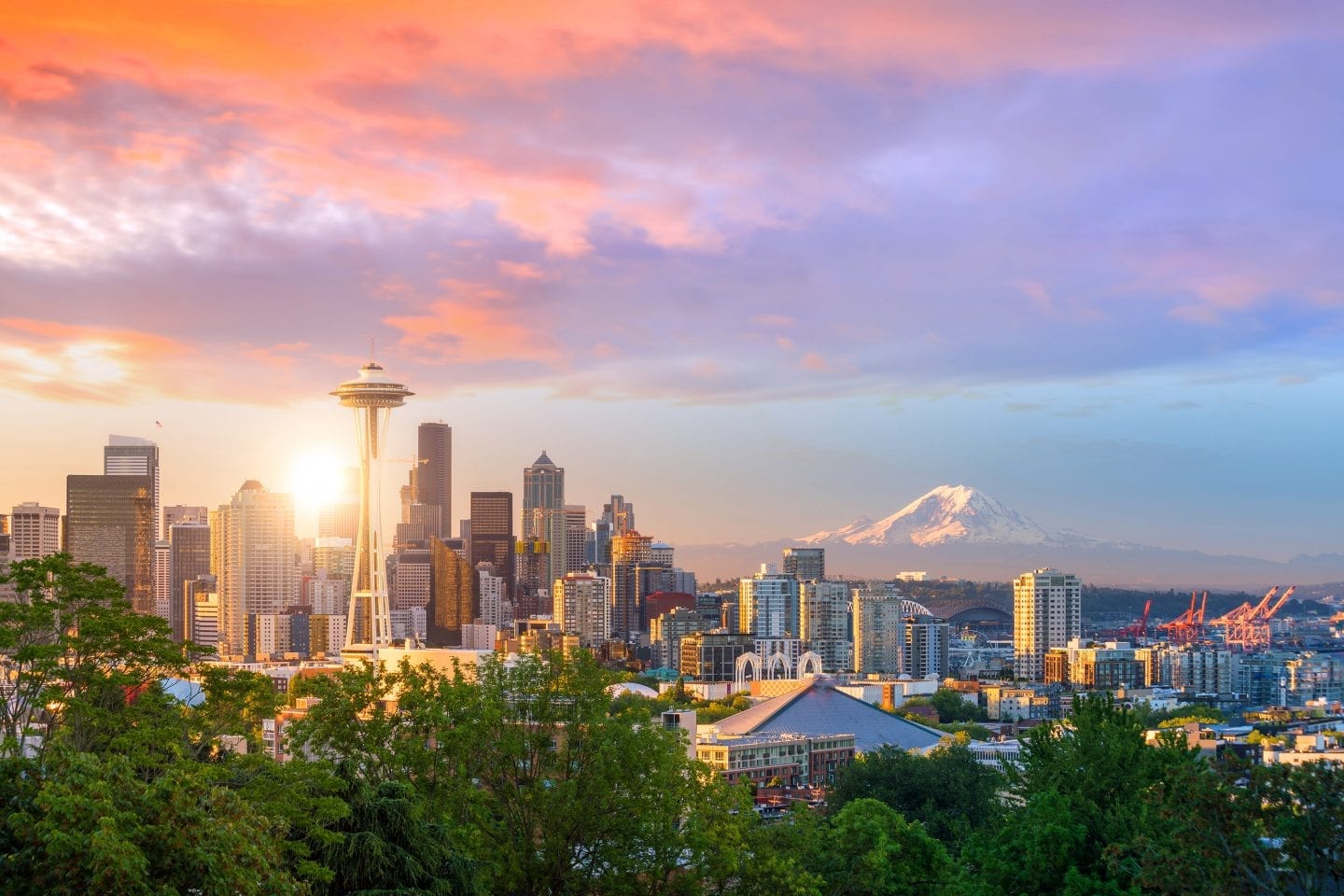 Nestled between the Olympic Mountains and the Cascade Mountains, Seattle is settled on a series of hills on Puget Sound’s eastern shore. The Cascade Mountains shield Seattle from westerly air currents creating a mild and moist climate with warm winters and cool summers. This moderate and stable year-round weather accounts for the large amount of lush greenery that surrounds the city. No matter the time of year, Seattle is home to towering evergreens and vibrant greenery, both inside and outside of city limits. The city is home to several full forests including Discover Park and the Washington Park Arboretum. The city of Seattle, Washington has earned the nickname “The Emerald City” because of the year-round greenery, a Seattle fact that attracts outdoor adventures all year round.

The lush landscape is also due in part as a result of Seattle’s rainy climate. Ironically, the summer months tend to be less green due to the lessened rainfall, a Seattle fact that might come as a surprise to many who have heard the reputation of Seattle as a constantly rainy locale. With an average of 152 rainy days per years, Seattle is aptly called the Rainy City. One of the most surprising of Seattle facts is that despite so many rainy days, the amount of rain that does fall usually isn’t that much. Typically, only 5 days out of the year will see more than 1 inch of rain, and overall, the city only averages 37.5 inches of rain per year which is just slightly less than the national average of 38 inches. The majority of rainfall occurs during the fall and winter seasons.

Seattle is home to the fourth largest sea ports in the United States due to its location on the western coast as well as its access to the ocean via the Puget Sound. The accessibility of the city of Seattle also played a pivotal role in its history as a Gold Rush town. In 1896, the Klondike Gold Rush took America by storm when gold was discovered in the Klondike region of Canada. Seattle was established as a supply city as miners flocked to Canada and Alaska. Seattle was also the main point of transportation between the US and the gold fields. It is said that this rush ended the depression in Seattle overnight, one of the Seattle facts that prove this city has been a pivotal area for a very long time.

While the city grew in size due to the Gold Rush, its history goes back even further than that. The land that Seattle resides on has been inhabited for at least 4,000 years. This claim is supported by evidence of continuous human in habitation dating back to the 6th century A.D., one of the Seattle facts that indicates its wealth of history and culture. In the mid-1850’s 13 villages made up the land and were inhabited by the indigenous Coast Salish peoples. This is also around the time when American pioneers began to settle upon the land that is now known as Seattle. This eventually led to tension between European-American settlers and the native people. In 1869, Seattle was officially incorporated as a town.

In addition to a wealth of import and export trade, Seattle is also a vibrant technology hub. Seattle is home to tech giant Microsoft. The company was originally started in New Mexico but the founder, Bill Gates, decided to relocate it to his hometown in Seattle. As a result, Seattle has become a major tech scene in the US with both Microsoft and Amazon residing there, another of the many Seattle facts that are appealing to those visiting as well as those relocating for work!

While it might be a tech giant today, Seattle’s roots are more humble than that. Early in its history, Seattle relied on its timber resource to build its economy. The trees at that time were between 1,000-2,000 years old and went as tall as 400 feet and covered the majority of Seattle. Today, no trees of this size remain anywhere in the world. After Henry Yesler brought a steam powered sawmill to the area, Seattle dominated the lumber industry. But lumber isn’t the only thing this city traded in at the time. One of the most surprising of the Seattle facts is that at one time, they imported women! In 1864, settlers noted a lack of marriageable women. Pioneer Asa Mercer took two trips to New York to bring back 100 women who would become known as the Mercer Girls.  Mercer drew much criticism over this project due to modesty concerns over importing women to the frontier, and so his first trip was mostly unsuccessful, returning with only 8 women. Mercer contributed this to lack of incentive for the women to relocate to the other side of the country. So, prior to his second trip, he solicited donations from lonely pioneers with the promise of returning with 500 eligible women. However he only managed to return with under 100. This series of events since inspired the basis of the television show “Here Come the Brides”.

In 1889, Seattle nearly burned down due to a fire caused by a glue pot. The fire burned 29 blocks, destroying nearly the entire business district, all railroad terminals, and all but 4 wharves. However, from the ashes, a new Seattle was rebuilt, creating job opportunities due to the amount of construction. As a result, the city grew from 25,000 to 40,000 inhabitants. This rapid growth is another of the Seattle facts that still remains true today. Seattle has remained in the top five of fastest growing cities for nearly five years in a row!

Seattle is home to many attractions for visitors to enjoy, including the Woodland Park Zoo, the Seattle Aquarium, numerous art galleries and musical venues and the Seattle Great Wheel, one of the largest Ferris wheels in the entire US and the largest such attraction in the Pacific Northwest region. Seattle is also one of the largest departure points for cruise ships heading to and from Alaska, with well over 800,000 people passing through this city to take cruises along the west coast and to Alaska, one of the lesser known of the Seattle facts.

In addition to the above, one of the most well-known Seattle attractions is the Space Needle. Towering 605 ft. tall, the Space Needle is the most iconic landmark in Seattle, boasting three viewing areas, a café, and a wine bar. It was conceptualized in 1961 by Edward F. Carlson, chairman of the 1962 World’s Fair, who wanted a restaurant in a tower at the fair. With the help of architect John Graham, Carlson’s dream was realized in just under a year! The most fascinating part of this story? One of the most mind-boggling of the Seattle facts is that the design of the Space Needle was originally drawn on a paper napkin! Now it is one of the most recognizable structures in the world.

Another major draw for tourists is the vibrant music scene. While it was originally a popular jazz hotspot, the city of Seattle, Washington later gave rise to a musical genre all its own. Seattle is said to be the birthplace of grunge rock as many alternative bands emerged from the region in the 1980’s and 1990’s. These bands include Nirvana, Pearl Jam, Soundgarden, Alice in Chains, and Blind Melon. Although grunge music has declined in popularity, it has influenced the more socially conscious modern rock that we listen to today, one of the Seattle facts that this city is proud to display. Music lovers can explore the history of the grunge era at the EMP Music Museum in Seattle.

After all this exploring, weary travelers can find themselves the perfect cup of coffee at one of the original Starbucks locations. With over 30,000 locations worldwide, this Seattle born business has become a household name. Its humble beginnings go back to 1971 when three teachers–Jerry Baldwin, Gordon Bowker, and Zev Siegel—joined forces to open a store called Star Bucks Coffee, Tea, and Spice. By 1997, Starbucks had expanded overseas and continues to provide much needed pick me ups to people all over the world. And to think it all started in Seattle by three teachers who simply shared a passion for hot, flavored beverages. This is one of the Seattle facts that will help you warm up out of the rain during a trip around this vibrant and bustling city!

Filled with history, innovation, art and culture, the city of Seattle, Washington is an exciting and vibrant place to visit, whether your destination is the city itself or points further. Be sure to spend some time wandering the piers, galleries and sites before venturing into the lush green forests that give this city its nickname. With so much to offer, be sure to keep these Seattle facts in mind when planning your trip so you don’t miss a single thing this exciting city has to offer. 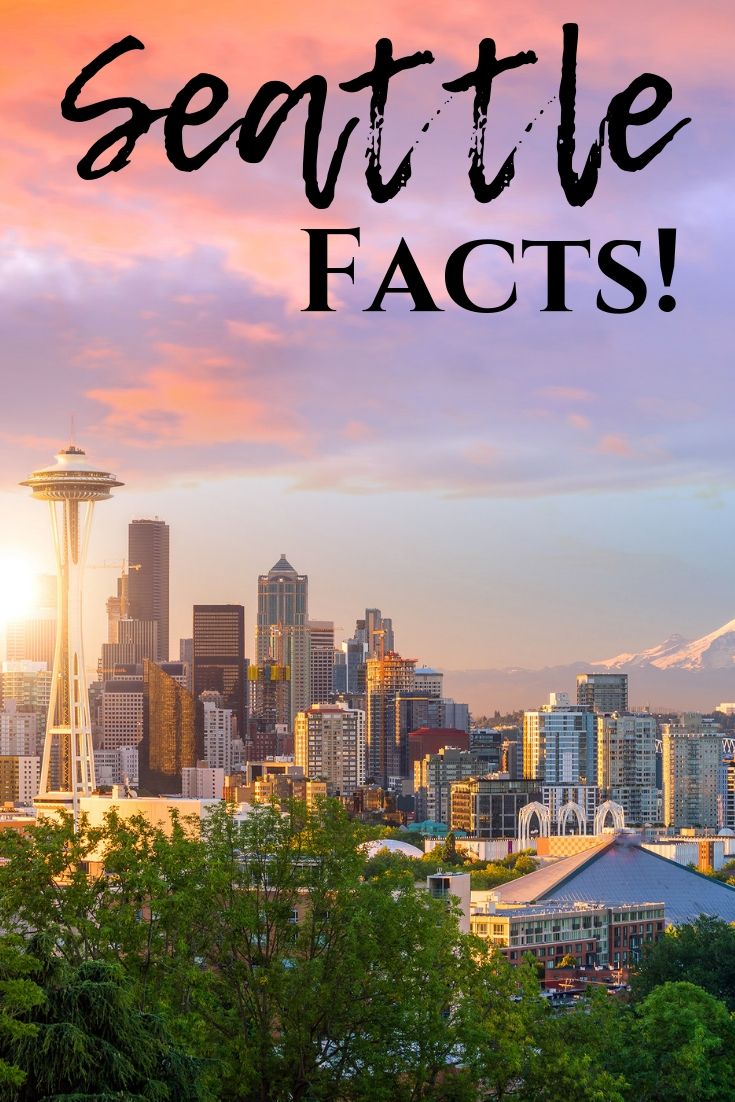