Don’t let the small size of this Greek island fool you; there are so many exciting things to do in Mykonos, making this a must for any traveler headed to Greece.

The fact that this island has on average over 300 days of sunshine every year makes it a tourist hot spot year-round. Whether you seek culture, history, outdoor activities or simply a chance to relax in the sun, there is something for everyone on this little Aegean island!

When planning your trip to this sunny island paradise, check out this list of the top ten things to do in Mykonos. 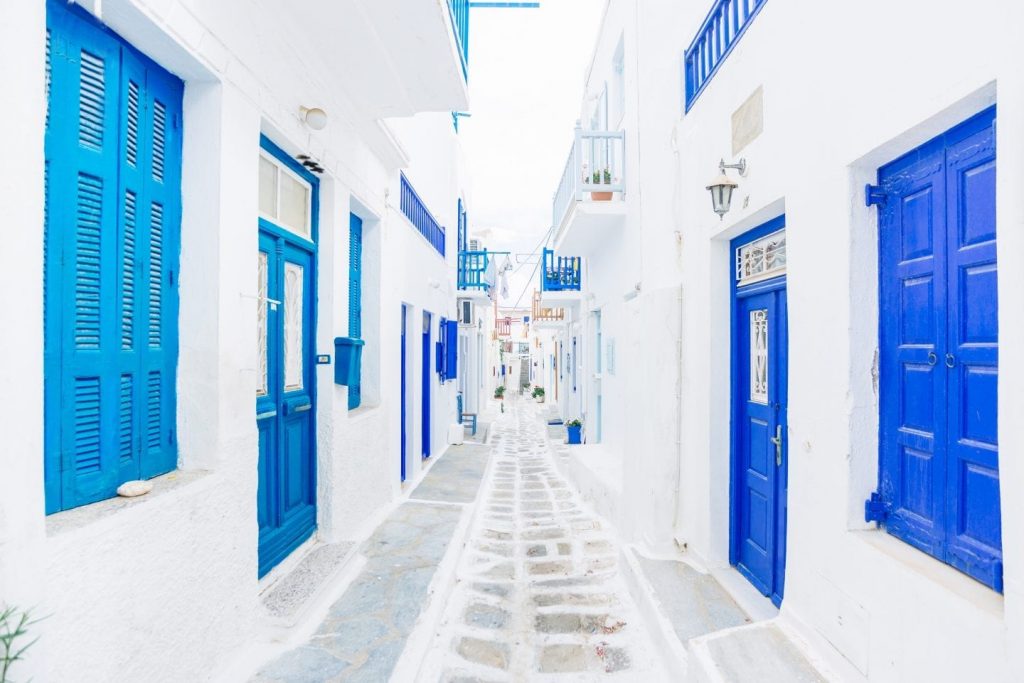 Things to do in Mykonos

Explore the beaches of Mykonos 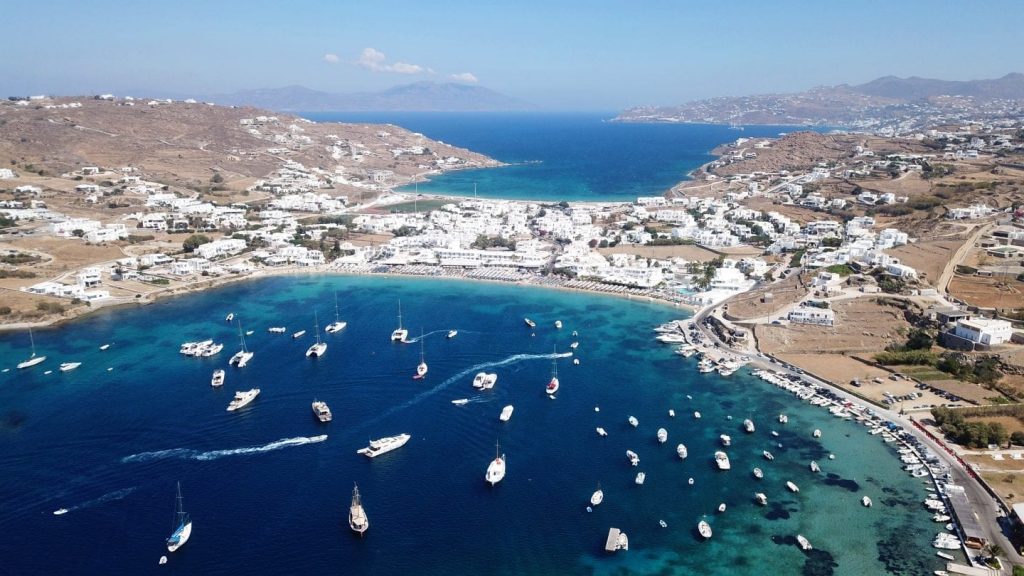 No trip to Mykonos would be complete without taking the time to explore the many beaches and resorts that line the coast of this Greek island.

With over two dozen Mykonos beaches to choose from, travelers will be able to find the perfect location whether you seek remote seclusion, accessible family fun or romantic luxury spots.

Sunbathing on the coast of an island paradise with a specialty cocktail in hand is on the list for many travelers, making this one of the top things to do in Mykonos.

Venture into the crystal clear waters of Mykonos

Given the idyllic ocean waters that surround this small Greek island, it’s no surprise that water sports and recreation rank high on the list of things to do in Mykonos.

Snorkeling and diving are by far the most popular with almost every beach resort and hotel offering tours and lessons at a beach nearby. Offering such adventures as night diving, shipwreck diving, beginner lessons and all-inclusive experiences, adventurers of any skill level can explore the waters surrounding the island of Mykonos.

For those less adventurous, you can also experience the waters of this island through sailing excursions, yacht rentals, party boats and sightseeing cruises along the southern coastline. For the extreme adventures seeking a chance to let loose on the turquoise waters of the island, there is also many opportunities to rent jet skis or try your hand at windsurfing.

Mykonos is filled with restaurants of all types and price-ranges, from luxurious fine dining experiences to quaint local tavernas.

Many of the restaurants are clustered around the beaches and resorts, offering exquisite Mediterranean fare alongside picturesque views of the ocean and coastline.

Fresh seafood tops the list at most locations, featuring traditional Greek dishes as well as modern fusion and international fare.

With small local eateries alongside boutique and fine-dining establishments, there is something to appeal to palates of any budget, making the culinary experience one of the most appealing of the things to do in Mykonos.

Explore the grounds of the Monastery of Panagia Touliani

Sightseeing is always at the top of any traveler’s plans, and Mykonos has no shortage of amazing sights to see.

One of the most popular things to do in Mykonos is a trip to the Monastery of Panagia Touliani.

This Greek Orthodox monastery was built in the 1500s and restored in the 1700s, displaying classical Greek architecture and the classic opulent style of Greek Orthodox churches.

The whitewashed exterior is topped by a colorful dome, with marble fountains and colorful decor inside, including ornate silver hanging incense burners, a lavish wooden altar screen created by a Florentine artist in 1775 as well as many other treasures and artifacts in their small ecclesiastical museum located on site.

It is suggested that you call ahead to book an appointment to view the monastery, but it is well worth the trek to see this amazing site.

Marvel at the ruins of Gyzi Castle

Located in roughly the center of the island, Gyzi Castle is an ancient ruin dating back to the 13th century. Built by the Venetian Gyzi family, the rulers of the island and other surrounding islands during that time period.

This explains the rather medieval feel to the structure, standing in stark contrast to the typical Greek architecture found elsewhere. This site is free to the public and well worth the trip, allowing visitors to explore the remnants of the castle as well as other archaeological sites including the old cemetery, an ancient market and the fortification wall that is older than the castle ruins themselves, built to defend the area from pirates and attack from enemies.

Also on the site, a quaint white-washed chapel built around the 18th century stands alongside the ancient ruins, set against a backdrop of sweeping views of almost the entire island and the surrounding oceans.

For this reason, a visit to this site is one of the top things to do in Mykonos, even if you aren’t visiting for the historic site.

Wander the streets of Little Venice 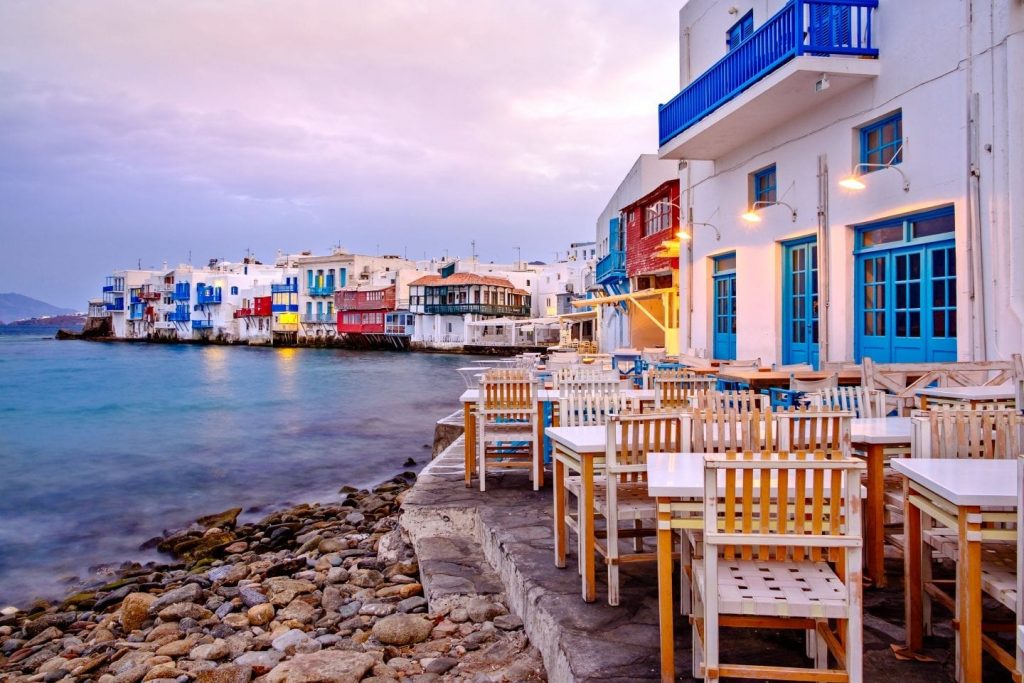 This iconic neighborhood got its nickname from the colorful buildings perched precariously right on the edge of the sea, reminiscent of the structures around the famed Venetian canals.

Originally built by sailors and merchants, the buildings that cling to the edge of the sea have now mostly been turned into chic little bars and small eateries.

The area has also been a hotspot for renowned artists from all over the world and some claim it to the be among the most photographed places in Europe for its unique attributes and style.

The pace is slower in this neighborhood, reminiscent its origin as a fishing village. Taking time to wind down and share a romantic dinner for two while watching the sun set over the town of Little Venice is often a must on a traveler’s list of things to do in Mykonos.

Surround yourself with history on Delos Island

This small and rocky islet is one of the islands near Mykonos, famed for its incredibly ancient panHellenic ruins, statues and temples, many of which can be explored today.

This small island was first used as a religious sanctuary around 3000 B.C. and was later dedicated by early Greeks to their god, Apollo.

Today the island is accessed via a ferry and filled with ruins of every kind, including stadiums, temples, sanctuaries and multiple statues spanning many different time periods in the island’s history.

A small museum helps further explain the ancient history of the area, making a stop at Delos Island one of the top things to do in Mykonos for anyone who wants to immerse themselves in the rich and vibrant history of Greece.

Enjoy the views from Panagia Paraportiani

This remarkable church sits atop a hill overlooking the main city and the ocean, stark white against the blue backdrop of the sea.

The surprising architectural features of this place are explained by the fact that it is not one single church but actually five different churches all built one atop the other over the course of centuries!

The first church was built in the 14th century and other churches were built alongside it or even on top of it in the centuries that followed, making a stop at this location one of the most unique of the things to do in Mykonos.

Admire the quintessential windmills of Mykonos 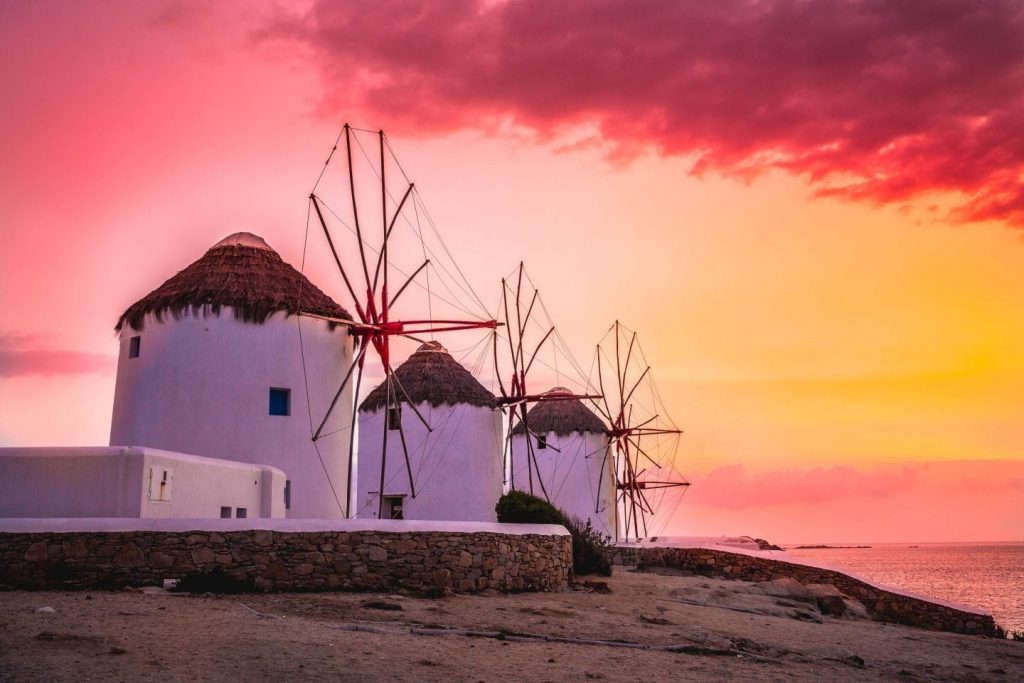 Surrounding the shoreline around Mykonos town are the quaint spherical windmills that are one of the most well-known features on the islands.

Dating back hundreds of years, the windmills were originally used to grind wheat and oats. Most have been renovated and are no longer operational, but you can explore the interior of one that has been turned into a museum explaining the history of these unique structures.

Given how synonymous they area with the island of Mykonos, the windmills are a must-visit when planning your list of things to do in Mykonos.

Experience the beauty of Matogianni Street

Matogianni Street and other nearby streets are a must for any visitor to Mykonos.

Pristine white walls, quaint shops and storefronts, flowering trees and plants in the spring, luxury boutiques and high-end shopping all converge to create an experience unlike any other! Cafes and restaurants can be found, as well as views of the harbor and surrounding city.

Often considered one of the most photographed streetscapes in all of the Mediterranean, a visit to Matogianni Street ranks high on the list of things to do in Mykonos. 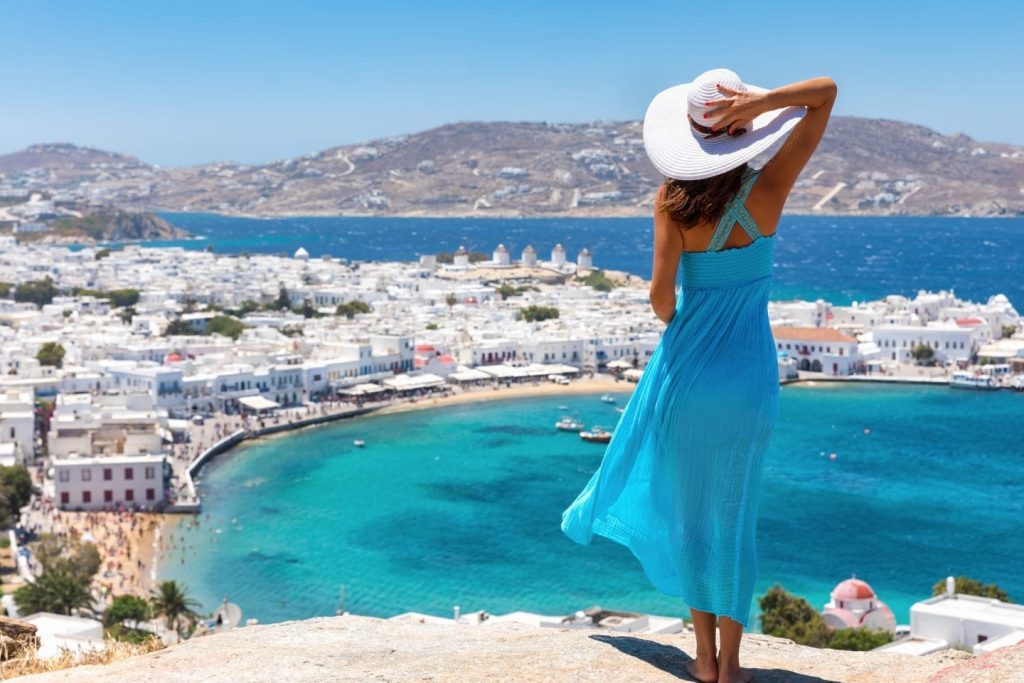 Despite being well-known as a party-goers island, Mykonos has so much more than that to offer.

From ancient Greek relics and ruins to luxury resorts on pristine beaches, there is a wealth of options when it comes to exciting things to do in Mykonos. No matter what your interests may be, you will be sure to find something that will appeal to you on your next adventure to the Greek island paradise of Mykonos. 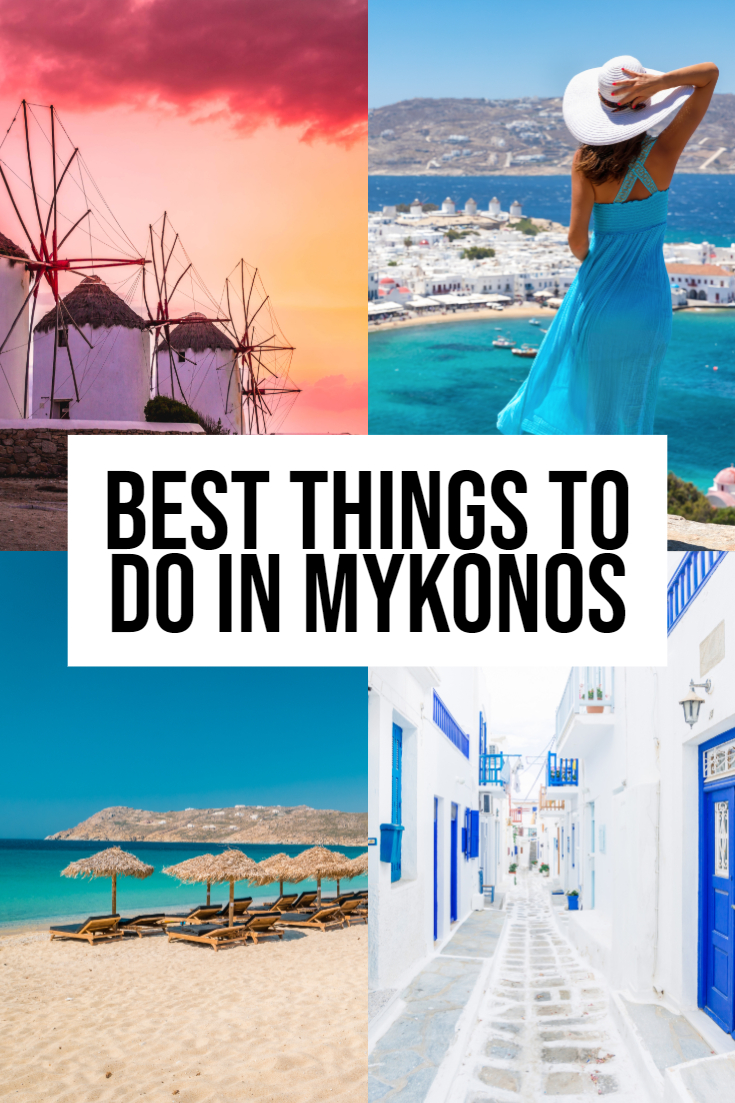