When it comes to Old World, Eastern European countries, you will find endless attractions, warm hospitality, and a fascinating culture amid nine beautiful cities in Germany.

Complete with enticing architecture, culinary delights, and unique museums, the options to explore these nine beautiful cities in Germany will be worthwhile on your own adventure and a must on your European bucket list.

Visiting these nine cities was part of a Viking River Cruise the Grand European Tour. 15 days along the Danube and Rhine Rivers, exploring cities, castles and palaces alike.

All of the eight stops in Germany are listed below with some information on each one. 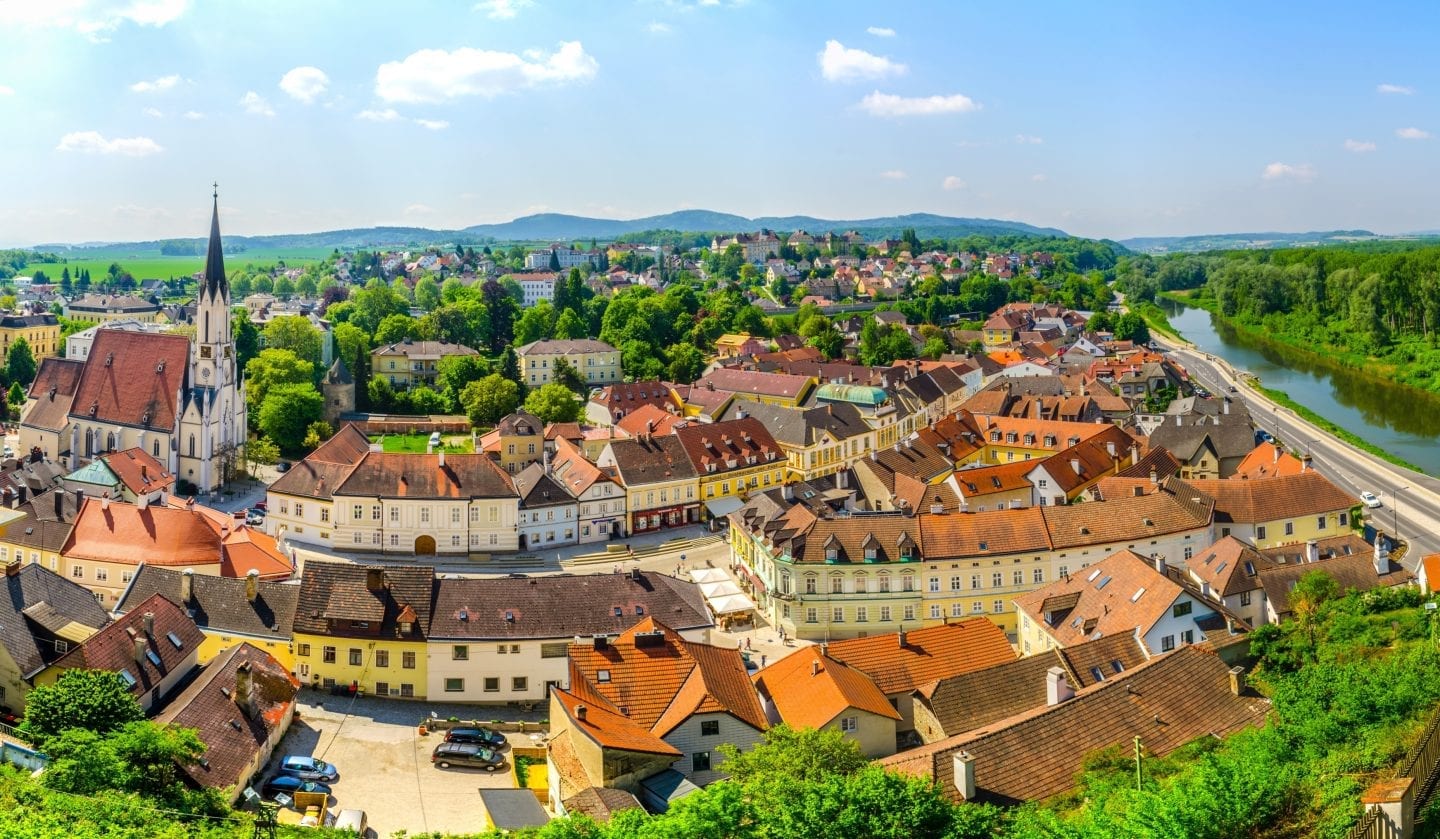 A German city full of charm and exceptional sightseeing, you’ll be entranced at the views of homes, shops, and buildings in Passau.

Picturesque Passau is often encapsulated in photographs along a major waterway, because the city is nestled at the confluence of the Danube, Inn, and Ilz rivers. Because of its location, Passau is known as The City of Three Rivers.

Catholicism is ubiquitous in Passau, and the St. Stephan’s Cathedral is the epicenter of faith and history among the beautiful cities in Germany. Constructed in the 1600s, the Baroque revival architecture is reflected in the design of the majestic compound, with its impressive height and robust organ echoing the sounds of traditional music throughout the building.

Your reward for trekking up the mountainside includes remarkable city views unlike any other. You can reach Veste Oberhaus by city bus, a steep walk, or car as parking is available just behind the castle.

The landscape of Passau is full of bright colored buildings, established architecture, and rolling green hills in the distance. You’ll be hard pressed not to spot the many boats and ships of all sizes navigating the waters in and around Passau. 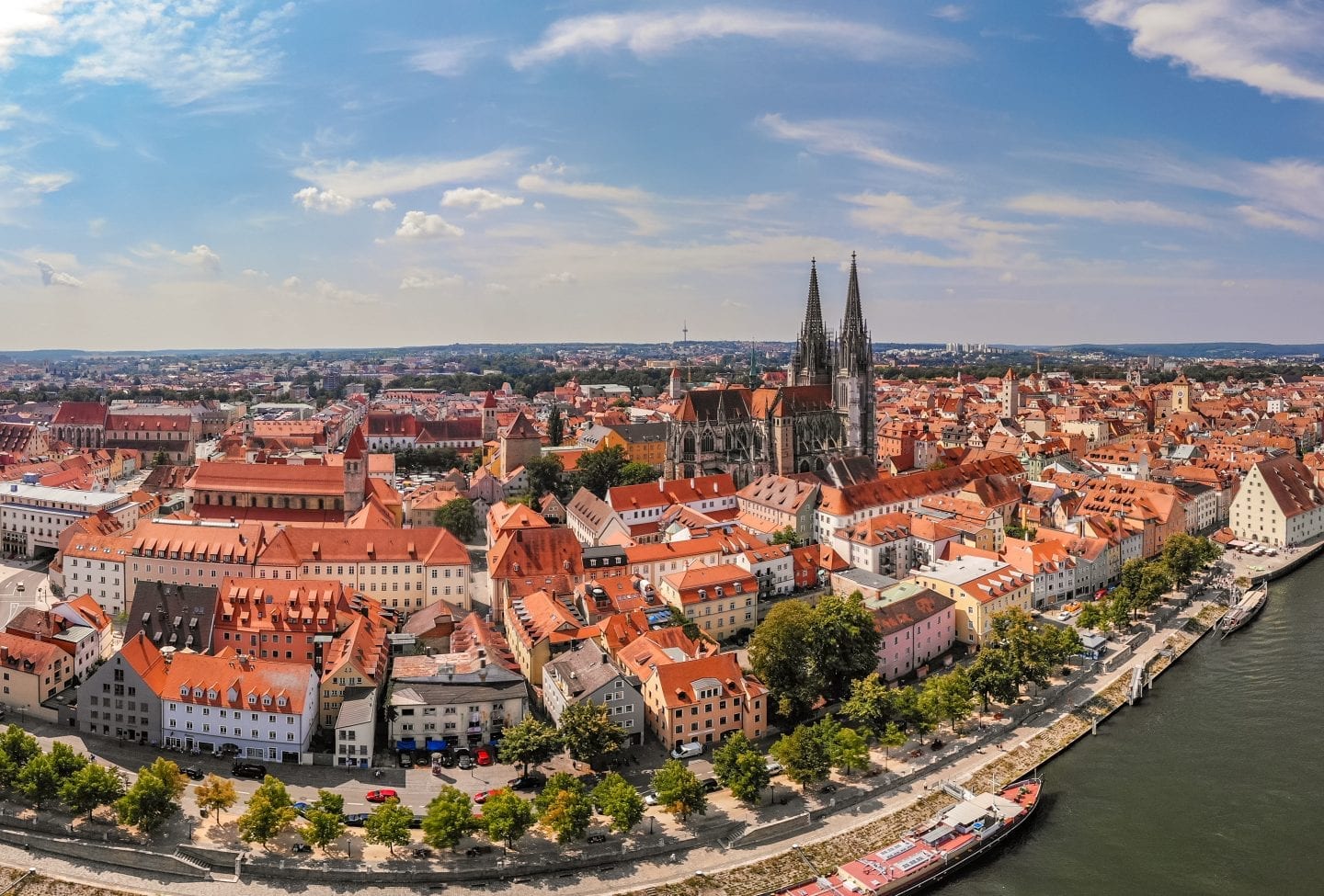 If medieval architecture is up your alley, you won’t be disappointed in Regensburg. When it comes to beautiful cities in Germany, Regensburg is stacked with castles, churches, monuments, and relics that exude medieval history.

For a distinct historic figure in Regensburg, you won’t venture far to find Old Stone Bridge. Just as the name indicates, this 12th century bridge connects Stadtamhof and Old Town across the Danube River. The city is incredibly proud of this landmark, and you can even rent a bike nearby to ride over the bridge!

Seeking magnificent panoramic photographs of the Danube River and beyond? Look no further than Walhalla, the Parthenon monument built in Greek Revival architecture. Hike up a few flights of stairs and you’ll be rewarded with sprawling views.

There are many replicated busts featuring leaders in German history at this “hall of fame” collection of revered figures. Even if you don’t pay to enter the hall, you’ll find many visit Walhalla to take in the stunning views.

Featuring traditional Gothic architecture is St. Peter Cathedral, arguably the most popular landmark in Regensburg. The massive cathedral is filled with all kinds of passageways, stained glass, arches, statues, and more.

This landmark is a great place to escape the hot summer sun in warm months, wandering through its massive interior and exhibits, although if you find yourself visiting in winter, the city of Regensburg is alive during Christmastime, filled with festive lights. 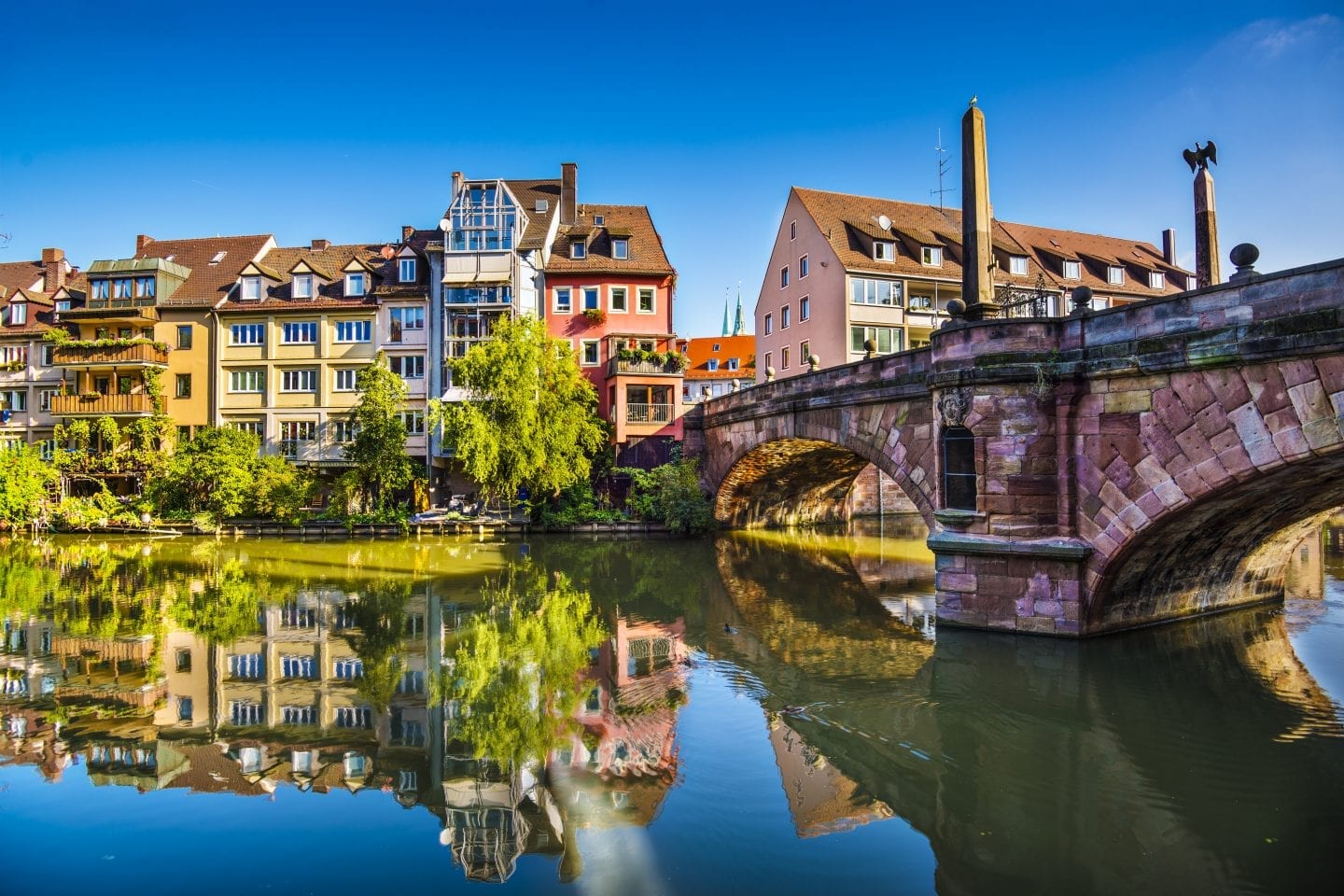 While this locale may be somewhat mired in dark history during Hitler’s regime, it remains one of the most charming among the beautiful cities in Germany.

Take a step back in time to Hitler’s Nazi Party Rally Grounds. You’ll feel chills instantly when you see the stage where the leader evangelized thousands with his speeches.

Audio guides are available in English, enabling you to learn about the propaganda, nationalism, and demagogues that rose during World War II, bringing together masses of people.

The massive Imperial Castle of Nuremburg is a top attraction, attracting crowds daily. Beyond expansive views of the city from the hilltop, you’ll be entranced by the stone walls, many rooms, and majestic feeling of the historic castle.

There is significant history, especially military arms, and a spacious garden as well. With so many steps to take, this is prime sightseeing and exercise, and you can easily spend an entire day here.

Nuremburg is also revered for its markets. During Christmastime, you’ll find homemade gingerbread and children’s toys, among other seasonal treats, available to locals and tourists. The city is famed for its red roof buildings and incredibly detailed architecture. 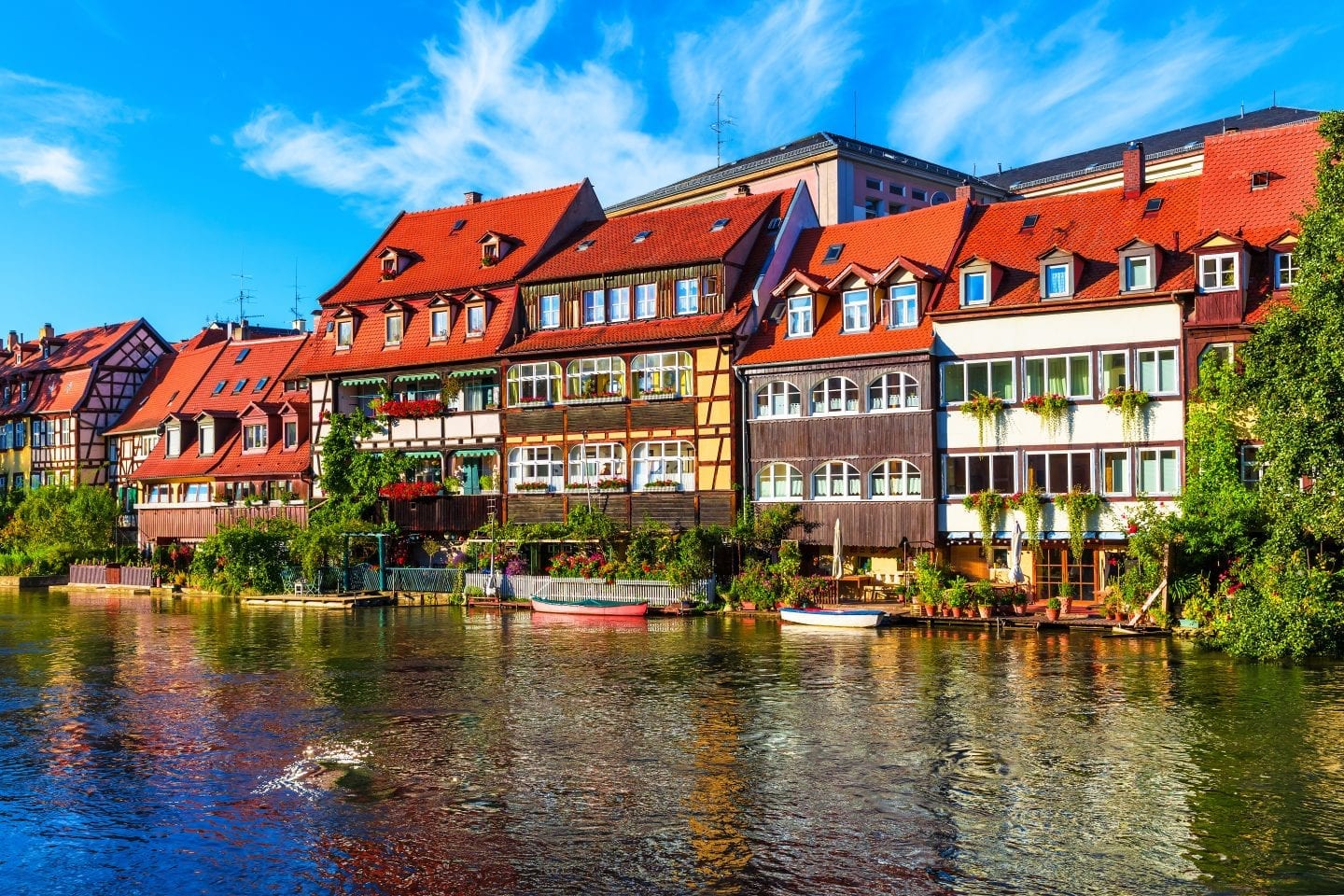 In Northern Bavaria, you’ll find a smaller town with traditional castles, churches, museums, and more. The town of Bamberg may not be the largest among the beautiful cities in Germany, but you’ll find the Old World charm and hospitable feel all the worthwhile.

Art seekers will revel in the collections found at the Historical Museum of Bamberg, where you’ll also learn about the culture and town’s pride. One of the most famous fixtures of Bamberg is the Town Hall, or Altes Rathaus, with important statues and incredible attention to detail throughout.

Bamberg Cathedral features classic Roman Orthodox and Gothic style architecture and is a UNESCO World Heritage site, with its stately appearance and interior. Even though the cathedral is over 1,000 years old, there remain active services today.

A final fixture in Bamberg is the Atlenburg Castle, with its incredible views over the entire town since being constructed in 1109. This Medieval castle has been well maintained, and the surrounding nature scene is worth a visit. 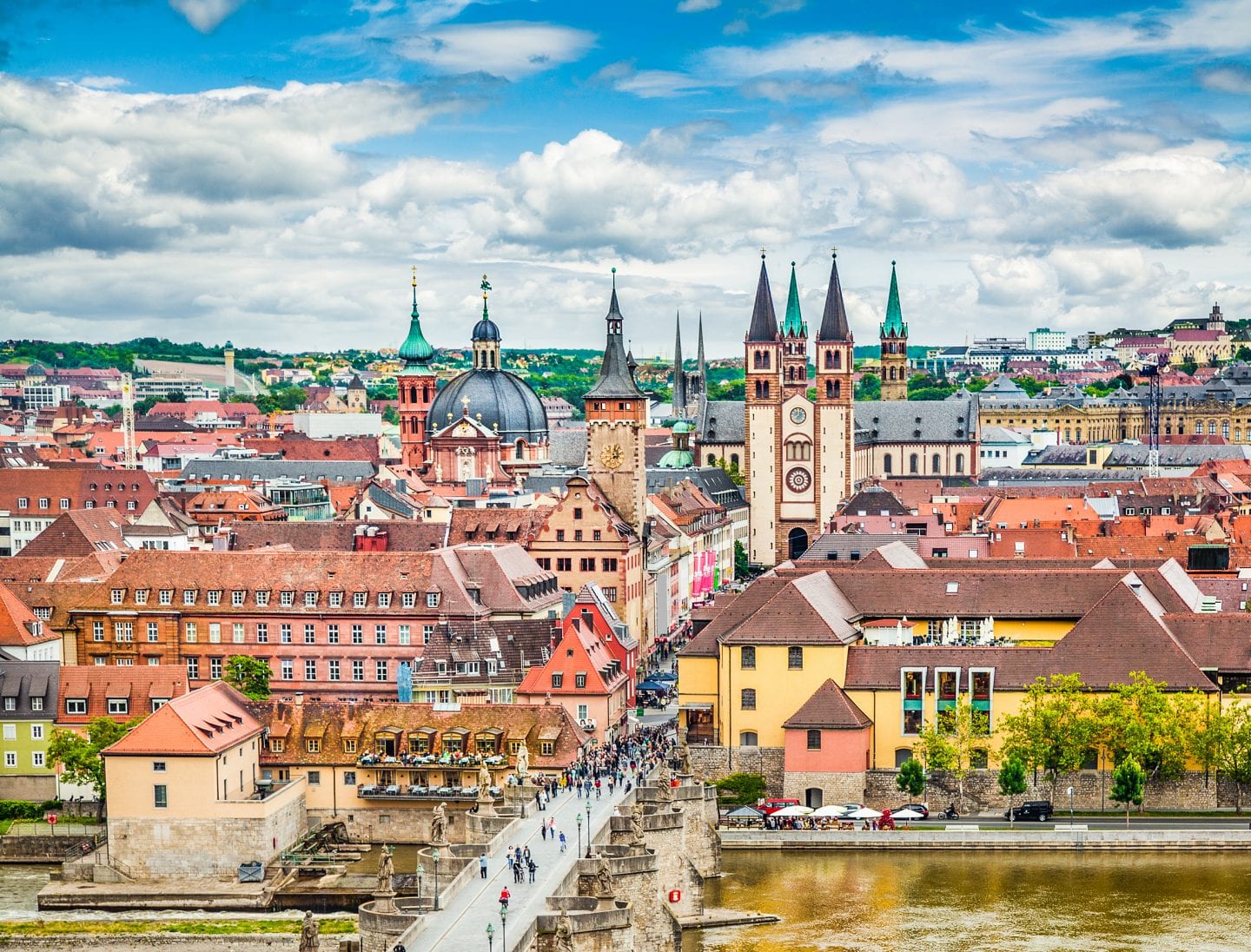 The whimsical rolling hills of Würzburg are apparent to all who visit, and the climate of this city makes it ideally situated for producing fine German wines. Another one of the beautiful cities in Germany located in Bavaria, the architecture here varies from traditional Gothic to predominately baroque and rococo style.

If grandeur and opulence are what you scour the world in search of, look no further than the Würzburg Residence. The massive palace is filled with history of the families who occupied the palace.

Visitors remark that the size, detail, architecture, and exhibits truly rival those of Versailles in Paris. It is another UNESCO World Heritage site. Don’t miss the highly discernible features, including the sprawling staircase and remarkable ceiling.

Other must-see destinations in Würzburg include the Marienberg Fortress, a restored castle with many historical exhibits, and Old Main Bridge, another classic bridge with incredibly detailed statues and stonework. 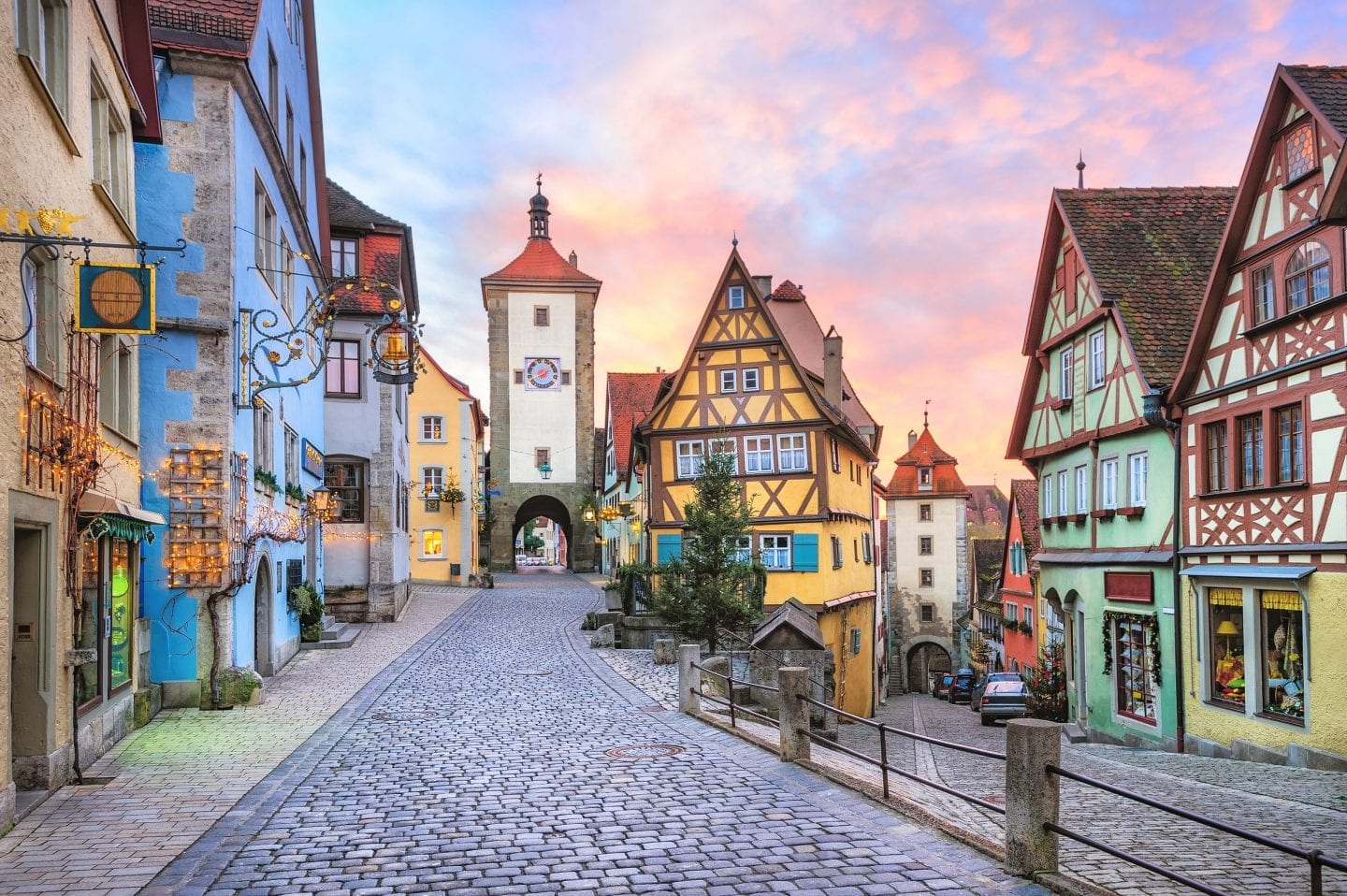 If you find your way along the popular Romantic Road of Southern Germany, a stop in Rothenburg is a must-see. The intricate, distinctive design of the colorful homes and buildings is mesmerizing, and the cobblestone streets, clock towers, and green trees add to the Middle Age charm in this quaint German town.

When it comes to beautiful cities in Germany, Rothenburg offers sightseeing and attractions to entertain every visitor.

For the most incredible views, take a walk along the City Wall. The scenery is incredible, and the rich history is maintained through families who have sponsored plaques to remember those lost during World War II.
The Wall was restored after bombings during the war, and the rebuilding effort is incredible. If you care to support Rothenburg’s continued restoration, you can sponsor a plaque for approximately $1500, maintaining the history of this special town.
Even if you don’t visit the beautiful cities in Germany during winter, you can enjoy Christmastime in Rothenburg year-round. Take a visit to the German Christmas Museum and you’ll be entranced by collections of ornaments, decor, and the history and traditions of Christmas.
The museum is easily completed within an hour, but the shop that follows will have you ensuring you save room in your luggage to take home a traditional Christmas souvenir from Rothenburg!
Rothenburg is truly a fairytale town; in fact, it is said that Walt Disney was inspired by Rothenburg when he created Pinocchio! You won’t regret visiting this incredible destination. 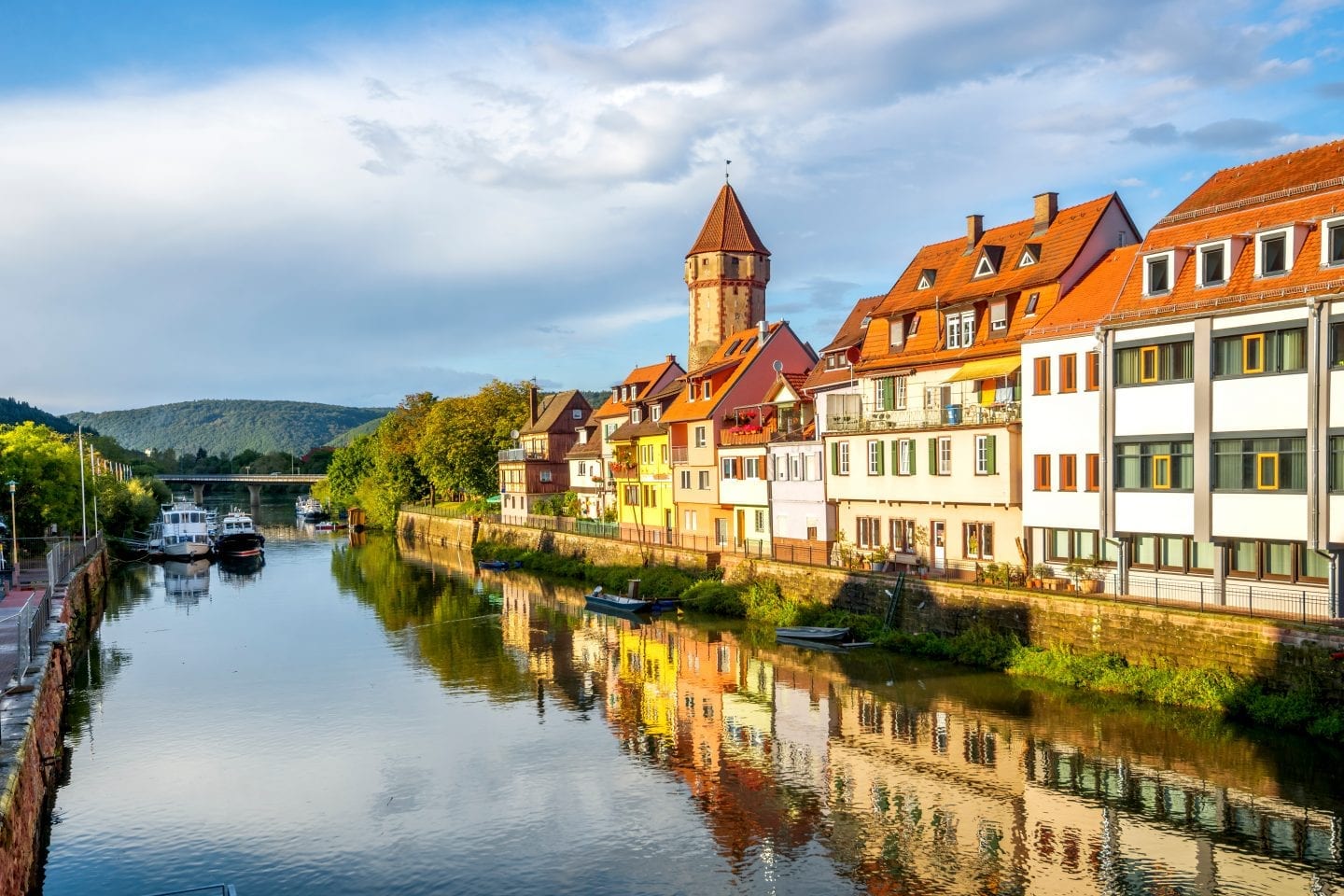 A smaller town among the more bustling, beautiful cities in Germany, life is calmer in Wertheim, and while you’ll find some attractions for tourists, simply exploring the shops, town center, and quiet town life will be worthwhile.

Tauber is a historic castle, set against the rivers and trees, dating back to the Middle Ages. The Wertheim Castle is stately and grand, absolutely worth exploring its massive interiors and stately grounds. Kloster Brannbach is a remarkable church and monastery founded in 1151, with audio tours available in English.

A chateau from the Middle Ages, the Castle Park Gamburg is another destination worth exploring in Wertheim. 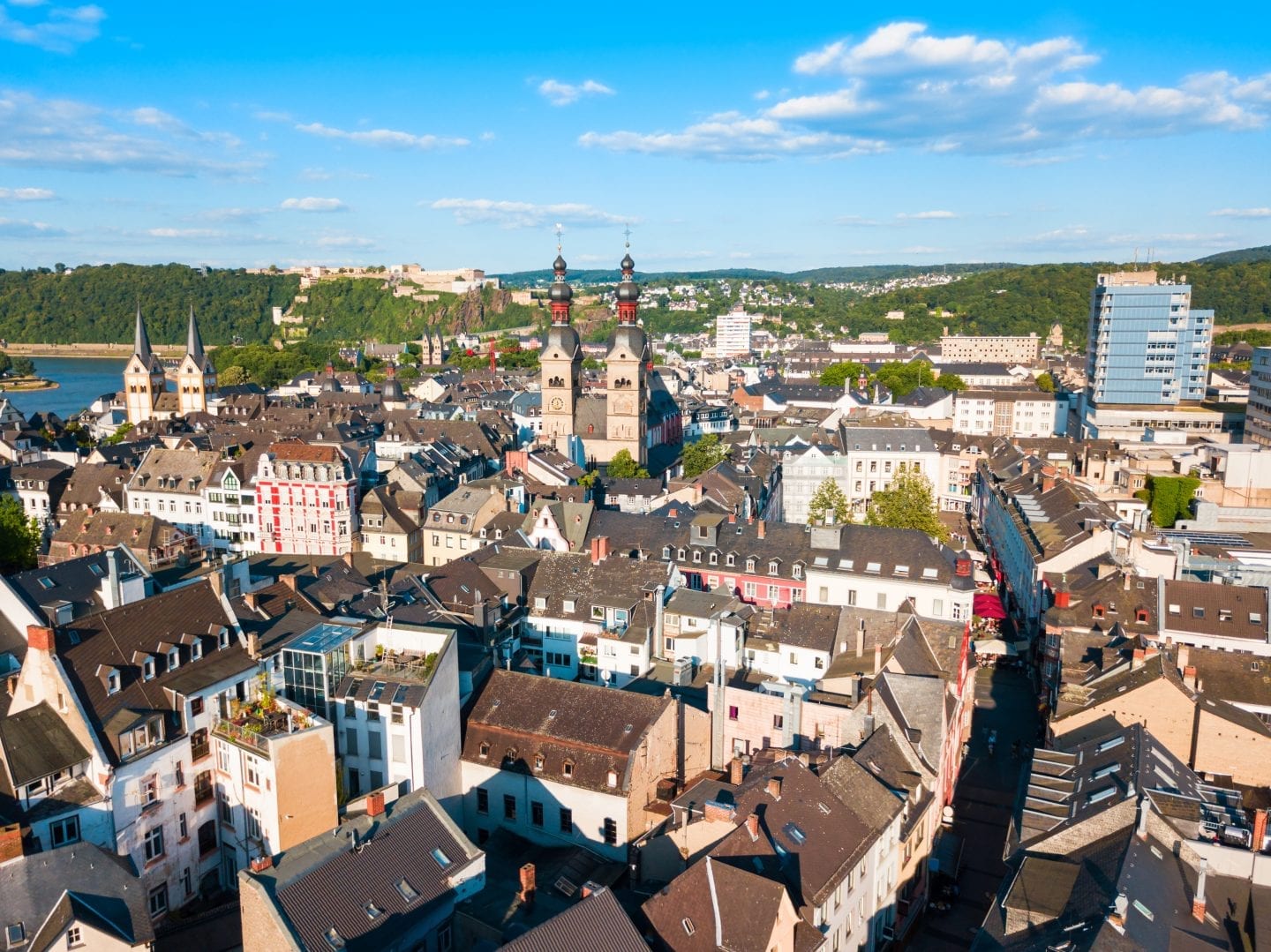 The Mosel and Rhine rivers converge at Deutches Eck, which is marked by a celebratory statue of William I, the first German Emperor who is revered for his efforts in the unification of Germany I 1897. This is a popular landmark, and you’ll find street food tours, cycling, music, and other events at this central location.

Ehrenbreitstein Fortress is a massive castle with rich history and sprawling views of the city from above. Most visitors recommend at least half a day to spend touring the historical exhibits. You can even ride a unique cable car to your journey at the castle!

The Electoral Palace remains a top landmark in Koblenz, and is very well maintained among attractions in Germany. The gardens are in pristine condition, and set alongside the river, you’ll find it is a prime location for a tranquil retreat, or some incredible photographs 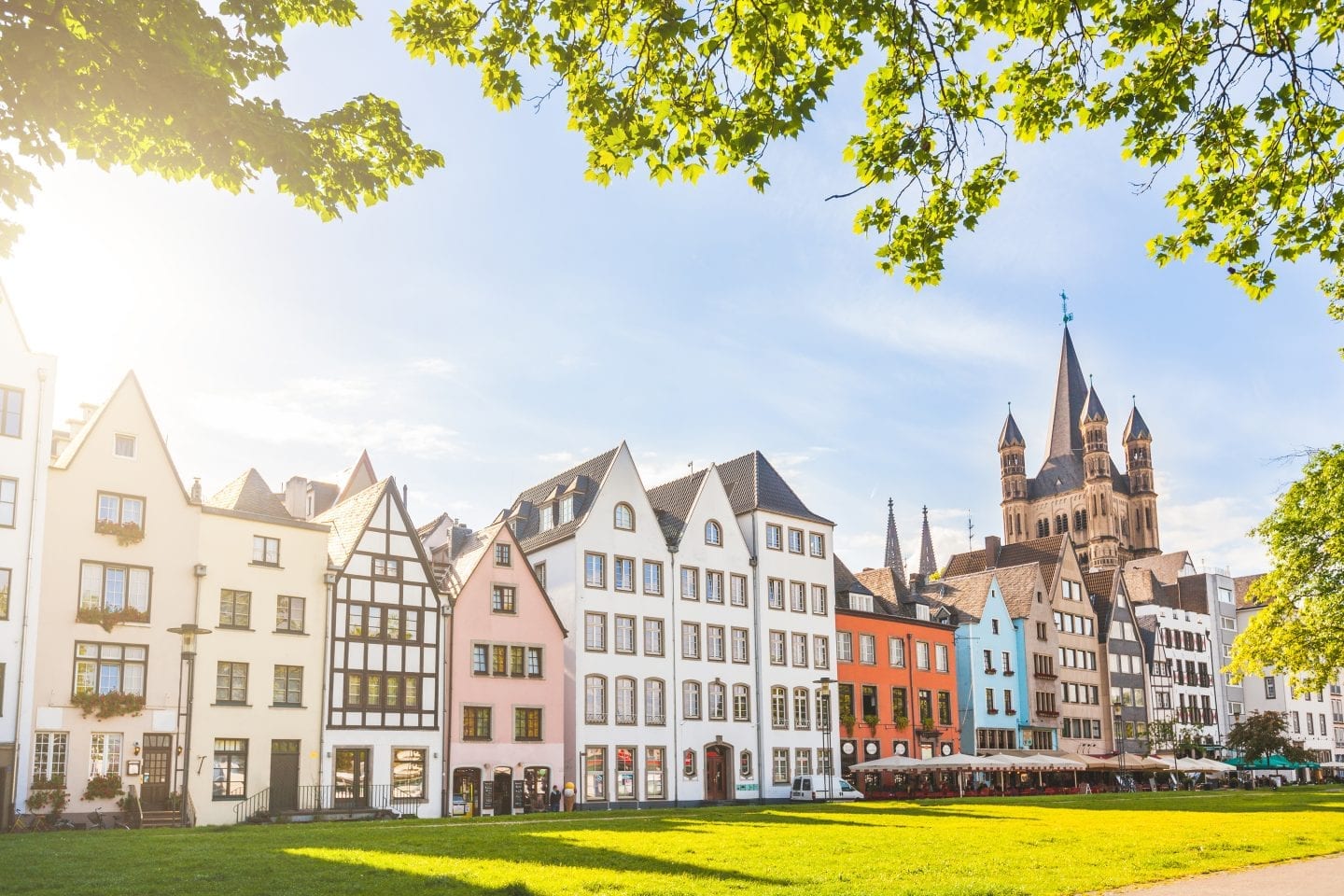 In this region of Germany, you’ll find Cologne is the epicenter of industry, culture, and urbanization. High Gothic architecture rules over this locale, and among the beautiful cities in Germany, you’ll feel reinvigorated by the lively nature of this bustling city.

Cologne is home to 12 Romanesque churches, but there are many highlights to the city if you aren’t seeking another historical church tour. The Cologne Chocolate Museum is dedicated to learning about the confectionery’s production and city’s pride in the delicacy.

The Museum Ludwig is a hall celebrating Picasso, Warhol, Lichtenstein, and other popular modern and contemporary art. And if you’re ready to let your adrenaline run wild in Cologne, visit Phantasialand, a popular amusement park that, while small, has incredible thrill rides to enjoy.

Add these eclectic venues to your tour list in Cologne, and it will mix up the days you’ve spent learning history and visiting Old World sights across the beautiful cities in Germany. 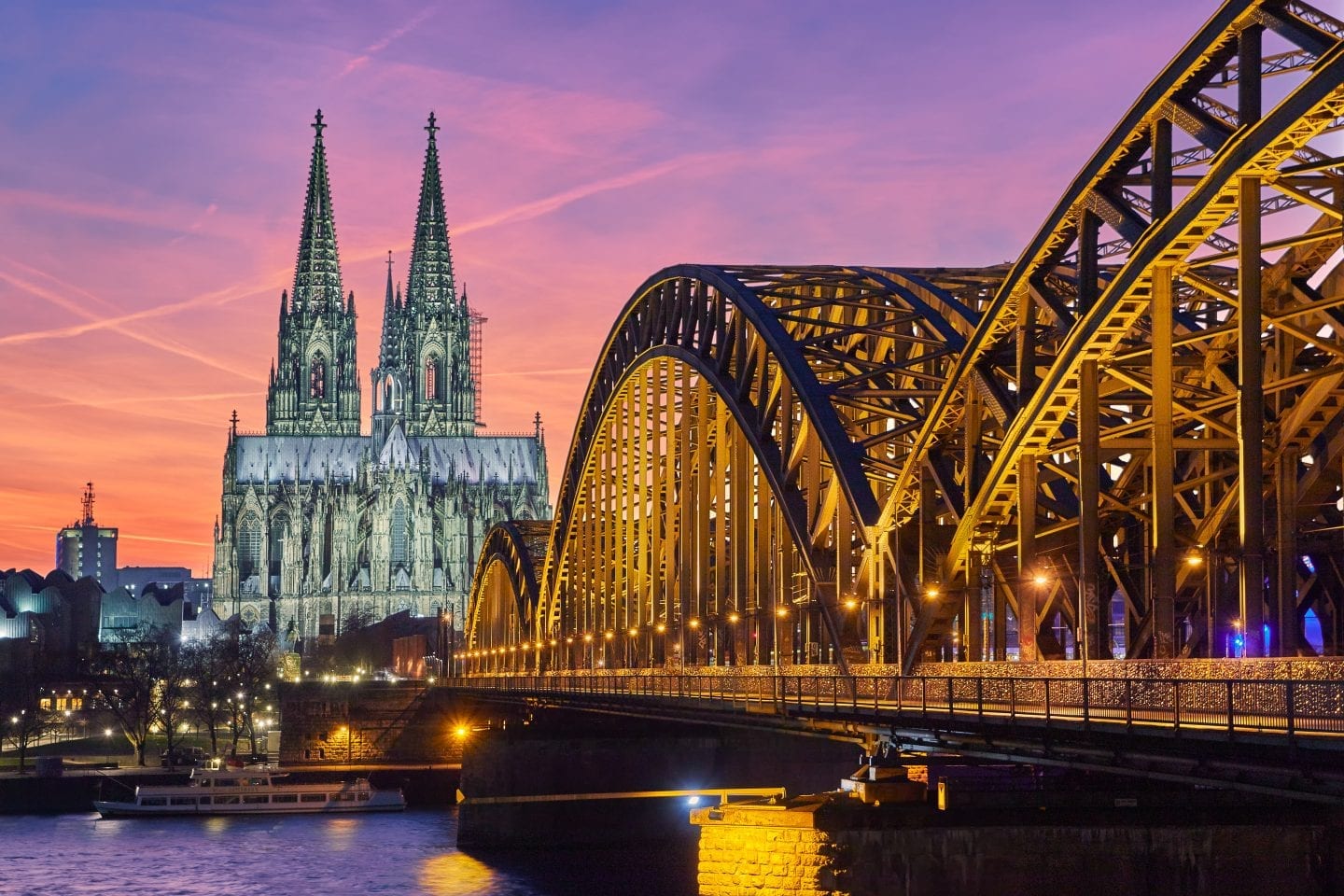 When you are deciding which Viking River Cruise to book, the Grand European Tour will allow you to see these gorgeous cities and to wander within the confines of Germany, you’ll find endless excitement, entertainment, and value in getting to know the beautiful cities of Germany.

This post will detail all you need to know when it comes to finding your way around Passau, the best of Regensburg, the history of Nuremburg, sights to see in Bamberg, what to do in Wurzburg, attractions in Wertheim, enjoying Koblenz and Rothenburg, and the best of Cologne. 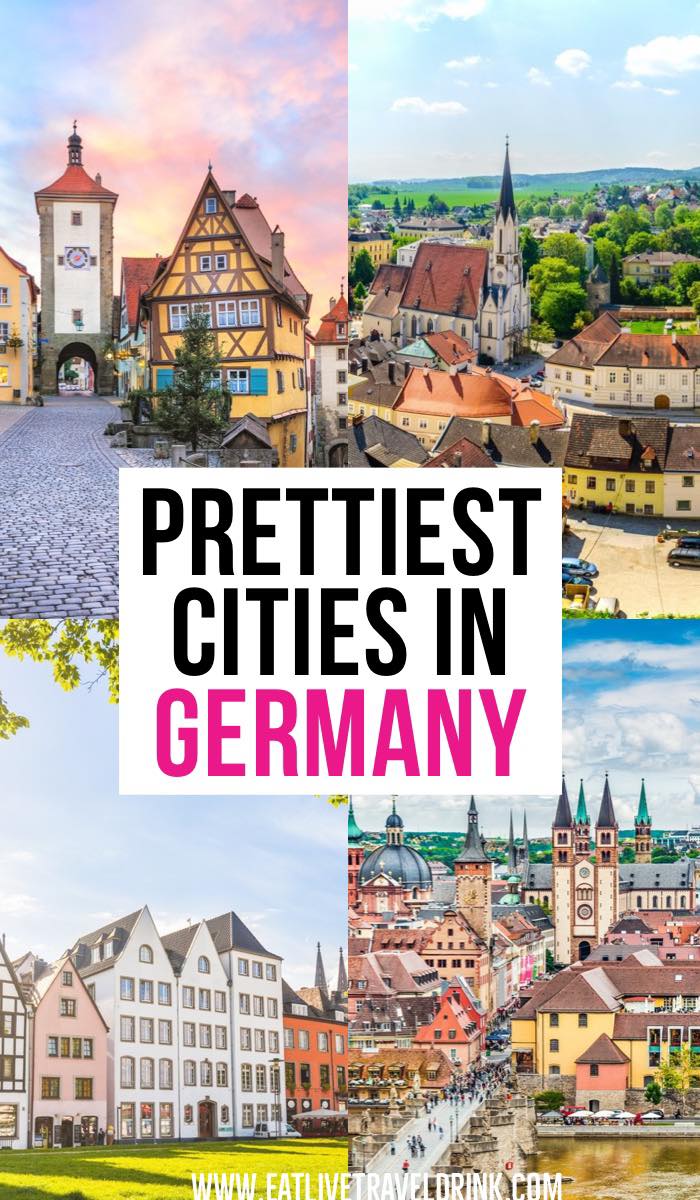 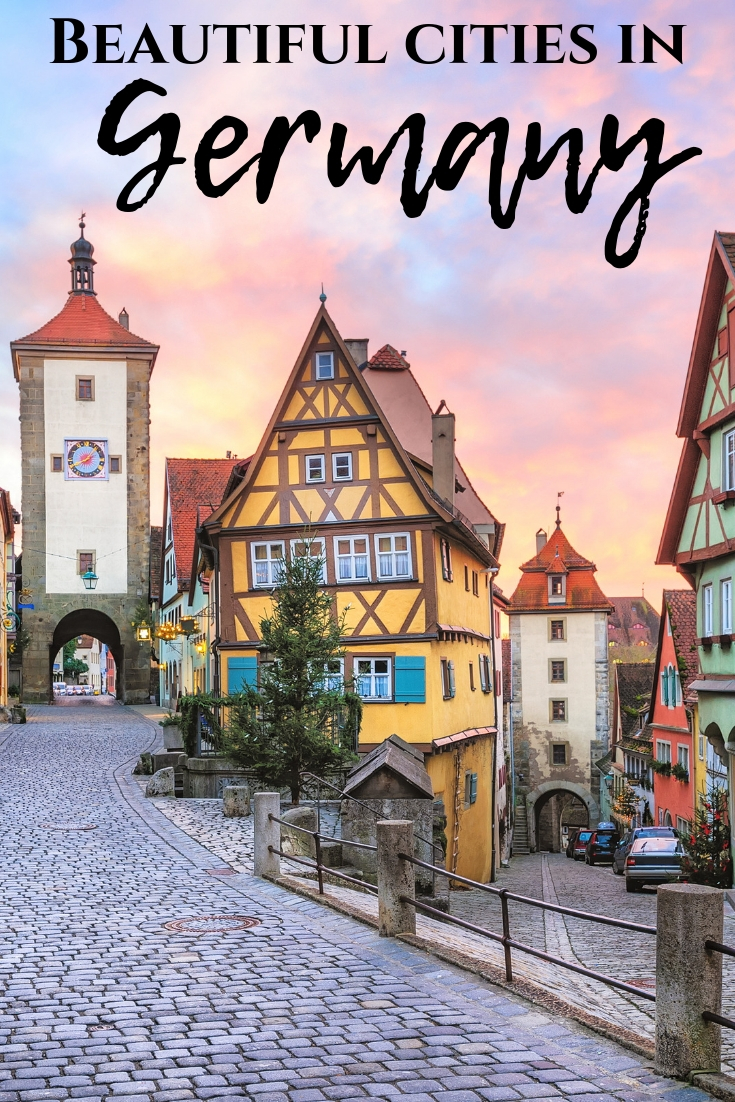 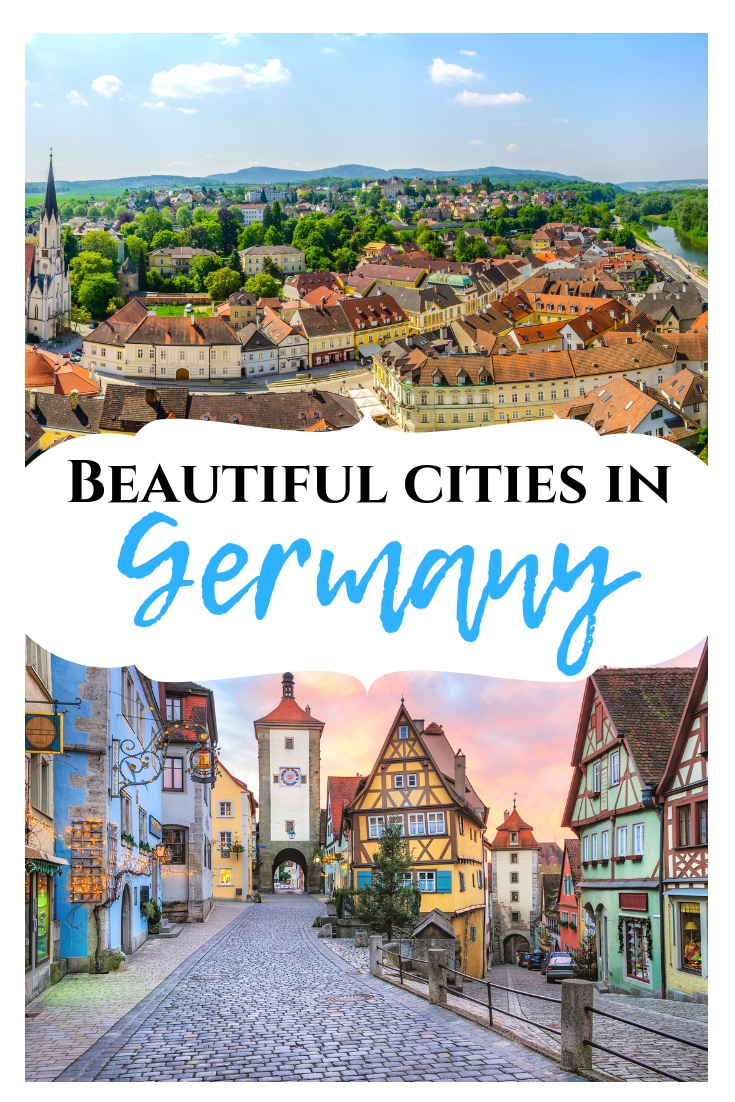 Disclaimer: I was a guest of Viking, but as always, opinions are entirely my own.