If you have a brief layover or are only spending just a small part of your journey across Europe in Hungary, you can accomplish quite a bit of intriguing sightseeing, rich history, and entertaining tourist activities in just 2 days in Budapest.

With dynamic battles and lives lost during the early Roman settlement of 1AD, the Ottoman Empire conquers, the Russian Empire, and both World Wars, there is rich history embedded in every era of Budapest’s story. Even if you only have 2 days in Budapest, you can find quite a few ways to take a trip back in time and explore the nuances of Hungary’s history, perhaps inspiring you to extend your trip or book a return.

How did Budapest get its name? Its origin is shrouded in many theories. One alludes to the root of the word, “Buda”, which may have been the name of the first constable of a fortress constructed on Castle Hill in the early 11th century. Another suggests Budapest was named during the Middle Ages after a man named Bleda, the brother of Attila the Hun, the ruling leader of the Hun Empire.

Budapest is actually the tenth largest city in the European Union and second fastest developing urban economy in Europe, according to Brookings Institution.

As the city is filled with many eclectic neighborhoods, cultural experiences, and hospitable people, you’ll find plenty of variety in activities, entertainment, and sightseeing during your visit, and if you are wondering if you can do Budapest with kids, the answer is YES!

2 Days In Budapest: Things To Do 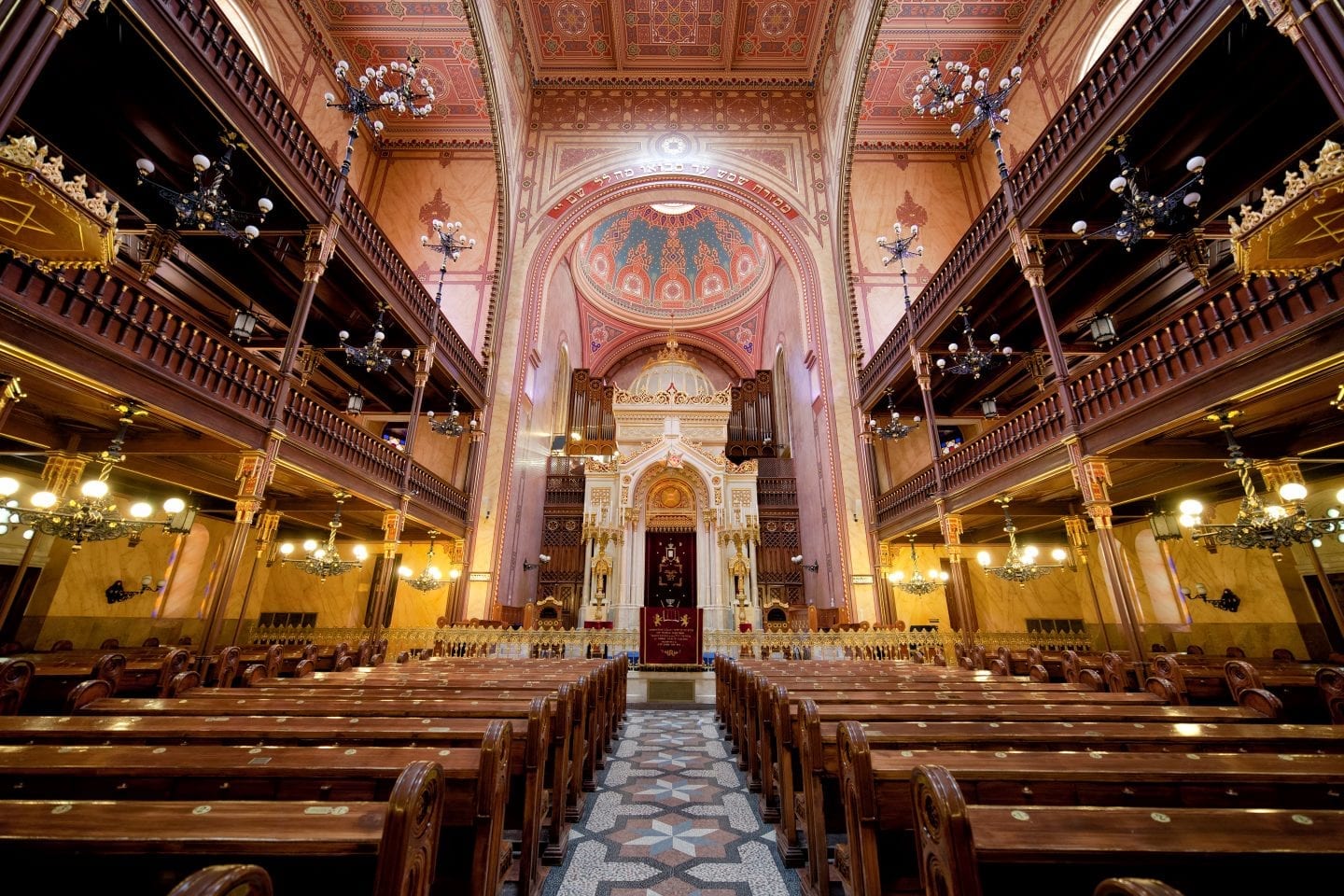 Visitors travel to Hungary from all across the world to see Europe’s largest synagogue, the second largest in the world. Seating over 3,000 people, the temple serves a population of Neolog Judaism, a reform sect of the practicing religion. The exterior was designed by Viennesse architect Ludwig Förster, designed to reflect the neutral forms of oriental groups that may be inspired by the Israelites, most notably the Arabs.

The Synagogue is also home to the Raoul Wallenberg Memorial Park, the Heroes’ Temple, and the graveyard. If you are so inclined, there is a specific Jewish Tour Hungary group that offers guided tours with tickets available for inclusive entrance to all venues. An interesting fact, the word “dohány” actually translates to “tobacco” in Hungarian. 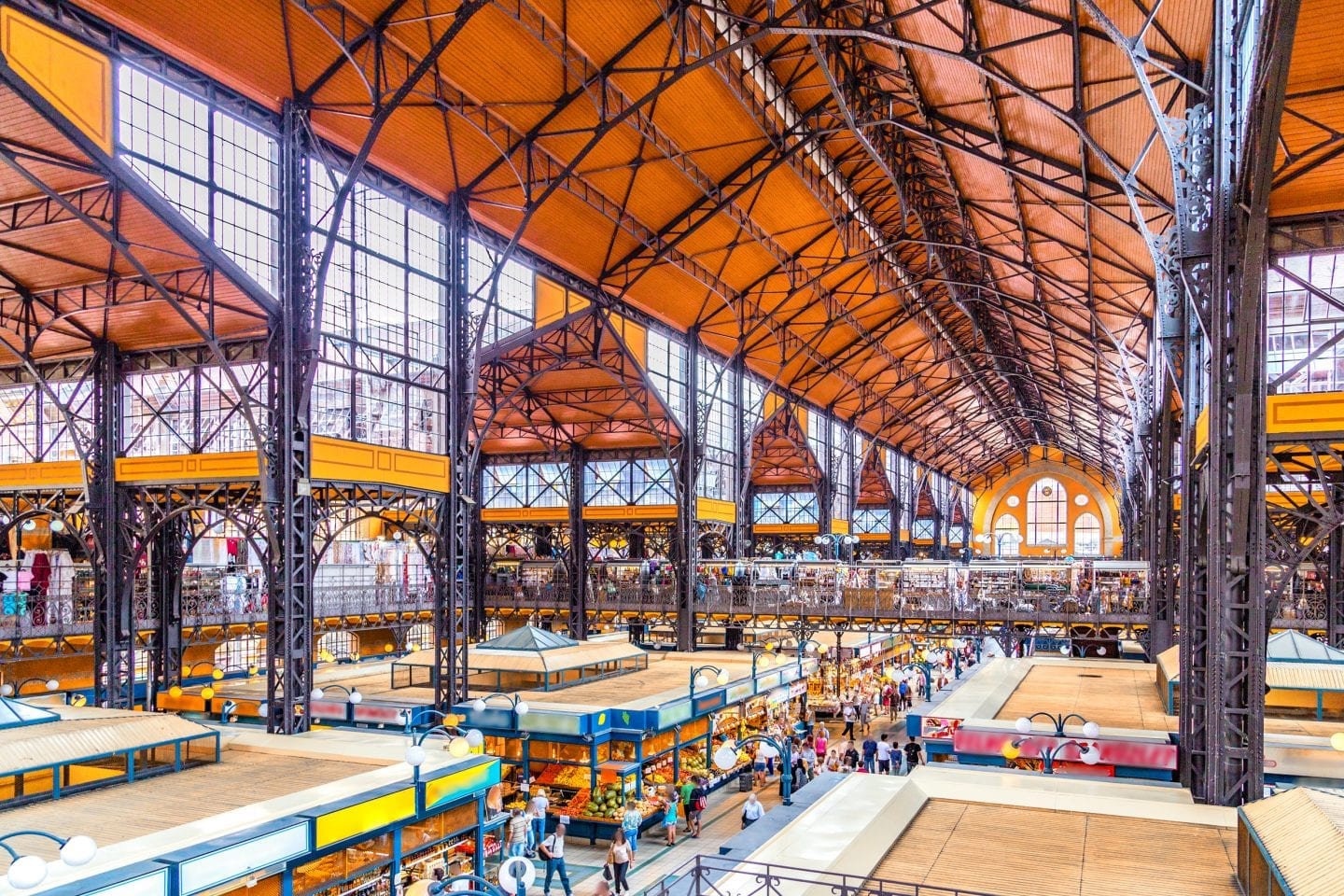 Also known as Central Market Hall, this expansive indoor market is home to a variety of stalls on three floors and was first constructed in 1897. While it was damaged and heavily distressed during World War II, the market underwent a comprehensive renovation in 1991 to fully restore its grandeur, reopening in 1997 and being awarded the FIABCI Prix d’Excellence award in 1999.

There are a variety of formal guided tours with tastings available, a great way to spend an afternoon, trying samples of local delicacies during your 2 days in Budapest. There are a variety of fruits and vegetables, fresh dairy products, cured meats, pickles, fresh fish, spices, local wines, and more. You’ll find local souvenirs, such as trinkets, bags, clothing, embroidery, cookware, and other takeaways. While there are additional markets in Budapest, this is one of the largest and is just five minutes from the city center of Budapest. A cornucopia of exploration is at your footsteps!

The Great Market Hall is open rain or shine, but it is closed on Sundays. It opens at 6am Monday – Saturday, closing at 3pm on Saturdays, 5pm on Mondays, and 6pm on Tuesday – Fridays. If you’re looking to avoid crowds, visiting mid-day on weekdays is best. 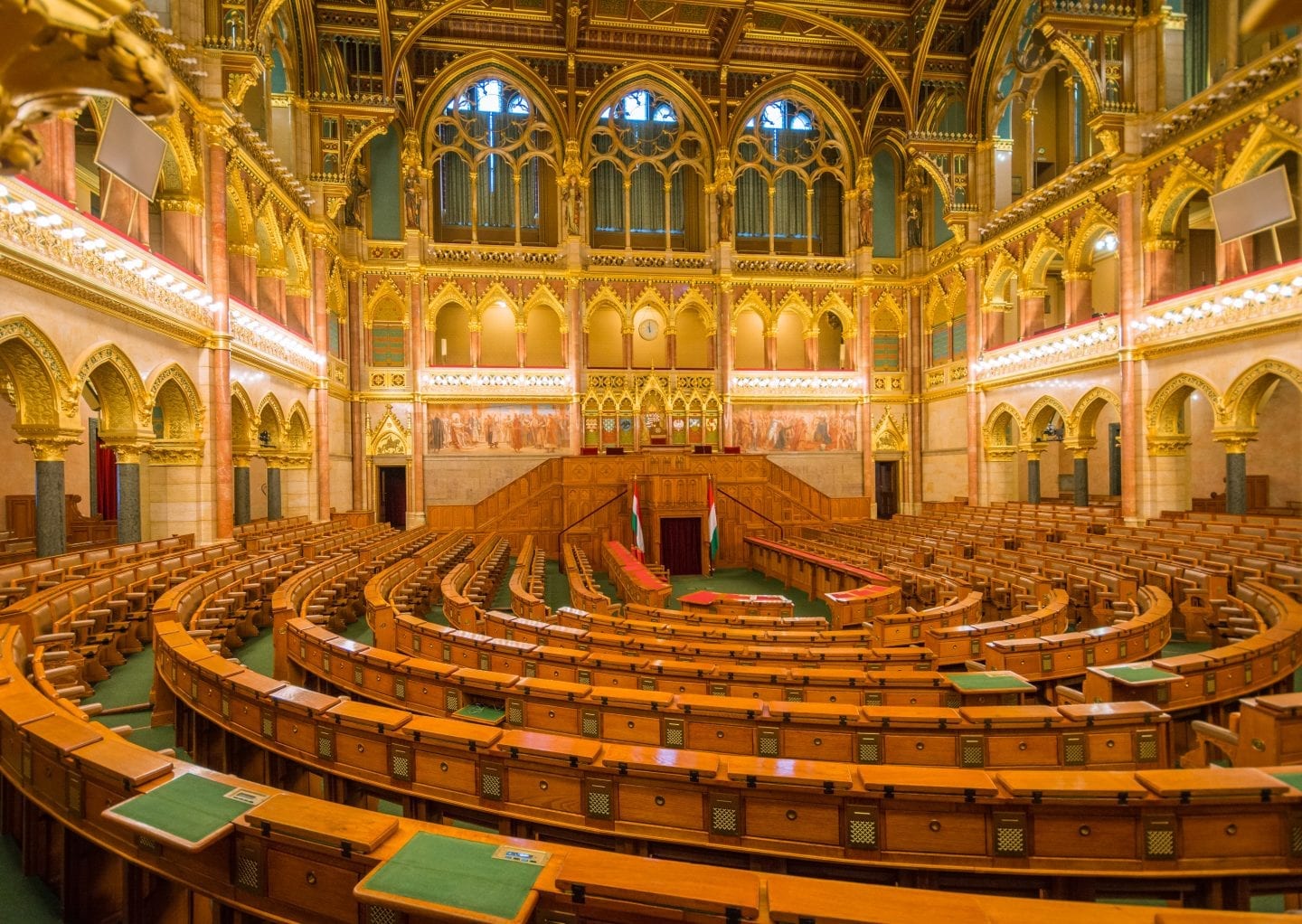 The National Assembly of Hungary, located in Lajos Kossuth Square on the bank of Danube, is the largest building in Hungary and tallest in all of Budapest. Designed in a Gothic Revival style, with a central dome depicted in Renaissance Revival. The façade is symmetrical, reflecting statues and figures of Hungarian and Transylvanian leaders, and military figures of Hungary’s history.

Visitors have the privilege of walking up ornamental stairs, gaze upon the majestic ceiling, and see impressive statues throughout the building. Stained glass and colorful mosaics depict more of the artistic attention to detail.

You can take a guided tour of the Parliament, as long as the National Assembly is not conducting session. Tours run roughly 45 minutes, where you’ll hear about the main entrance, stairways, halls, lobbies, House of Lords, and Hungarian Crown Jewels. You can purchase tickets in advance online, and this is an easy way to navigate long lines and the limited number of tickets available. The tour is offered in a variety of languages in each time slot, so do not wait to book as it often fills up.

Interested in ideal photo opportunities during your 2 days in Budapest? You’ll find some of the most picturesque views of the Parliament Building from across the Danube River, including from Batthyány Square. 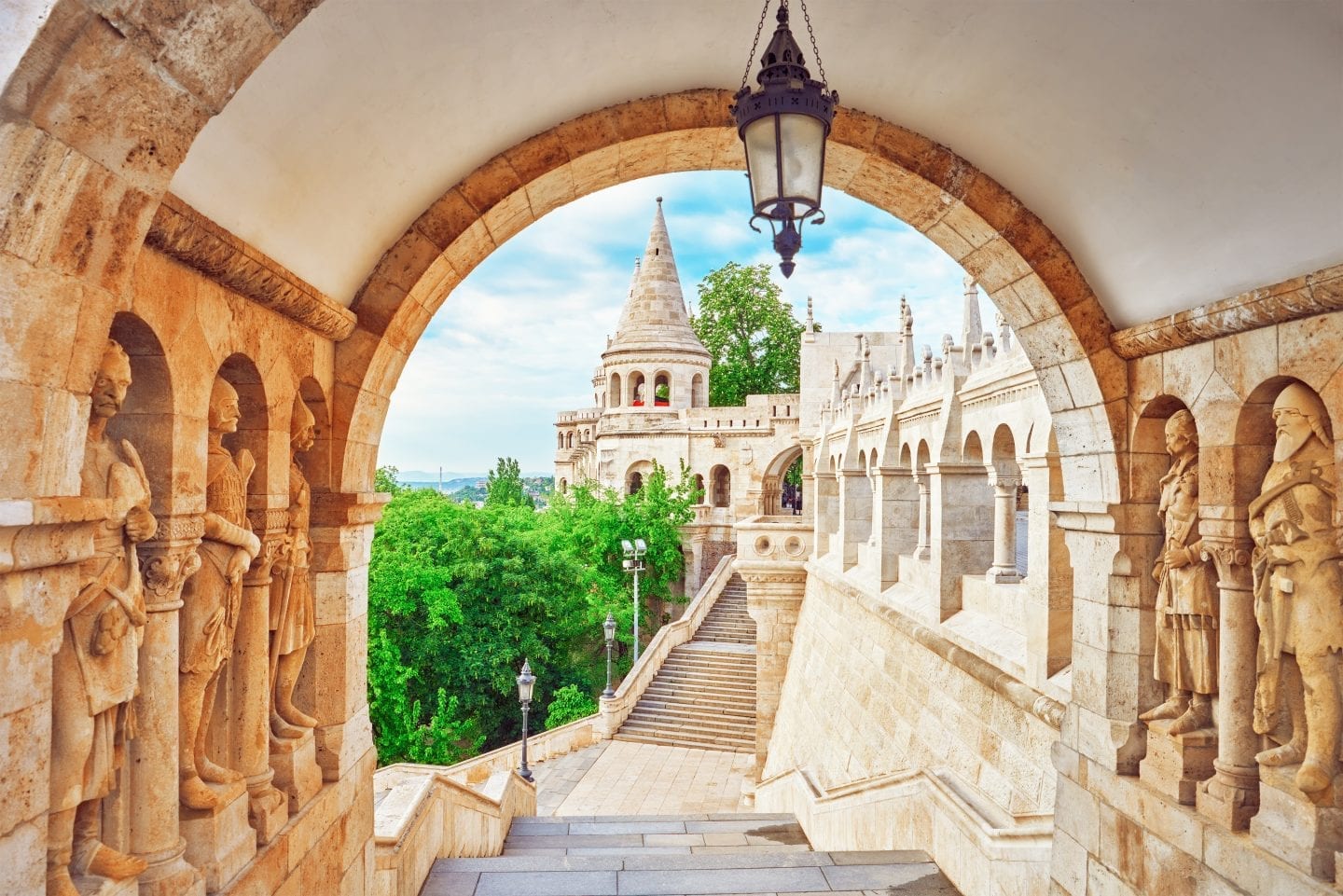 An iconic attraction during your 2 Days in Budapest, this tower was constructed in 1902 to serve as a lookout post for the best panoramic views in Budapest. The site was previously home to a real castle, but today is not a true fortification structure.

There are seven turrets at Fisherman’s Bastion, representing the seven different Hungarian tribes who founded where Hungary is today in the year 895. You’ll find a café on the terrace and a chapel inside the building, which opened in 2013.

Fisherman’s Bastion is open all year round, day and night. Entrance is free to reach the balconies, while you can pay a nominal fee to reach the top turrets – and it is one of the best Instagram spots in Budapest! 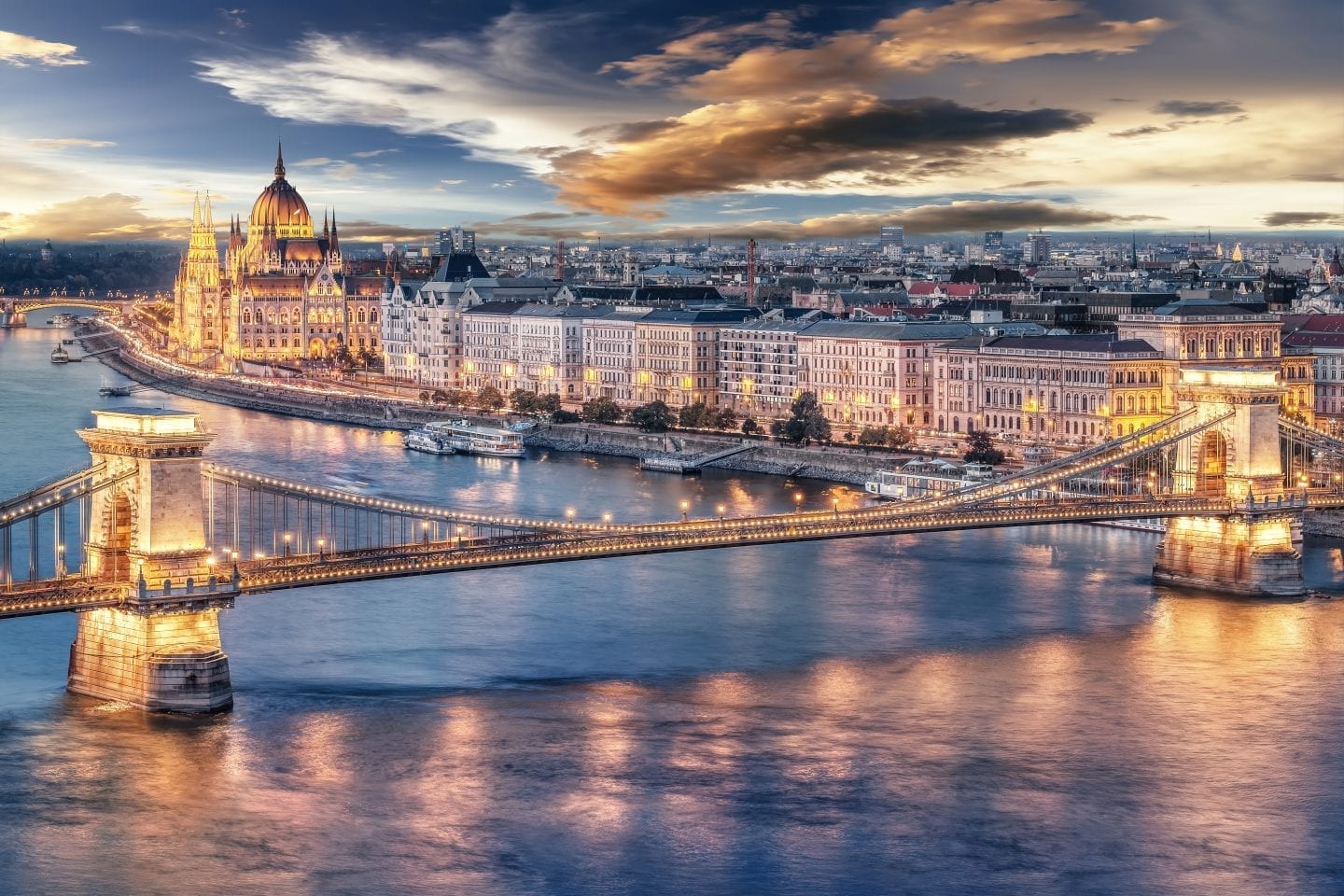 A visionary leader in 18th century Hungary, Count Széchenyi proposed building a strone-bridge to connect Pest and Buda, what became a symbolic building of Budapest and one of Europe’s most widely known bridges. Designed by architect William Tierney Clark, today visitors enjoy expansive panoramic views from its height. There are iconic stone lions sculpted on either side of the bridge’s entrance.

Chain Bridge is 380 meters long, and only 14.8 meters wide, with two traffic lanes and pavement walkways to see views of the Parliament and Danube River.

The bridge first opened in 1849 and was destroyed during World War II.  It was rebuilt on the centennial anniversary of its construction in 1949.

Shoes on the Danube Promenade 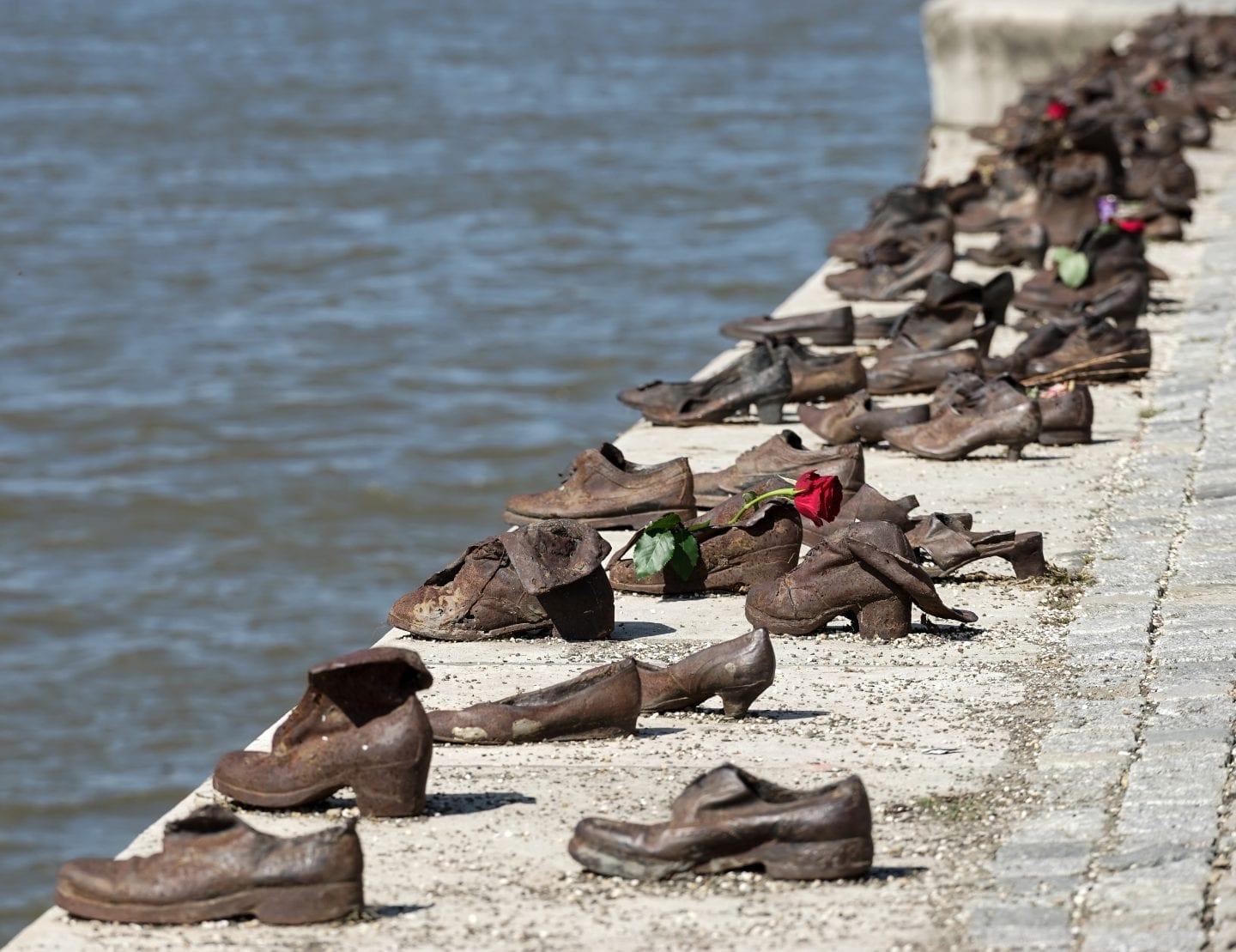 This iconic landmark in Budapest is filled with a noteworthy history. After Hitler overthrew the Hungarian government’s leader in 1944, he named Ferenc Szalasi, a significant follower of Hitler’s philosophies on governance and leadership. In creating an anti-Semitic state, approximately 80,000 Jews were forced to leave Hungary in a death march, with roughly 20,000 brutally murdered at gunpoint along the Danube River. The victims were forced to remove their shoes before being executed, and their bodies fell over the ledge and washed away into the Danube River.

It takes talented professionals to translate this tragedy into a visionary masterpiece. Film director Can Togay collaborated with sculptor artist Gyula Pauer to produce a monument of 60 pairs of shoes, authentic in size and detail, replicated in sculpted iron. The artwork is easily understood yet very chilling, replicating the feeling of individuals who left this earth to soon, with only their shoes remaining. Footwear was carefully selected to represent the various types of people murdered there: a woman’s heels, a man’s work boots, and children’s tiniest shoes. The sculptures speak the words of souls no longer alive, and allow visitors to reflect and remember the hate that stemmed from Hitler’s rule in World War II.

This is one of the city’s landmarks not to be missed during your 2 days in Budapest. As a tip, if you visit prior to sunset, there are incredible views of the sun cascading down below the city as the streetlights brighten. While it may be a somber occasion, you will leave feeling inspired. 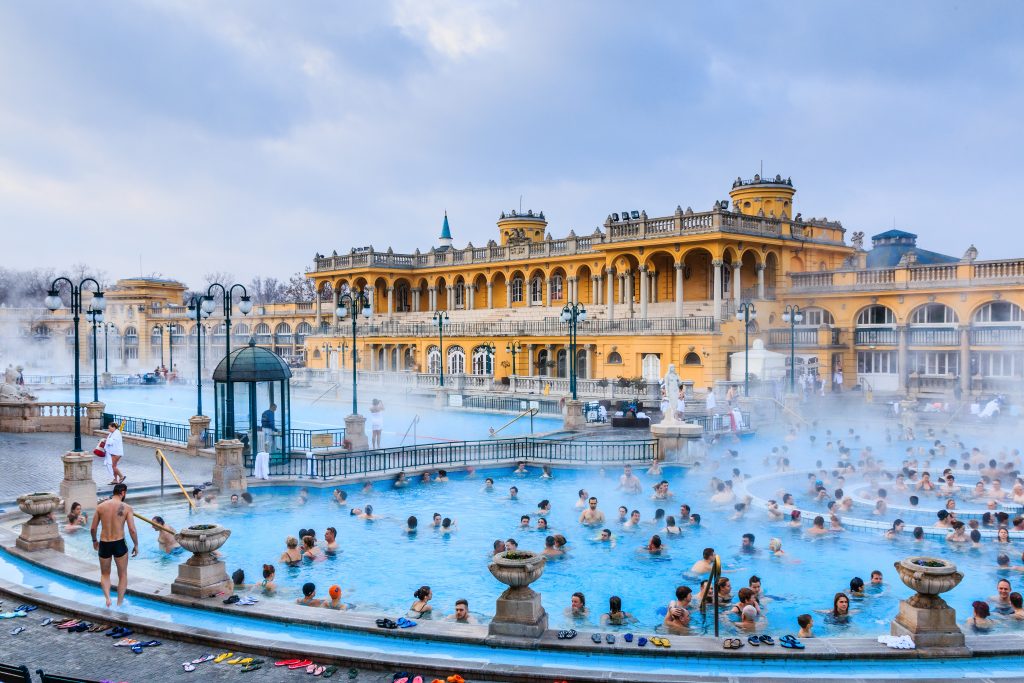 There are several baths around the city that you can enjoy both public and private. It is a very popular thing for locals and visitors to do. If you feel like going for a soak, this should not be missed. If you plan to be in Budapest for three days or more, you could enjoy a spa on several days.

Places To Eat In Budapest

There are many popular dishes to try among noteworthy Hungarian cuisine, and you’ll be challenged to fit as much as you can during your 2 days in Budapest!

Enjoy a special meal at the New York Café, a staple among culinary attractions in Budapest. This spot, found in the Jewish District, is known for high tea, afternoon lunch, or romantic dinners. The cuisine ranges from Italian, Eastern European, Hungarian, and more.

The New York Café is known as “the most beautiful café in the world” and has stunning design with impeccable service to match its grandeur. The historical building is beautiful, with high ceilings, remarkable hand-painted artwork, and more. The attention to detail in the experience makes your visit all the worthwhile, even if you have only 2 days in Budapest.

For a café beverage, consider a 24 Carat Gold New York Hot Chocolate. Starters include Foie Gras with Chervil, Buffalo Mozzarella with Tomato and Basil, a New York Caesar Salad, and more. The restaurant is known for fine pasta dishes, including Capellini with Wild Mushrooms and Ricotta, as well as traditional Beef Goulash Soup with Beans and Homemade Noodles. When it comes to Main Courses, you’ll find the New York Café knows the classics of Hungary and delivers. Wiener Schnitzel, Fillet of Pike Perch, Roasted Pink Duck Breast, and more are offered. Fine pastries are a delicacy in Budapest, and you’ll find no shortage of unique desserts here, including a selection of cakes, a Cottage Cheesecake with Sour Cherry, Tiramisu, Strudel, Sponge Cake, and more. Spend your 2 days in Budapest enjoying all the flavors found in this culturally rich European city, and be sure you plan a stop at the New York Café.

Reservations are recommended, especially for dinner. Visitors flock to the New York Café for its high design, and you won’t be disappointed by the variety of delicacies offered or the impeccable service. 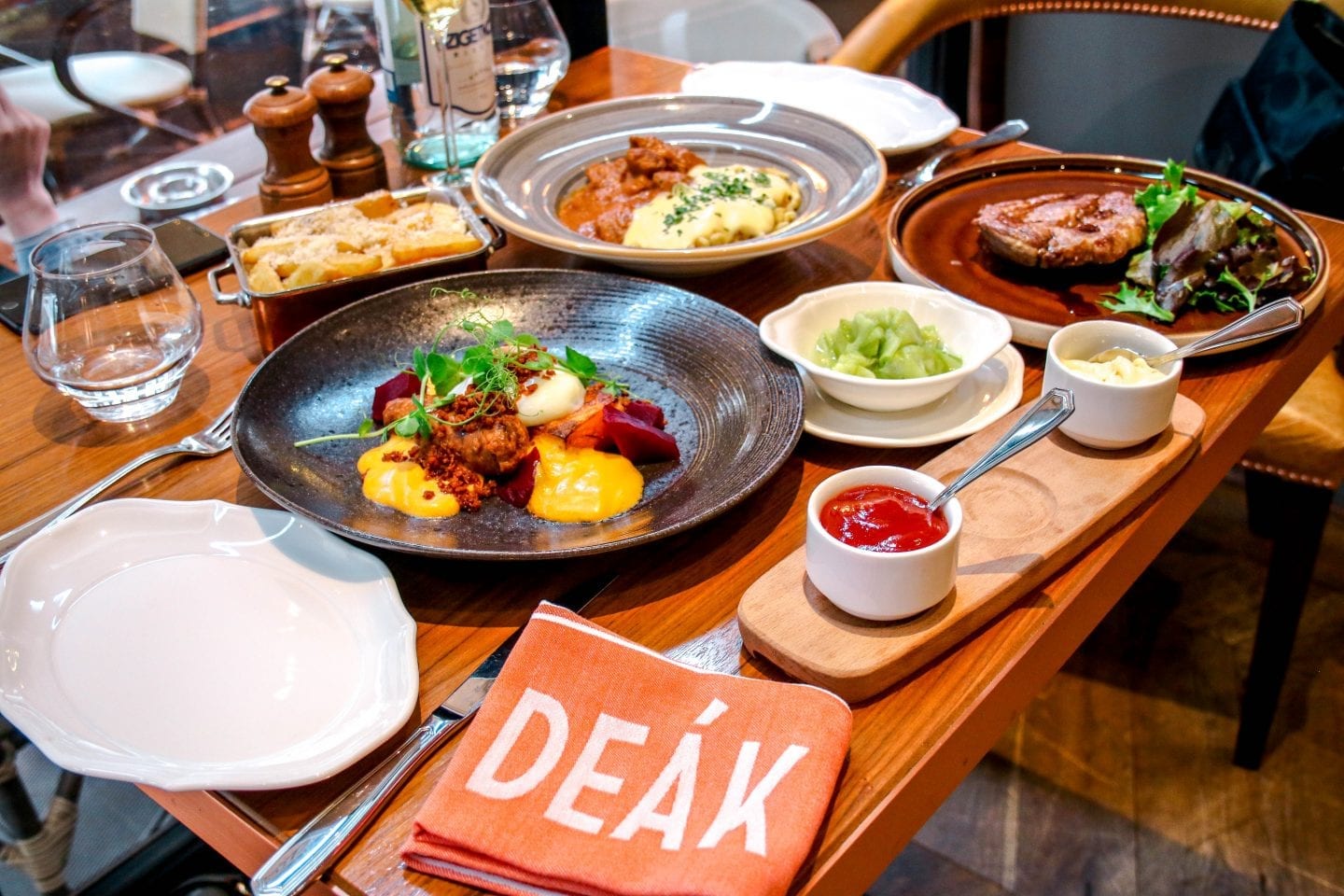 Located inside The Ritz-Carlton, Budapest, this dining establishment is not only gorgeous but serving incredible food. All the specialty Hungarian dishes were tried (goulash, veal shoulder paprikas, etc) and it did not disappoint! The real winner of dinner was dessert though. So don’t skip on trying the Famous Royal Chocolate Cake! 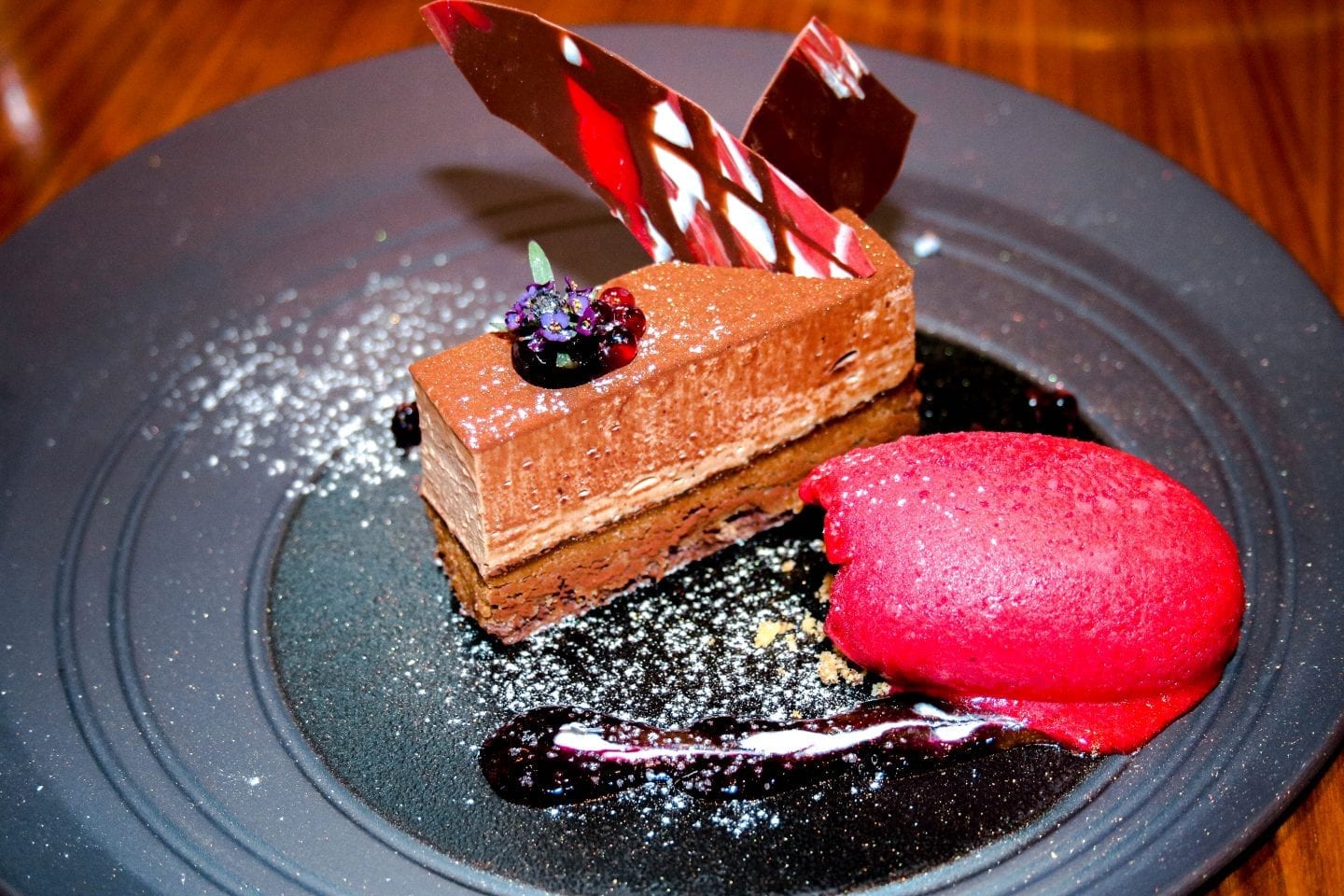 Where To Stay During Your 2 Days In Budapest 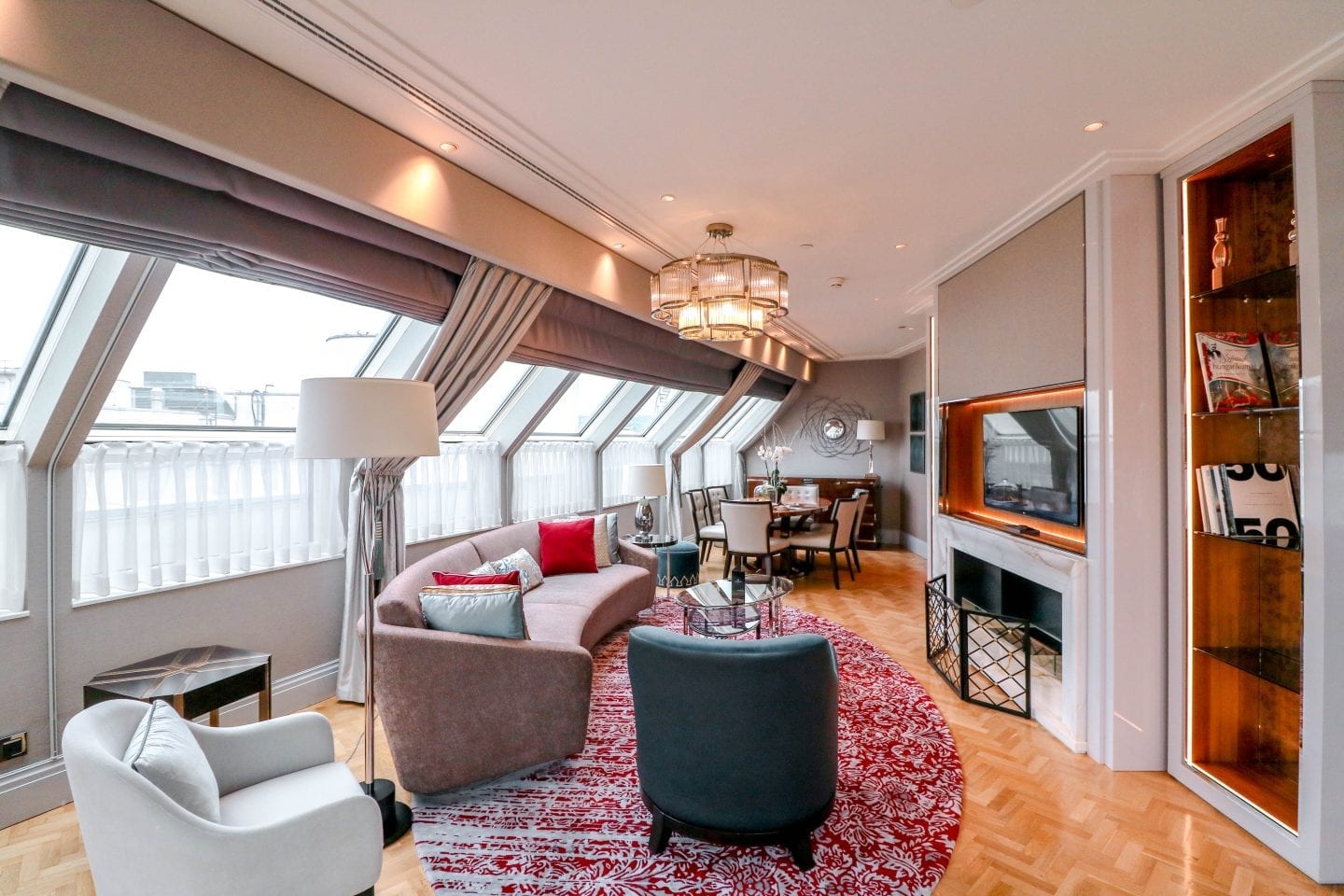 If you are looking to be centrally located in Budapest and staying at one of the best hotels the city has to offer, let The Ritz Carlton, Budapest be your home for your stay. Located directly across the street from the Budapest Eye and within striking distance of many major attractions, this opulent hotel you won’t soon forget.

Taking a River Cruise After Your Visit?

This visit to Budapest was in line with a Viking Grand European Tour and we started our visit in the city one day before we boarded the ship. You will however get a day and a half in Budapest on this specific cruise itinerary. I recommend coming in a day early and checking into the Ritz Carlton Budapest and exploring some of the city before your river cruise departs.

This will give your body time to adjust to the time difference (if you have one like I did coming from the US) and some extra time to explore Budapest before starting your journey on the Danube.

2 Days in Budapest: Know Before You Go 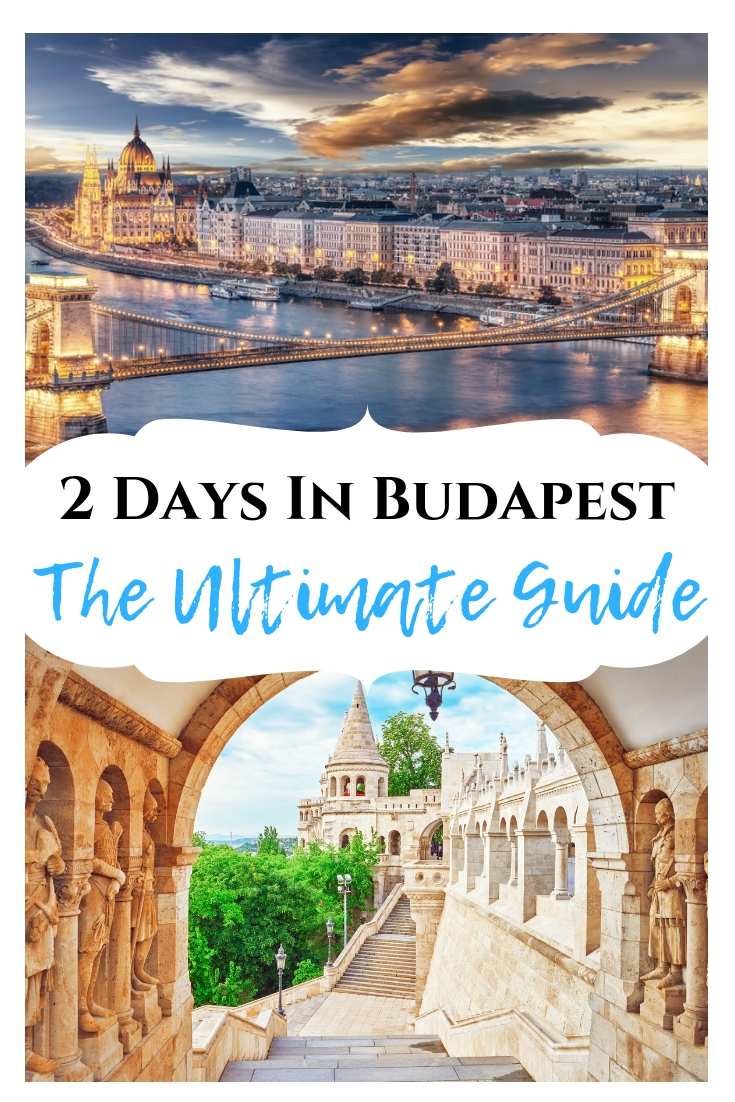 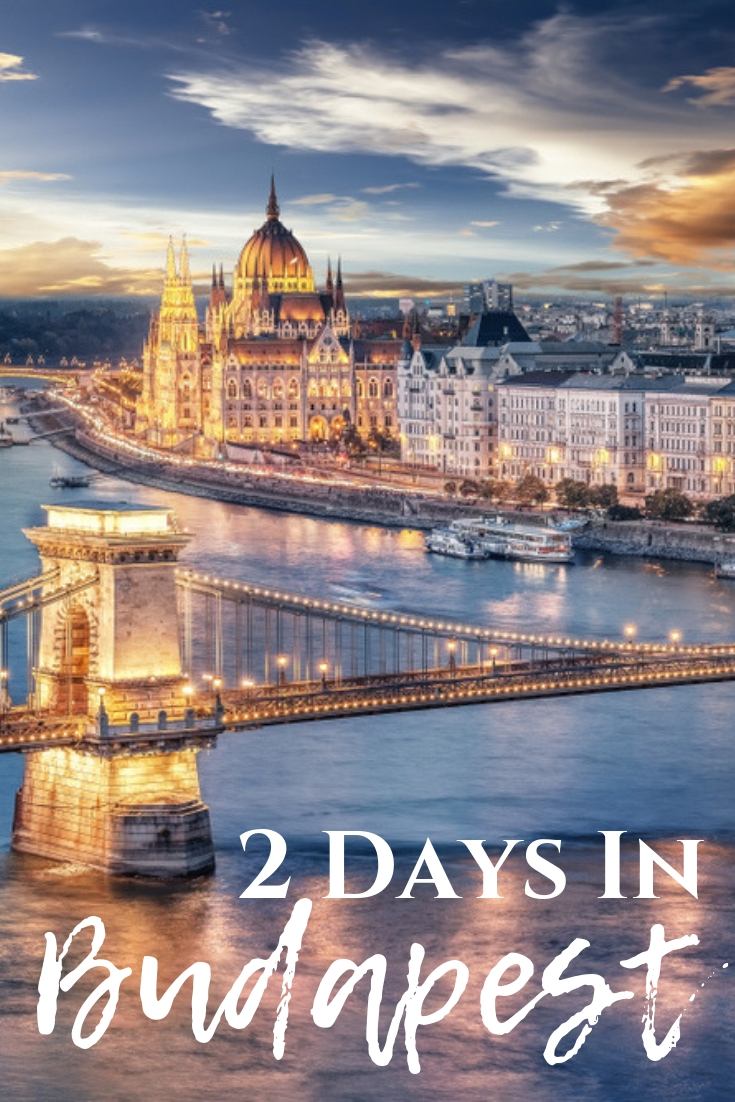