Scotland, the northernmost country in the United Kingdom, is a land rich with history, natural beauty, and a seemingly endless number of places to visit and experience what life in this northern nation is all about. Below you will find a number of interesting facts about Scotland to get you better acquainted with the storied antiquity and modern features of this country. 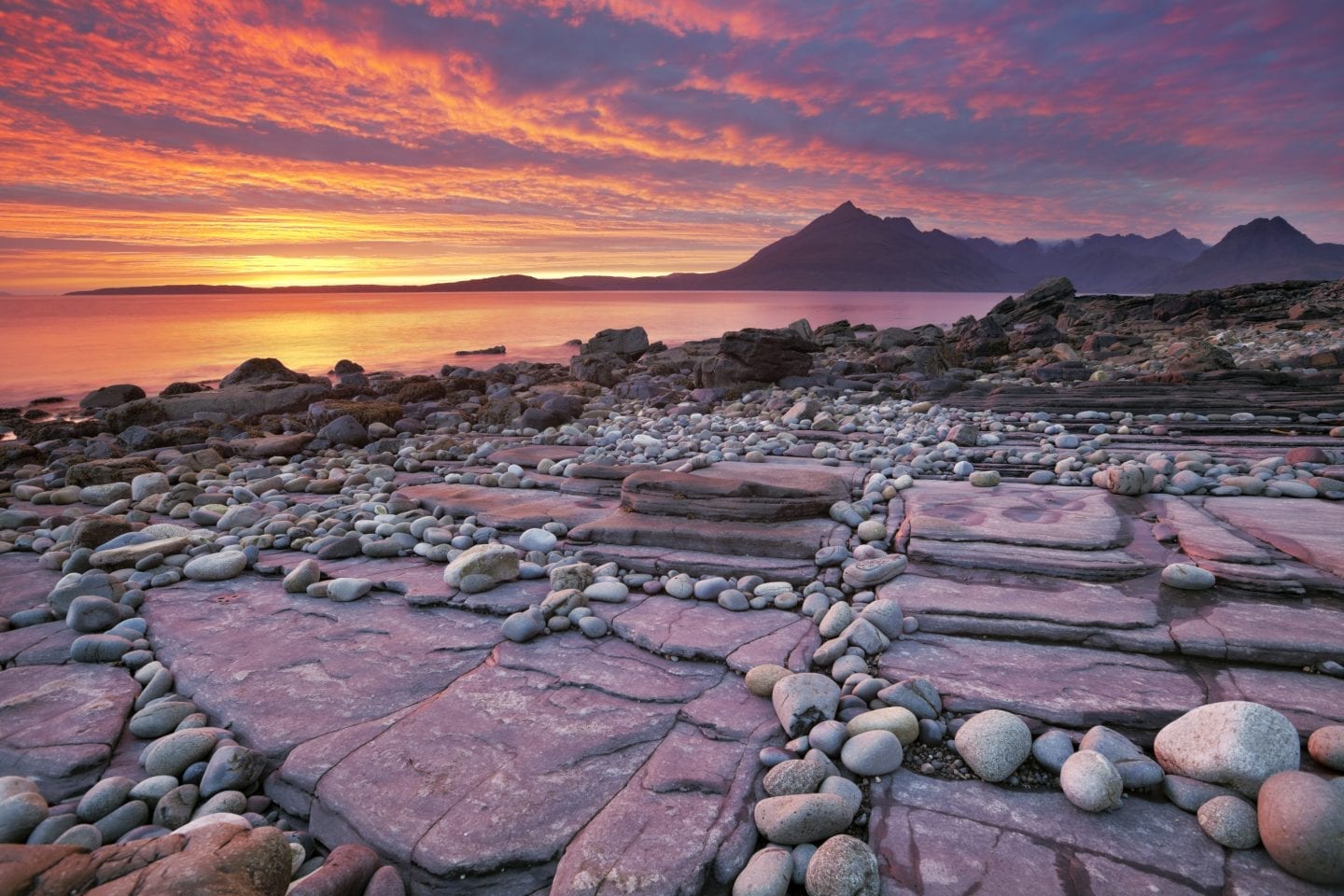 Sunset in the Isle of Skye

Making up the northern third of Great Britain, Scotland is over 30,000 square miles (just slightly larger than the state of South Carolina and a bit smaller than Austria) of rolling lowlands and hills, with numerous mountains dotting the landscape and nearly 800 islands surrounding the mainland.

Scotland’s high level of tectonic plate activity is to thank for its many peaks, as well as the impressive variety of rocks that can be found all over. The tallest of all these peaks is Ben Nevis, towering above its surroundings at 4,413 feet tall. This now-gentle giant used to be an active volcano until it collapsed on itself millions of years ago, and its Gaellic name means “mountain with its head in the clouds”. Around 100,000 visitors climb to its summit every year.

One of the most interesting facts about Scotland: According to the Office for National Statistics, Scotland is the best-educated country in Europe, with approximately 45% of Scottish adults between 25 and 64 having received tertiary education.

In 2014, Scotland had a national referendum regarding whether they should be independent from the UK or if they should remain a part of it. They voted to remain in the UK with about 55% of the vote, with many Scottish citizens reporting their main reason for voting that way was their desire to still use the pound sterling as their currency. With Brexit proceeding, there has been talk of a second referendum within the next few years to determine whether Scotland should declare independence from the UK in order to be able to rejoin the EU.

Scotland is well-known for its many castles. Chief among them is Edinburgh Castle, a 12th century fort with the well-earned moniker of being “one of the most attacked castles in the world”, surviving 22 sieges across the centuries, if that isn’t one of the most interesting facts about Scotland, we don’t know what it. Having played a key role in the Wars of Scottish Independence, these days the only wars being fought are between reenactors showing off their costumes and weapons for the 1.4 million visitors who pass through its sturdy gates every year. 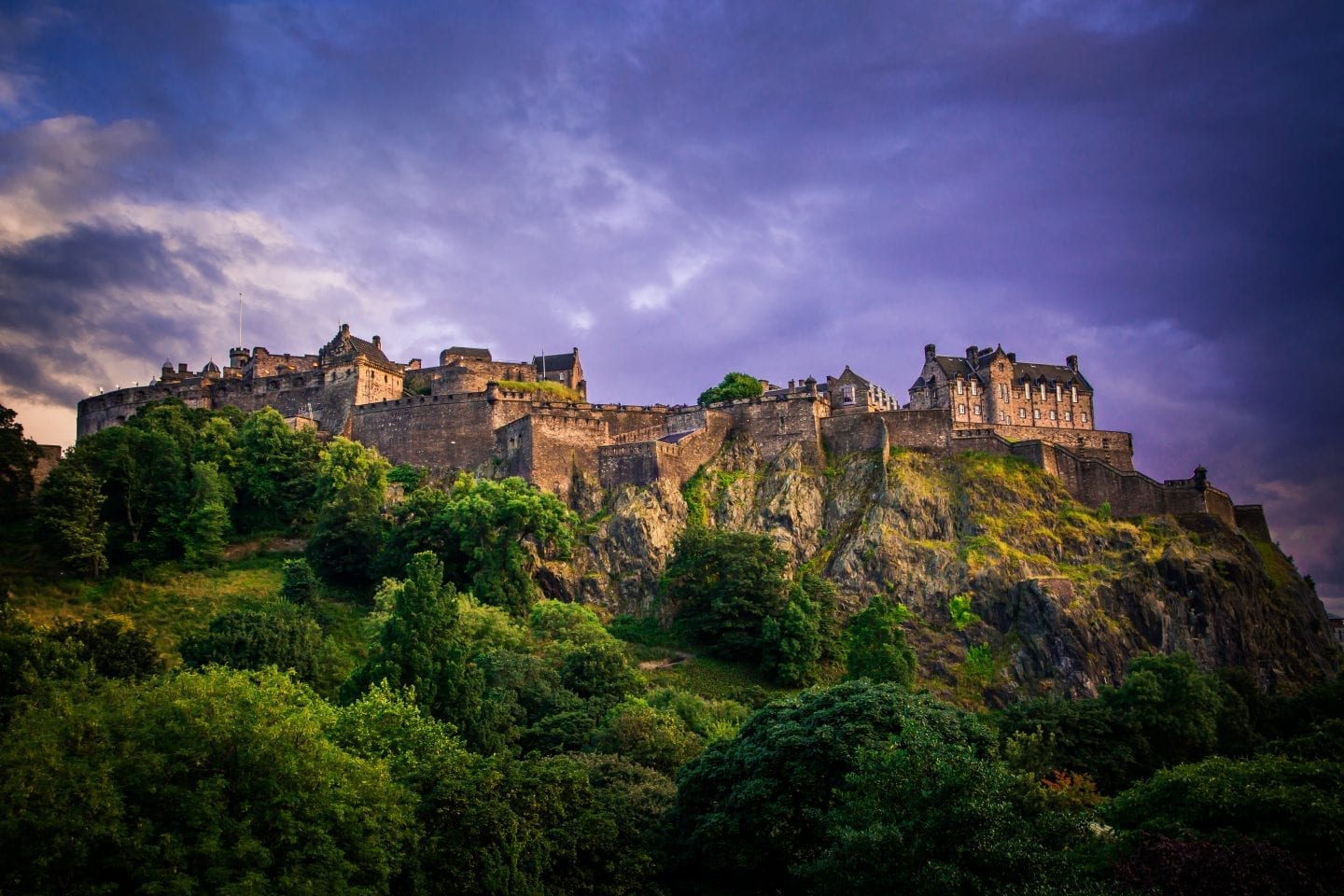 Scotland’s natural beauty and tranquility led it be ranked among the top places in the world to be married, and the most popular locales of all here is Gretna Green. With its rich history of serving as a place for eloped lovers to tie the knot (often by blacksmiths, colloquially known as “anvil priests), it continues to be a highly sought-after place for those seeking to be united in an alluring setting.

Scotland has a large number of art museums, including the Scottish National Gallery in Edinburgh which is filled to the brim with classic works, as well as the National Museum of Scotland, a beautiful building designed in the Venetian Renaissance style and home to antiquities and works spanning all of Scottish history, from ancient dinosaur fossils to modern sculptures by Andy Goldsworthy, and is famous for putting up fake exhibits on April Fool’s Day just to keep their visitors on their toes!

The Riverside Museum in Glasgow has a variety of high-tech interactive displays centered around transportation and the modern era. It won the 2013 European Museum of the Year Award, and counts among its collection several steam locomotives, classic cars, recreations of early 19th/20th century streets for visitors to explore, large seafaring vessels, double-decker buses, and even a Star Wars exhibit.

Interesting facts about Scotland: Healthcare is provided at no upfront cost to Scottish citizens (being paid for entirely by taxes), though overseas visitors are usually charged for standard services. However, emergency treatment is free to everyone regardless of their residency status.

Scotland has great natural beauty, and the nation maintains that beauty in protected preserves. One of the largest examples of this is the Glasgow Botanic Gardens, home to a variety of native and foreign flora, as well as the Kibble Palace, a recently-restored iron-framed glass greenhouse which houses the national collection of tree ferns, many of which are over a century old. In Edinburgh, the Royal Botanic Garden welcomes visitors from all over the world, in addition to maintaining both global biodiversity and the quarter million plants from over 13,000 species that are grown here.

Being the windiest country in Europe, Scotland is definitely a place you’ll want to hold onto your hat in. The northern and the western regions of Scotland tend to be the windiest of all, with the record held by Cairngorms in 1986 with a wind gust measured at 173 miles per hour!

Scotland is known for being a leader in the area of primate behavioral research, with much of this research being done at Edinburgh Zoo. Home to Living Links, a primate center, and the Budongo Trail, a housing area for chimpanzees, there are plenty of opportunities to learn about these social creatures and what life is like in their natural habitats.

Thanks to the Town Police Clauses Act of 1847, it was illegal to fly kites under any circumstances in Scotland for over 150 years, with that provision of the law finally repealed in 2015. However, it remains illegal to extinguish any lamp that isn’t yours or knock on doors with the intention to annoy a home’s inhabitants, so be forewarned that practical jokes aren’t quite appreciated here!

Of all the facts, the most interesting facts of Scotland lie within their national animal:  the unicorn, though sadly you won’t be able to find any in local zoos!

Sir Nils Olav III is colonel-in-chief of the Norwegian King’s guard and a resident of Edinburgh, Scotland. This by itself wouldn’t be too amazing aside from the fact that Sir Olav is actually an emperor penguin! A gift from Norway, he has been promoted every time the King’s Guard has visited Scotland, eventually becoming a knight and currently holding the rank of Brigadier.

Haggis, a meal made with sheep’s or calf’s organs along with suet and oatmeal, is a traditional dish of Scotland. If you want true Scottish Haggis, you will have to come here to enjoy it, as interesting facts about Scotland, importing it into the United States was made illegal in 1971 and is still illegal to this day!

Sports play a large role in Scotland’s culture, with football and rugby being the most played and followed by Scots. Golf is also incredibly popular here, and Scotland is home to several globally-ranked courses, including St. Andrews which has hosted more Opens than any other golf course in the world and is considered to be the spiritual home of the sport.

Interesting facts about Scotland: As a part of the UK team in the Olympics, Scotland has had an impressive performance over the years. Most recently in the 2016 Olympics, Scottish citizens won two gold medals in track cycling, as well as golds in rowing and tennis.

With its gorgeous rolling landscapes, Scotland has become a popular place to set a number of famous films. The Jacobite steam train that travels through the Scottish Highlands was featured as the Hogwarts Express in the world-famous Harry Potter film series. Mel Gibson’s most famous film, Braveheart, both took place in and was filmed in the Loch Leven and Fort William here, telling the story of William Wallace’s valiant revolt against King Edward the First of England. It’s not often that castles and comedy intersect, though they do at Castle Stalker, better known to comedy fans as ‘Castle Aaarrrrgggghhhh’ from the beloved film Monty Python and the Holy Grail. One of the interesting facts about Scotland, is that these films drive tourism to the country. 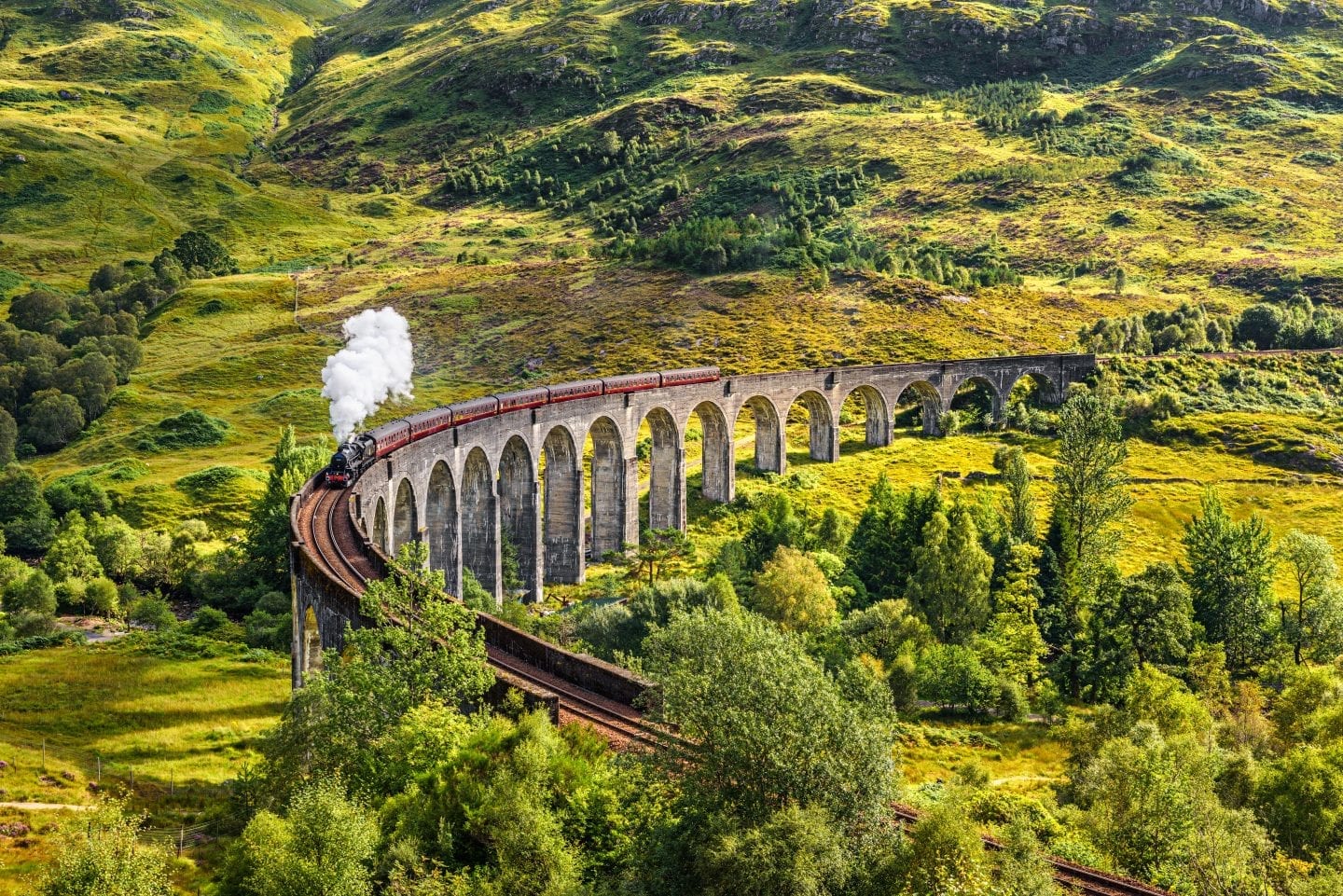 The economy of Scotland is an open-mixed economy similar to England, and its chief exports are scotch whisky, salmon, professional services, petroleum, chemical products, and minerals. Scotch whisky alone accounts for around £4.25 billion pounds of income, and supports around 35,000 jobs, with distilleries found in nearly every part of Scotland. By Scottish law, scotch whisky must be aged for a minimum of three years in oak barrels to be permitted to use the name.

Scotland uses the pound sterling as its currency just like the rest of the UK and is one of the most widely-traded currencies in the world. While England no longer uses £1 notes since it has retired their manufacture (instead preferring the £1 coin), Scotland continues to accept them and any other old notes so long as those involved in the transaction are okay with it.

In central Scotland you can find the Falkirk Wheel, a masterwork of engineering opened in 2002 and designed to link the waterways of Glasgow and Edinburgh. The wheel essentially lifts boats entering it by nearly 80 feet to be at the right elevation to continue along their journey and is the only rotating boat lift of this design in the world. One of interesting facts about Scotland -the funding for this project was paid for in part by national lottery proceeds and is maintained by boat tours given to the 400,000 people who visit the Wheel every year.

Scotland is a memorable mix of gorgeous scenery, fascinating history, and modern offerings. The interesting facts about Scotland above only scratch the surface of the many aspects and mysteries of what the Scottish mainland and isles have to offer, and there’s no time like the present to make Scotland’s history part of your history. The nation itself may be on the little side, but as the Scottish say: “Guid gear comes in sma’ bulk”, good things come in small packages! 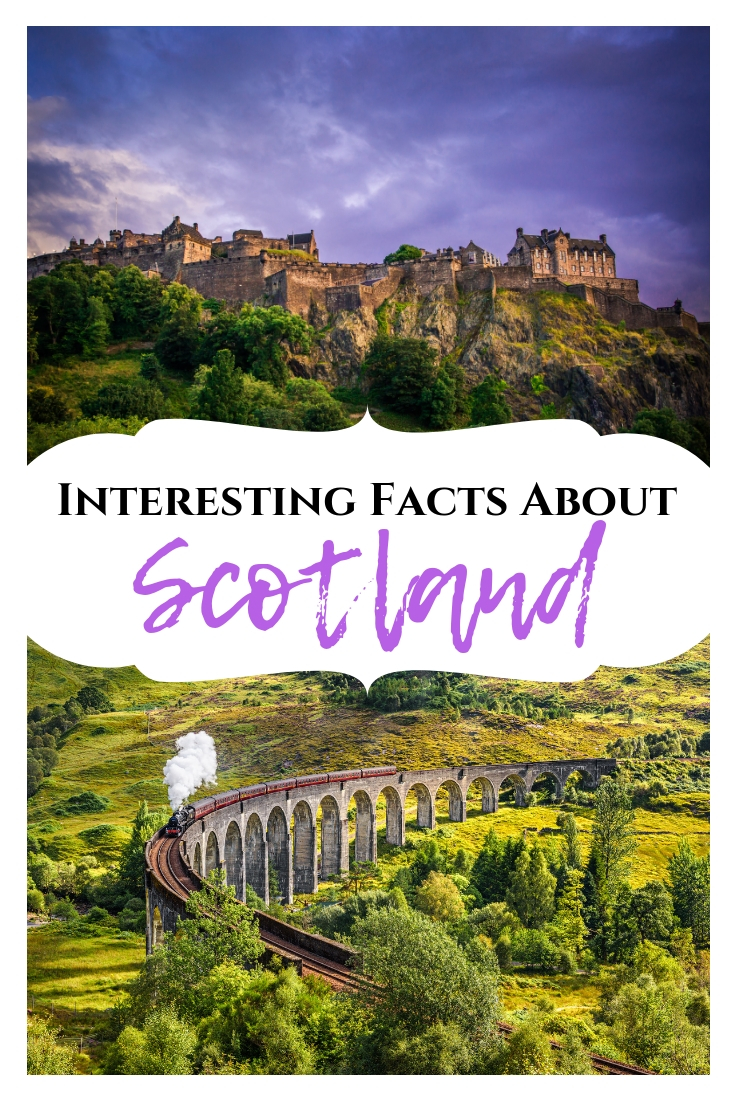 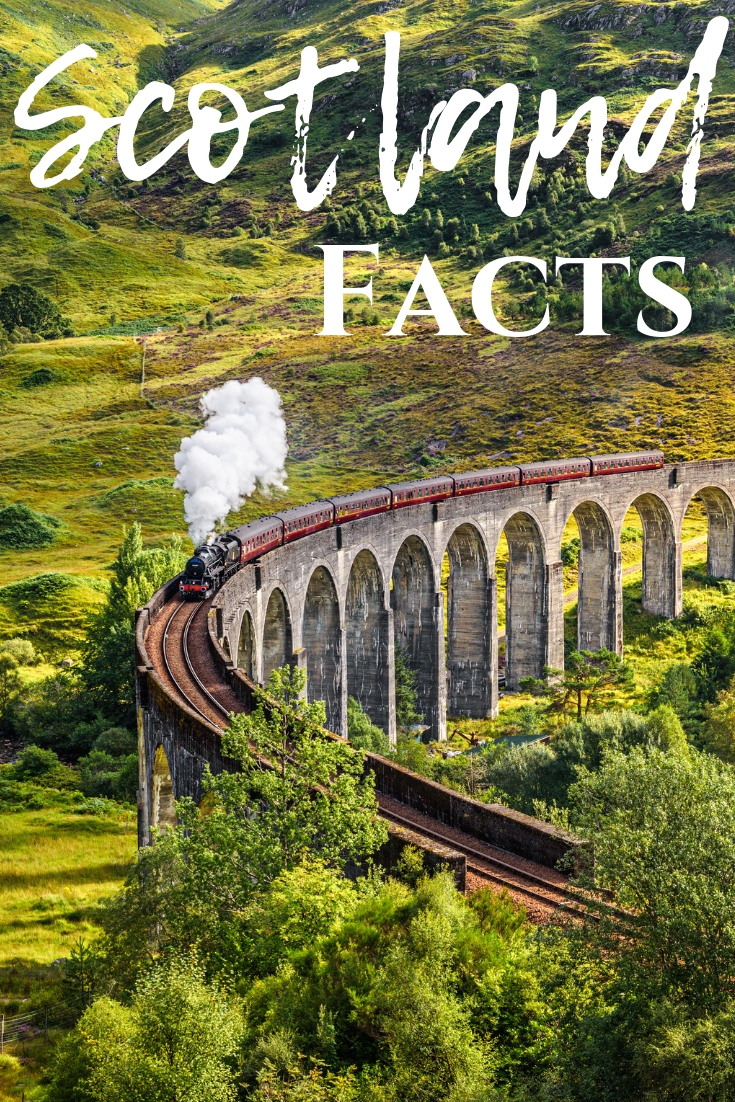 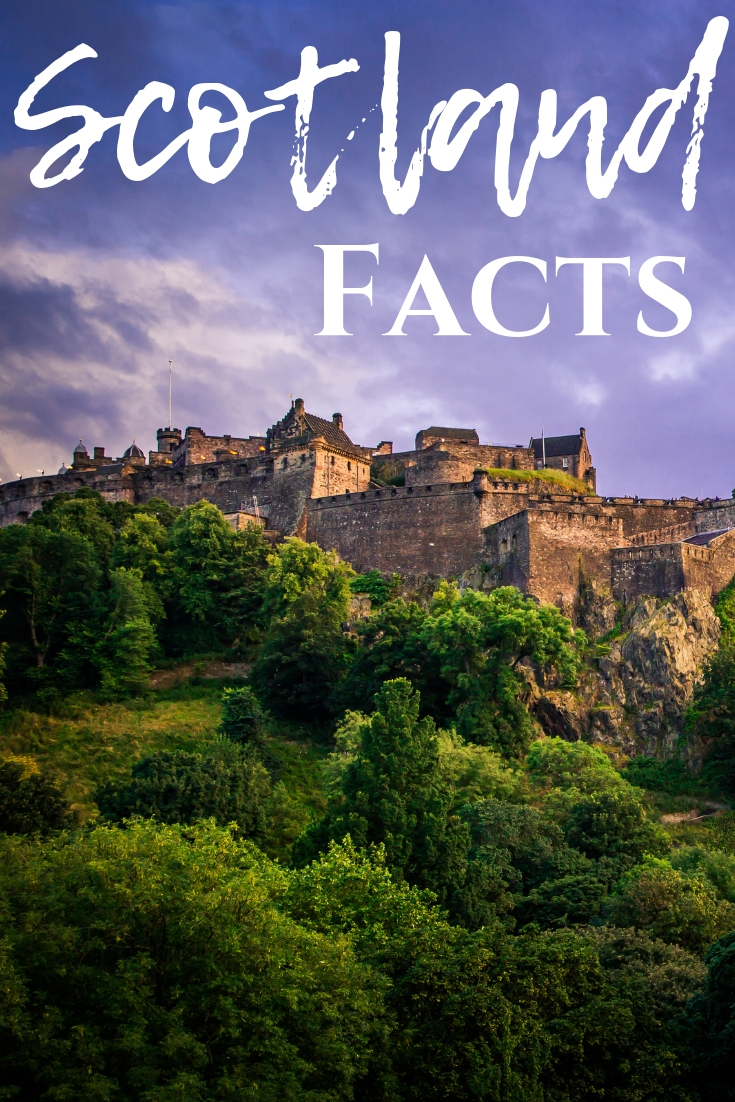