When planning your visit to the capital of Austria, check out this post about Vienna facts that are sure to help you experience everything this historic and rich country has to offer. As one of the oldest cities in Europe, Vienna is filled to the brim with history, art, cultural and music and displays an intriguing mix of history and modernity, often side-by-side. As a major tourist destination in Europe, Vienna is accessible, exciting and filled with many different things to do. 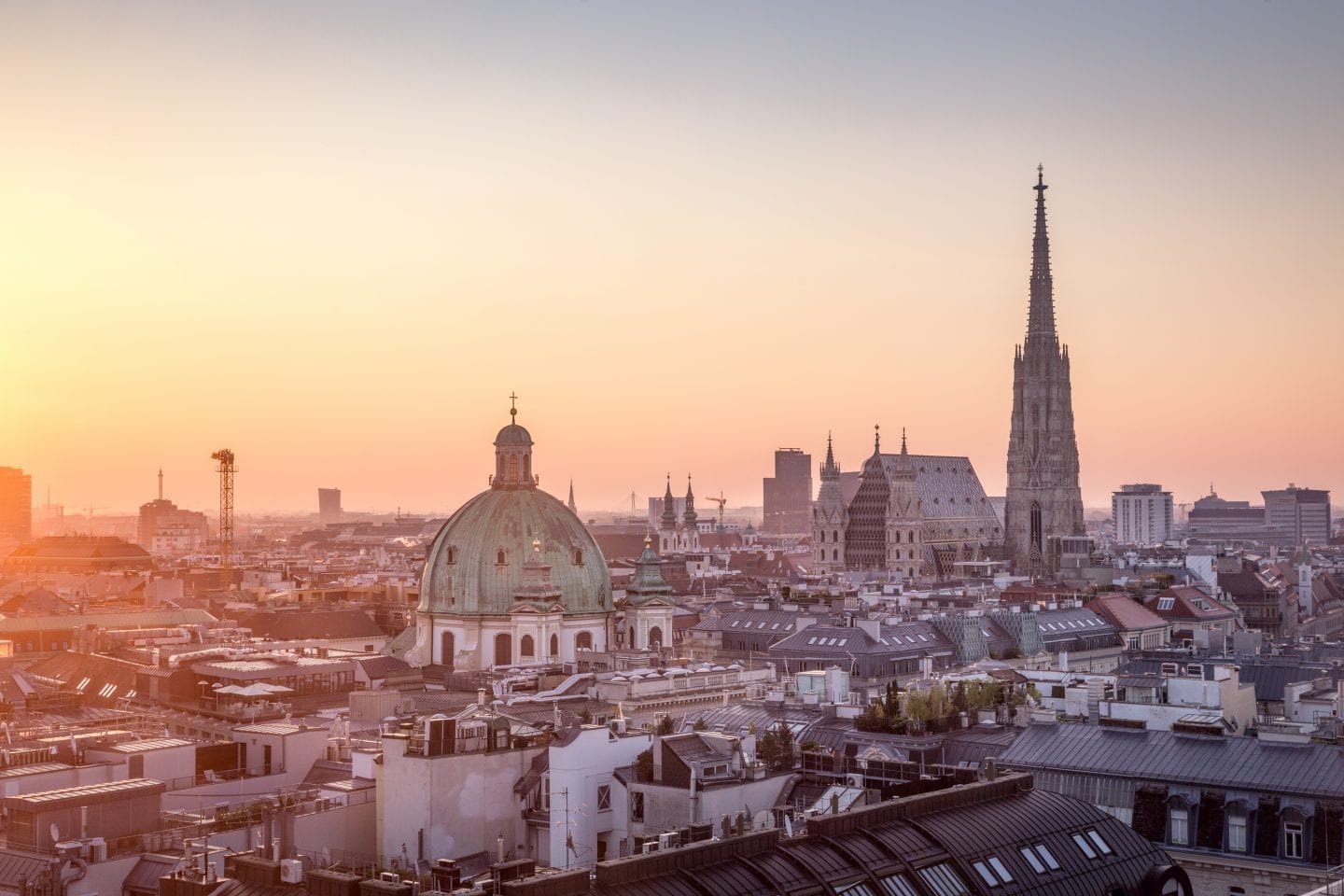 Located within central Europe, the landlocked country of Austria is approximately twice the size of its neighbor Switzerland, making it roughly the size of South Carolina. One surprising fact about Austria is that it shares its border with eight different countries. Nestled between the Danube River and the Alps, this Democratic Republic is home to about 8.7 million people with 1.8 million of those people calling the capital of Vienna their home, making it the largest city in the country of Austria. Politically, Vienna is a safe haven and a powerhouse within Europe. Like it’s aforementioned neighbor, Vienna, Austria is one of six countries in Europe that have declared themselves permanently neutral, a fact which is written into their Constitution. This neutrality has also made Vienna the headquarters for OPEC, the Organization of Petroleum Exporting Countries, since 1965. As an important trading center for centuries, the capital of Austria is also home to the oldest operational stock exchange in the entire world, a Vienna fact that this country is proud to claim since 1771.

When it comes to Vienna facts that tourists will find most helpful, it should be a relief to know that while German is the national language, English is widely spoken in and around Vienna, Austria, particularly in tourist locations, hotels, restaurants and landmarks.

Another Vienna fact that will come as a relief to intrepid explorers is that this city is surprisingly compact and very walk-able. For those destinations that are a bit too far to walk to, Vienna’s public transportation system is often ranked as one of the best in the world with economical day and week passes and frequent stops. Additionally, the transportation system works on an honor system that prevents bottlenecks and traffic jams at turnstiles and ticket booths. This modern amenity will make it incredibly easy to visit the many unique and exciting historic sites within the city of Vienna, Austria.

This leads to another of the Vienna facts that not many people know; Vienna is home to the world’s oldest AND longest tram!

Speaking of oldest. Vienna is home to many sites that hold records throughout the world. The origins of Vienna as a settlement can be traced back to well before the Roman times and it is home to many sites that remain some of the oldest within both Europe and the world. Originally built in 1897, the Wiener Riesenrad is the world’s oldest Ferris wheel and is still operational today, rebuilt after sustaining damage in World War II. Another claim to fame is the Wiener Zeitung, which remains the oldest still published daily newspaper in the world, one of many Vienna facts that the Austrian people are proud of.

Something that many tourists and locals alike will enjoy is another of Vienna’s oldest landmarks. The Schönbrunn Zoo is the oldest zoo in the world, originally founded in 1752 as an imperial menagerie on the grounds of the Schönbrunn Palace. Listed as a UNESCO World Heritage site (one of nine within the country of Austria,) this zoo is home to over 700 different species, the most notable of which is the Giant Panda. Another of the Vienna facts that brings this country notoriety is the fact that the Schönbrunn Zoo is one of the few zoos that have had success in the natural breeding of pandas. Open daily at 9 am, the zoo is open 365 days a year, making it an easy and exciting addition to any Vienna itinerary.

The city of Vienna is filled with many other historical sites and was home to many of the world’s most notable composers and artists. Ludwig van Beethoven spent over 35 years in Vienna, first coming to the city in 1787. Much of his work was created in Vienna, even as his hearing began to fail. There are even records recounting the fact that Beethoven hid in the basement with pillows to cover his ears and protect his hearing during the bombings of the Napoleonic wars in Vienna, even as the royal family fled the city from the French invasion. Beethoven died in 1827 in Vienna, interred first in an outlying district before his exhumation and later burial within Zentralfriedhof cemetery alongside other musical greats such as Schubert, Mozart, Brahms and Strauss. Zentralfriedhof is the largest cemetery in Europe and the second largest cemetery in the world, covering nearly 2.5 million square meters and containing more that 300,000 graves and crypts where over 3 million are interred. It is so large that it operates its own railroad station and bus line, making this one of the more peculiar of the Vienna facts shared in this post!

If cemeteries aren’t your idea of a tourist destination, another place to experience the history and majesty of Vienna is the Cathedral of St Stephen. Construction on St Stephen’s Cathedral began in the 12th century and continued for many centuries after that. Most notable of its features aside from it’s colorfully glass tiled roof are the 13 bells hung within the Cathedral, including its most famous bell, the Pummerin. This bell in the north tower of the cathedral is the second largest free-swinging bell in all of Europe, yet another of the Vienna facts that prove how historic this city truly is!

Despite this abundance of history and charm, Vienna is hardly a stodgy or old city. In addition to its modern and efficient public transportation system, evidence of this city’s modernity can be seen in between each of its historic sites and along its ever-growing city skyline along the Danube River. In fact, right across the street from the 12th century Cathedral of St Stephen is the postmodernist architecture of the glass building Haas House. Built amid much scandal by Hans Hollein in 1990, this reflective structure mirrors the image of the cathedral and houses retail space as well as a restaurant. There was a lot of controversy surrounding such a modern structure in such close proximity to a historic landmark, a Vienna fact that many locals are surely still affected by today.

One of the most well known of the Vienna facts is that this city is the birthplace of the Viennese Waltz. During Waltz Season, which runs from November through March and peaks during Carnival in January and February, the city hosts well over 450 balls which can add up to roughly 2,000 hours of dancing! During Waltz Season, revelers dance along the streets and in the grand palaces and other magical venues within the city of Vienna.

Despite all this grandeur and spectacle, Vienna is also the perfect city to slow down and relax in. Set along the banks of the Danube River, the second longest river in Europe, Vienna has warm summers that provide the perfect atmosphere for relaxing with a Viennese coffee or a glass of wine. One of the little known Vienna facts is that this, the capital city of Austria, is the largest wine-growing city in the world. With over 17,000 acres of wine-growing land within the city limits of Vienna, the crops yield white varietals that are primarily consumed within the city itself, rarely exported to other countries and thus making this a rare treat to enjoy as you relax at one of the many cafes and restaurants that fill this city. Pair it with a croissant for an afternoon pick-me-up. Another one of the little known Vienna facts that comes as a surprise is that the croissant, a notoriously French pastry, was actually first created in Vienna in 1683, the first of such confections ever produced. It wasn’t until Marie Antoinette adopted it as her preferred treat that it became synonymous with France!

Another must-see during the warm summer months is Danube Island. Free admission to a 250 meter long family beach offers swimming, sunbathing and a playground, also adjacent to a large children’s water-park that also boasts free admission. Additionally, the more adventurous visitors can scale the heights of the climbing park located on Danube Island, offering breathtaking views of the Vienna skyline from 10 meters in the air. If heights aren’t your thing, you could bounce around on the world’s largest floating trampoline center, another of the Vienna facts that not many people know.

Another of the great things to do in Vienna is a visit to the Museumsquartier. With over 60,000 square meters of cultural space, cafes, museums and exhibition spaces, Museumsquartier is one of the largest cultural centers in the world. Yet another of many surprising Vienna facts!

With such a vibrant mix of history and modernity and a lengthy list of world records, Vienna, Austria is a truly remarkable city with a surprisingly small footprint and something for everyone. The many Vienna facts shared in this post will help you plan your trip, but you really have to see it to believe it when it comes to this vibrant and storied City of Music…and so much more!! Vienna should be on your European bucket list. 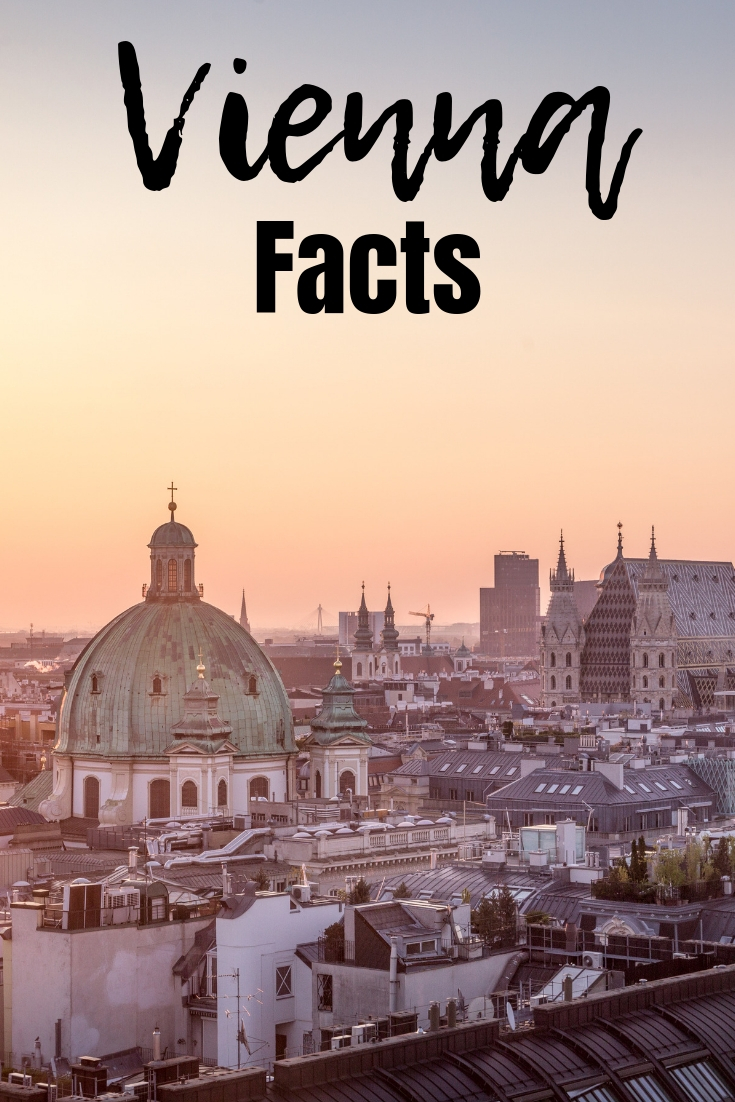