When it comes to iconic travel landscapes depicted on blogs, Instagram, and more, none compare to those from a Cappadocia hot air balloon ride. The pictures are rich, colorful, exotic, and enticing. Verdant greenery, rolling hills, distant valleys, and stellar views are all part of the experience. This post will provide all the details for you to have an exceptional journey on your Cappadocia Hot Air Balloon ride in Turkey.

Visitors claim the Cappadocia Hot Air Balloon ride as a novel, magical fairy tale, a journey full of wonder and incredible landscapes. You’ll see chimneys, pillars, cliffs, rivers, valleys, and all kinds of architectural structures from the high vantage points. Not to mention, the views of the numerous, colorful balloons transcending upon the Cappadocia skyline!

There are some attractions around the world that are worth an especially early wake up call, and taking a Cappadocia Hot Air Balloon is one of them. Most companies run the first flight before sunrise, and the following flight takes place 30 minutes after, staggering the crews from releasing and landing balloons. Why so early? Sunrise is one of the best times to capture the magnificent views of the valleys.

If you are planning a trip to Istanbul, you should take the plunge and add Cappadocia to your list. It is a quick 1 hour and 15~ minutes flight away and usually under $100 round trip for a flight with Turkish Airlines. There is no place in the world like Cappadocia and it will leave you awe with its majestic beauty. But above all else, the Turkish people are so kind and the food is exquisite. Definitely ass the Cappadocia hot air balloon experience to the top of your bucket list, and let this experience change your life. 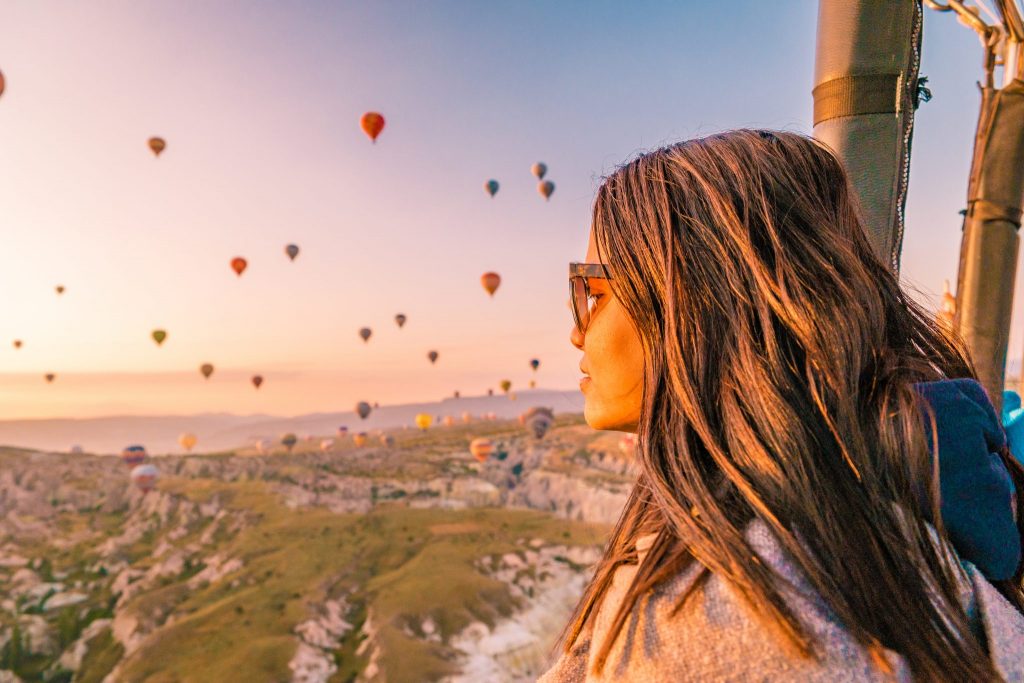 Back in 1783, an unmanned hydrogen balloon was launched and landed in Gonnesse, a suburb of Paris, France. Louis XVI decreed the first flight be flown with animals, so a sheep, duck, and rooster became the first passengers of a hot air balloon, with a successful landing. The first recorded manned flight in a hot air balloon took place in Paris, and even today in France, gas balloons are called “Charliers” while hot air balloons are referred to as “Montgolfiers”. 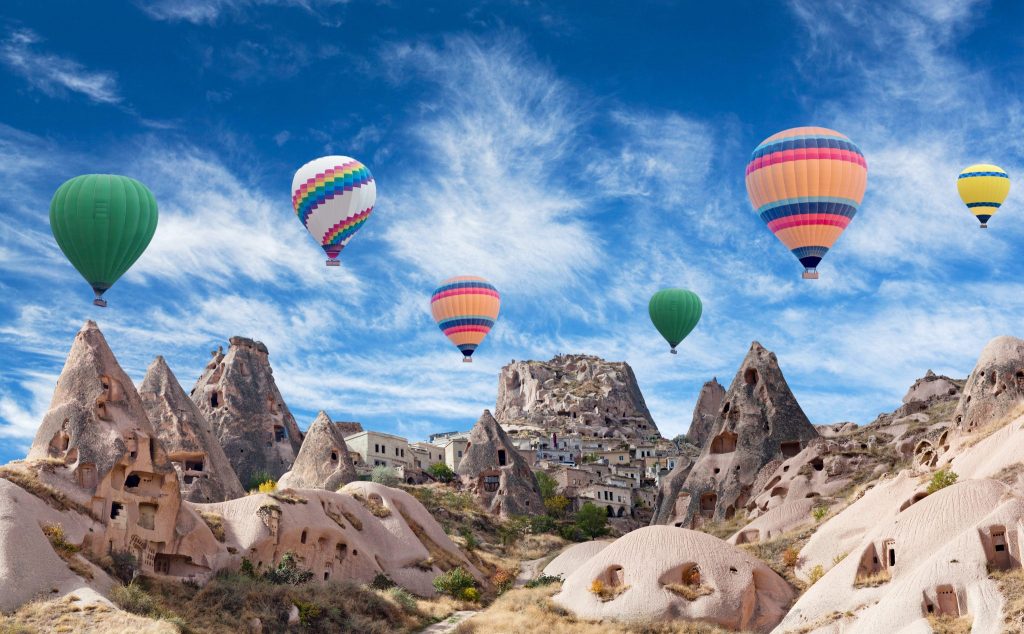 Many thousands of balloons have since taken flight, thanks to the efforts of Henry Cavendish, Jacques Charles, Jacques Etienne and Joseph Michel Montgolfier, Nicholas Louis Robert, Jean Francois Pilatre de Rozier, and Marquis Francois-Laurent d’Arlandes, among others. Below are featured vendors to consider when booking your Cappadocia Hot Air Balloon ride.

When it comes to a professional operation specializing in the ultimate Cappadocia Hot Air Balloon ride experience, the Hot Air Balloon Cappadocia company is among the experts. With specialized training for their balloon operators, participants receive an all-inclusive ride that is equal parts exquisite and memorable. 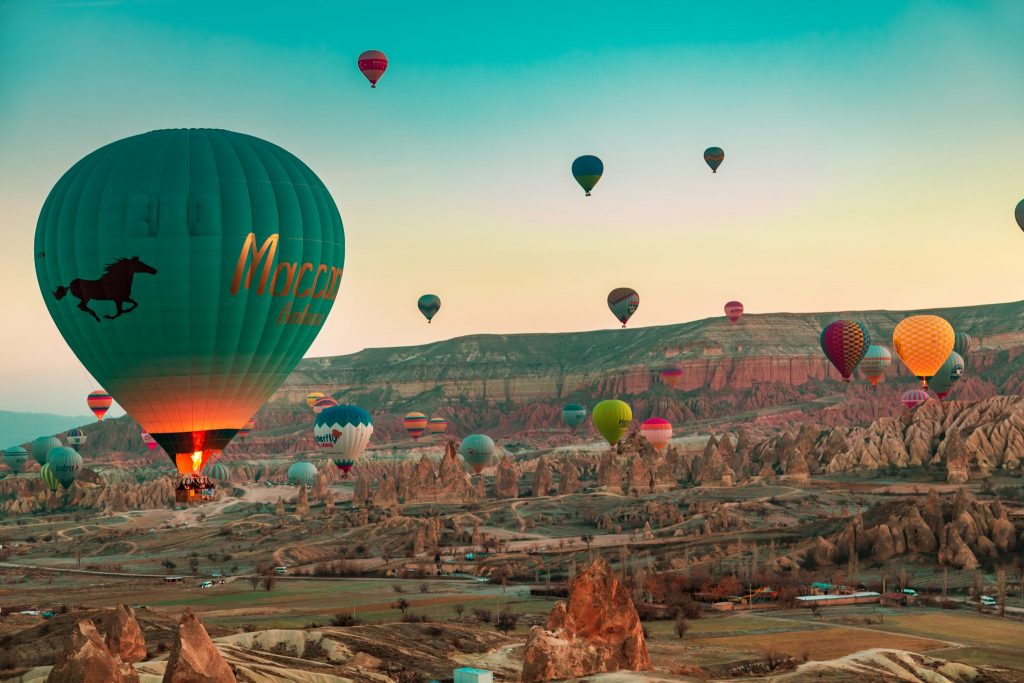 Planning a special proposal, anniversary, or occasion with a group? Hot Air Balloon Cappadocia has private balloon rides available for you to book. While the $3,000 price tag may be substantial, the exclusive experience offered is an unforgettable one. If you enjoy their service, you may wish to book one of their sightseeing tours, including a horse safari, ATV quad trip, a Turkish night snow and dinner, or an Underground city tour.

Hot Air Balloon Cappadocia offers one-hour balloon rides starting at roughly $210 per person, while one-and-a-half hour long balloon rides start at approximately $300 per person. Special discounts are available for booking online in advance. The company includes transportation from your local hotel to the balloon ride departure site, as well as a light breakfast. You’ll finish your ride with a celebratory glass of champagne, more photographs, and a certificate or medal as a souvenir of your accomplished travels.

When it comes to setting themselves apart from the competition, Voyager has many points going for them. They boast the quietest burners available, modern equipment, heat shields, aerobic flooring, and side-wall padding to make your experience the safest and most enjoyable.

Voyager operates with a variety of price points for their flights. The more expensive options offer a roomier experience, more comfortable for passengers to enjoy the scenery for a longer period of time. Standard flights are $180, Comfort flights are $200, Deluxe flights are $280, and Exclusive flights are $550 per person (all prices approximate upon USD exchange rate). The company also offers transport to/from your hotel, buffet breakfast, and post-flight champagne toast with snacks.

A newer vendor when it comes to booking your Cappadocia Hot Air Balloon ride, Butterfly Balloons was formed when longtime hot air balloon pilots decide to go out on their own and run flights their way. They offer the warmth and hospitality that locals pride themselves on delivering in running their business.

Their name evokes the freedom and beauty of a butterfly, which is magnified in their balloon rides that transcend over Cappadocia. Butterfly prides themselves on departing flights under full capacity, with no more than 10, 12, or 16 guests. Butterfly is also now offering wifi on board their balloon flights!

Rides include a light breakfast before flight, firsthand experience of the balloon inflation, a balloon ride of approximately one hour and “sometimes a little more”, culminating in a champagne toast, flight certificate, and camaraderie with the flight team. While exact prices are not found on their website, reviews state they are an affordable option when it comes to area vendors. 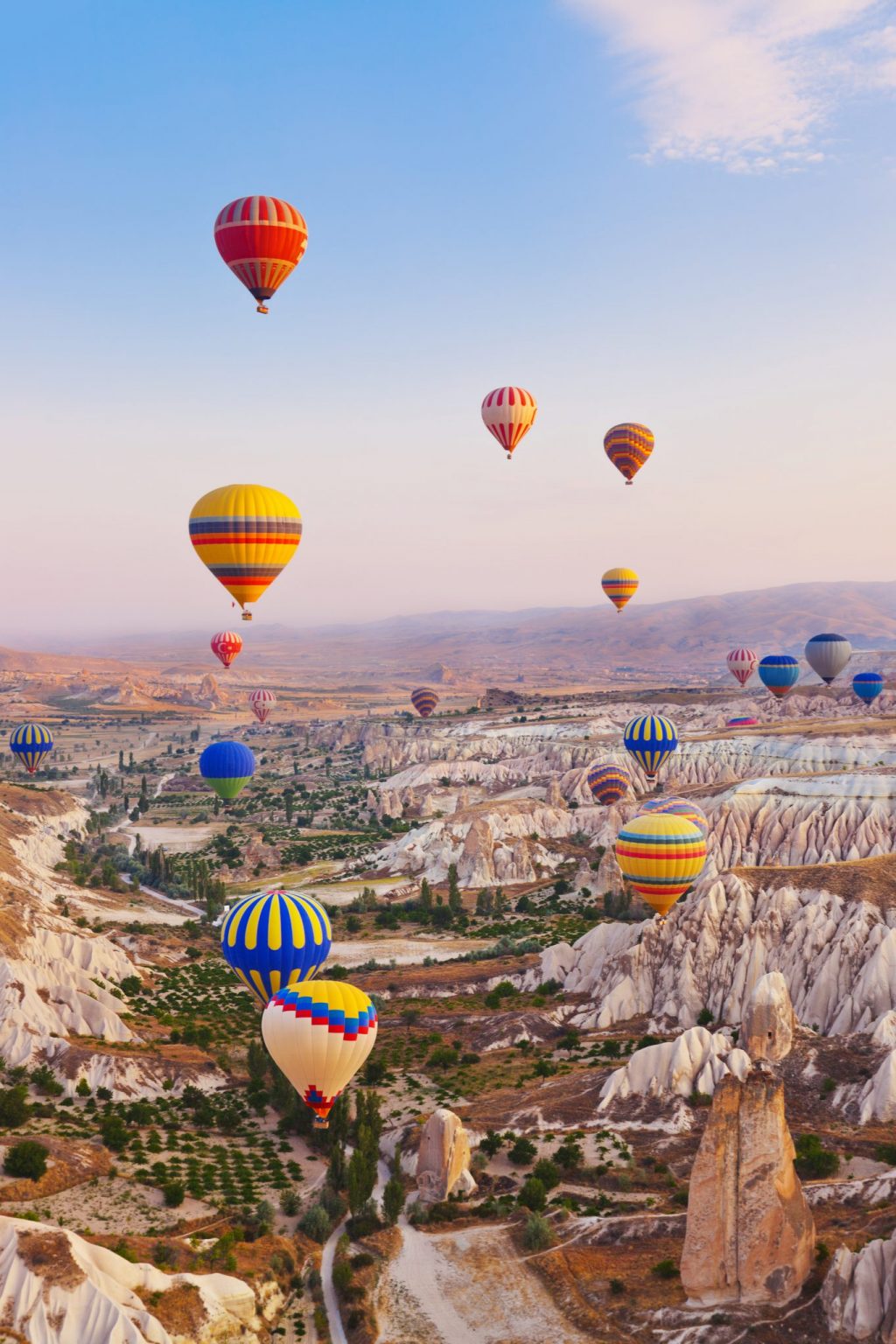 What is it like to fly in a hot air balloon?

Honestly, I have never planned to ever get in a hot air balloon anywhere in the world because I am deathly afraid of heights. However, when I was in Cappadocia, everyone in my group decided they were going to splurge and ride the balloon. I couldn’t NOT do it now that everyone else was doing it. So I went for it.

Surprisingly, it is really peaceful! It felt like we were gracefully floating in the sky over this magical city in harmony with all the other balloons in the sky as the sun came up. It was an unexpected delight. I completely forgot that I was afraid of heights while I was up in the sky. It was truly an unforgettable experience.

Seeing balloons from the ground

If you absolutely do not want to get in the sky for a Cappadocia hot air balloon tour over the city, you can see them just about anywhere they fly over early in the morning. There are excursions for horseback riding. ATVs, you could walk around the city, or even find high vantage points like rooftop hotels. 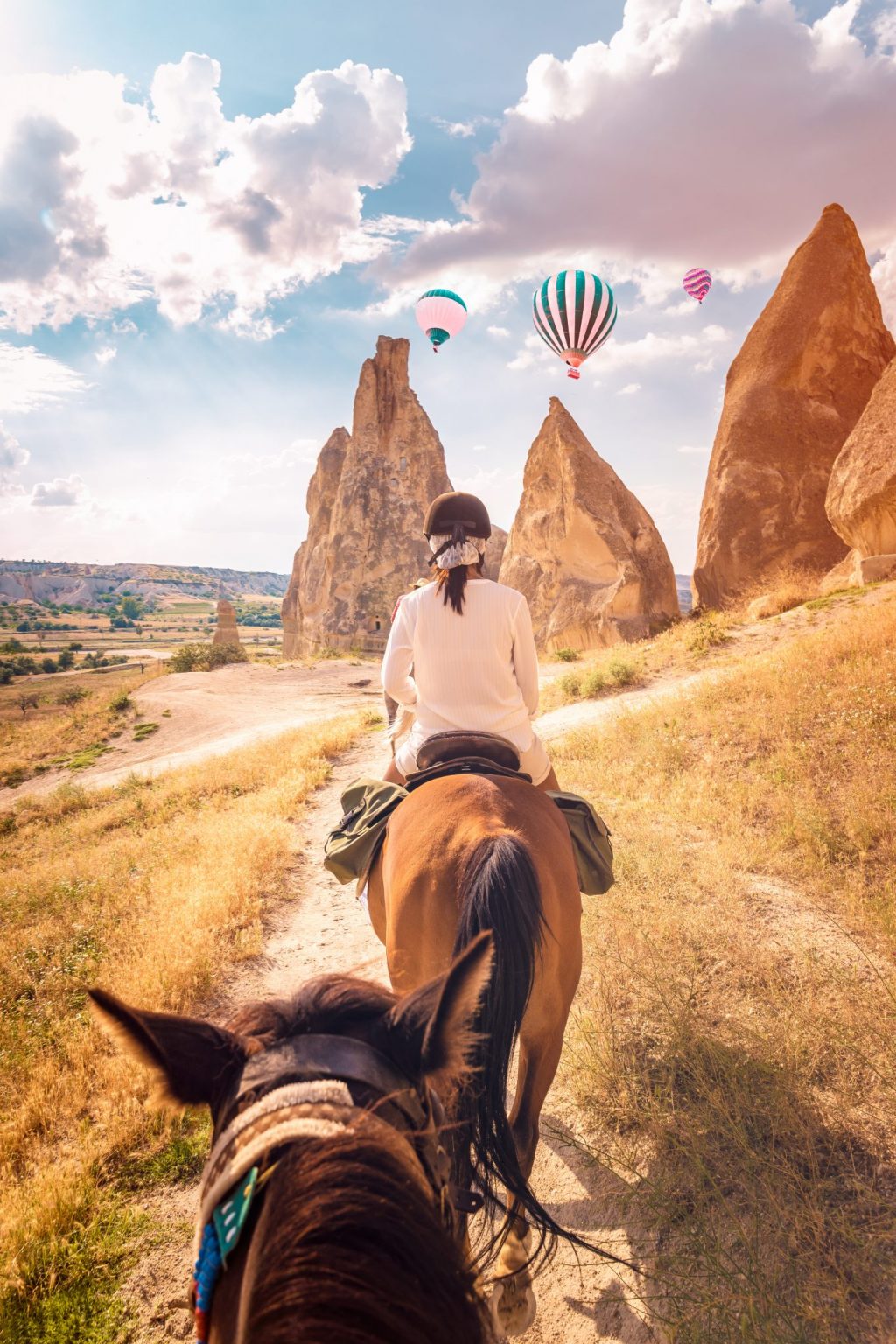 While the Hot Air Balloon ride is without a doubt the premier attraction in Cappadocia, the region of Turkey is rich in history of the Persian Empire. Top tourist cities include Neveshir, Kayseri, Aksaray, and Nigde. There are a number of towns, destinations, underground cities, mansions, and cave houses for tourists to visit and stay at.

One of the most famous sites in central Turkey is the Göreme Open Air Museum, a collection of monasteries constructed side-by-side one another, with rock cut churches and paintings, as well as stunning architecture. The structures belong to the 10th, 11th, and 12th centuries.

The currency used in Turkey is the Turkish Lira, you’ll see this abbreviated as TL. The exchange rate is currently 1 Turkish Lira : $0.19 US Dollar.

There are two airports in the Cappadocia region, Kayseri Erkilet airport (ASR) and Neveshir-Kapadokya airport (NAV). Cappadocia is a region of Turkey easily accessible from Istanbul. On April 5, 2019, Istanbul’s new primary airport in the Arnavutkoy region will open. Planned as the “world’s biggest airport”, it will be expected to handle twice the traffic of Atlanta’s Hartsfield-Jackson, one of the busiest airports in the United States. The newly named “Istanbul Airport” will retain the IST airport code when the Ataturk Airport shuts down. This may result in more flights to Cappadocia for the future, as well as making the region even more accessible.

Erkilet airport is a large, well-connected airport in Cappadocia, with many flights from Istanbul’s Ataturk and Sabiha airports as well as Antalya, and many seasonal flights from Izmir, Munich, Liege, Kiev, and other destinations.

Neveshir is a smaller airport, and closer to the major towns of Cappadocia, so your transport or shuttle will likely be a shorter ride. Turkish Airlines, Anadolujet, and Pegasus Air offer flights from Istanbul direct to Neveshir Airport, while you’ll also find occasional flights from Izmir and Antalya.

There are many private and small group shuttles available for booking in advance, ensuring you have a seamless travel experience from the airport to your hotel. You may also wish to rent your own car to drive in Cappadocia.

Not sure which season you should book your trip? Lucky for you, Cappadocia Hot Air Balloon rides run year round. While summers can be quite sweltering and the winters will bring snow, any season will provide picturesque sights for your next adventure. Weather conditions may impede or cancel a day’s balloon rides, which are carefully monitored by local authorities. Planning to spend a few days in the region will increase the likelihood you’re able to successfully partake in a Cappadocia Hot Air Balloon ride! 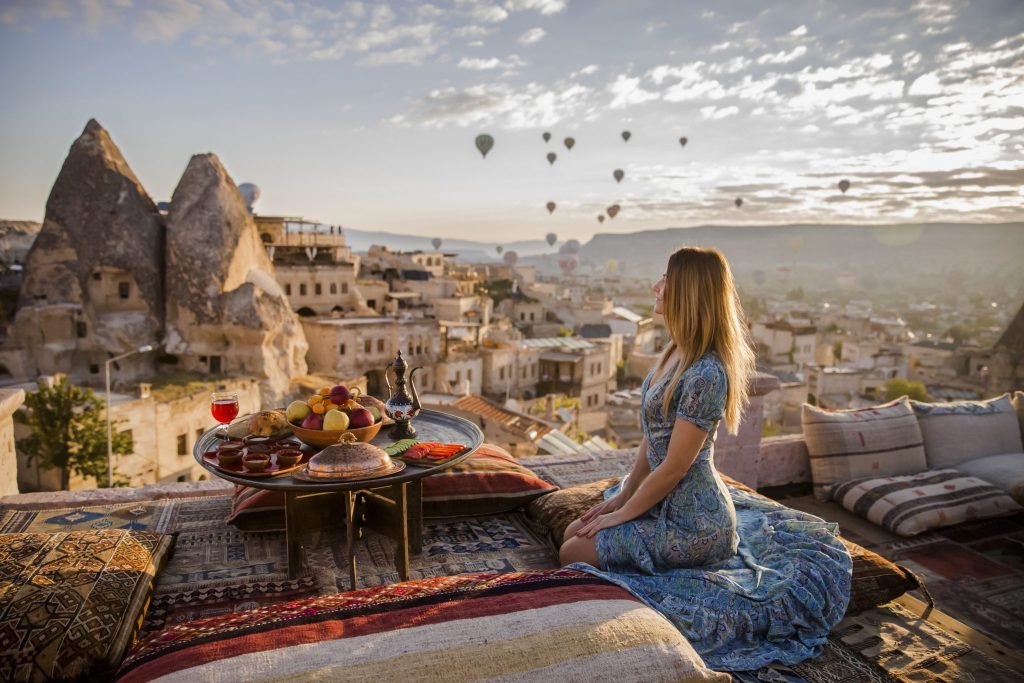 In recent years as Instagram has taken off in the travel industry for travel photos and inspiration, rooftop hotels with views of the balloon lift off over the city have gained popularity. More specifically, people are flocking to Cappadocia to get pictures on the rooftops with the balloons in the background and/or Turkish breakfast photos on the roof with or without balloons. Below are some of the most popular hotels who offer this to their guests.

I recommend booking in advance since the city is extremely popular. You can read more about  Cave Hotels from Christine Tran at Tourdelust. 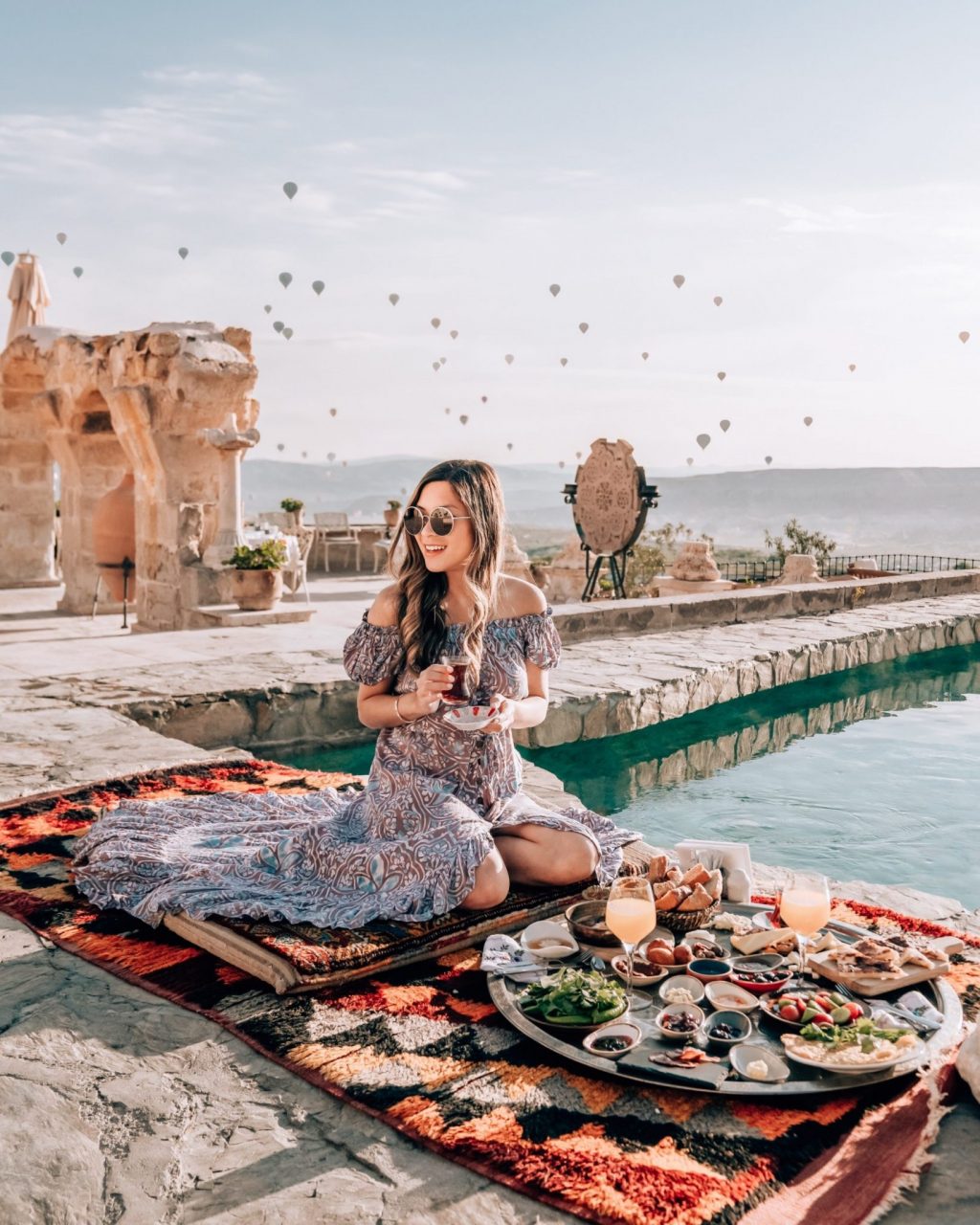 The population of Cappadocia is approximately 5,000 people, so it acts more like a large, familial town than a daunting city. The Cappadocia Hot Air Balloon ride companies will generally know the hotel accommodations and arrange for your early morning transportation. Shops and vendors commonly know one another, and if you have any questions or require directions, feel free to ask! The people of Cappadocia are not only incredibly kind and welcoming, but feel as though the vast tourism brought to them from the incredible Cappadocia Hot Air Balloon rides brings friendly visitors from all walks of life to visit their land.

Other things worth noting: 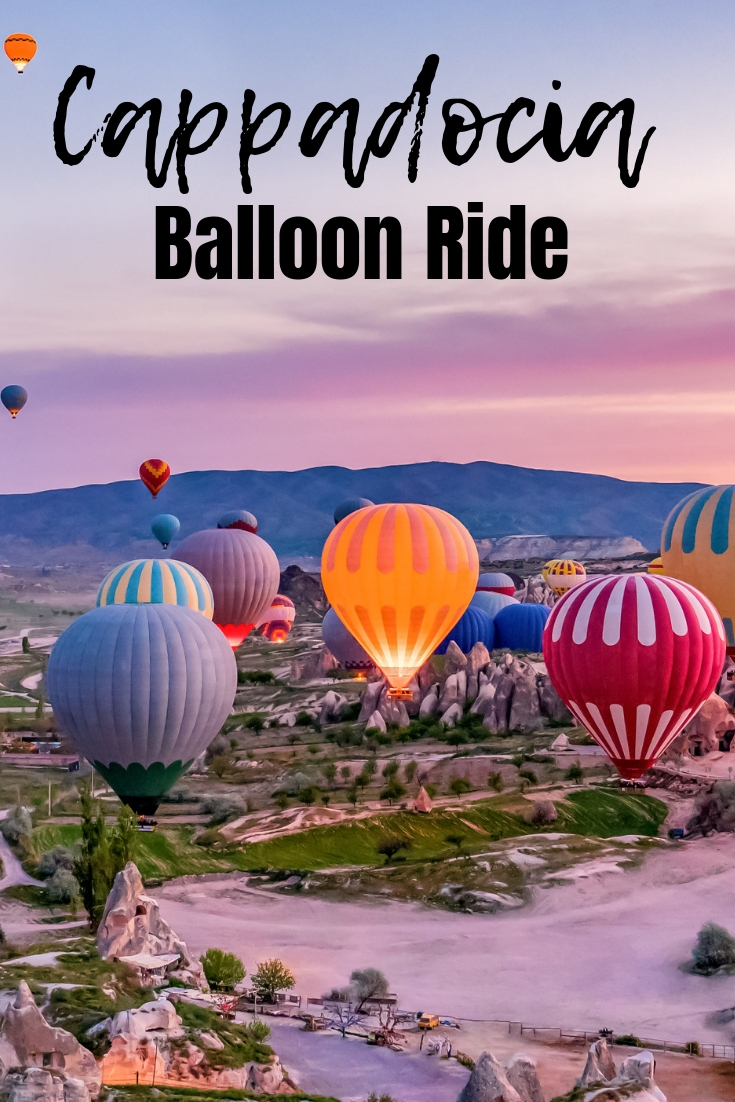 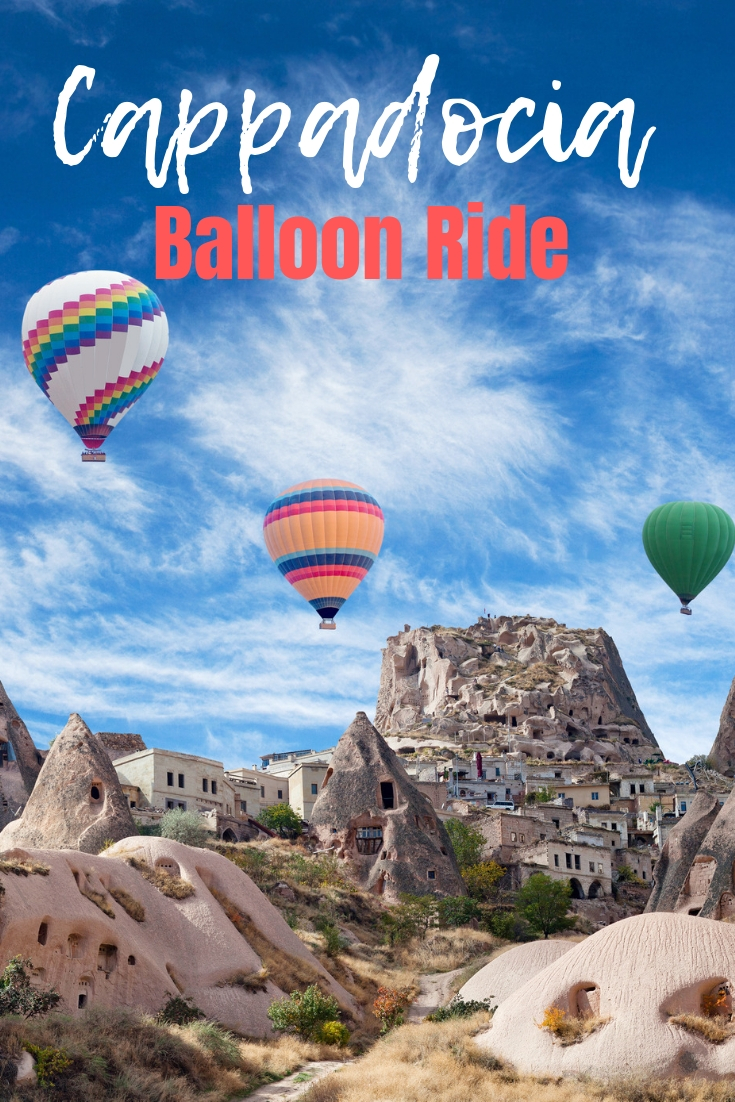 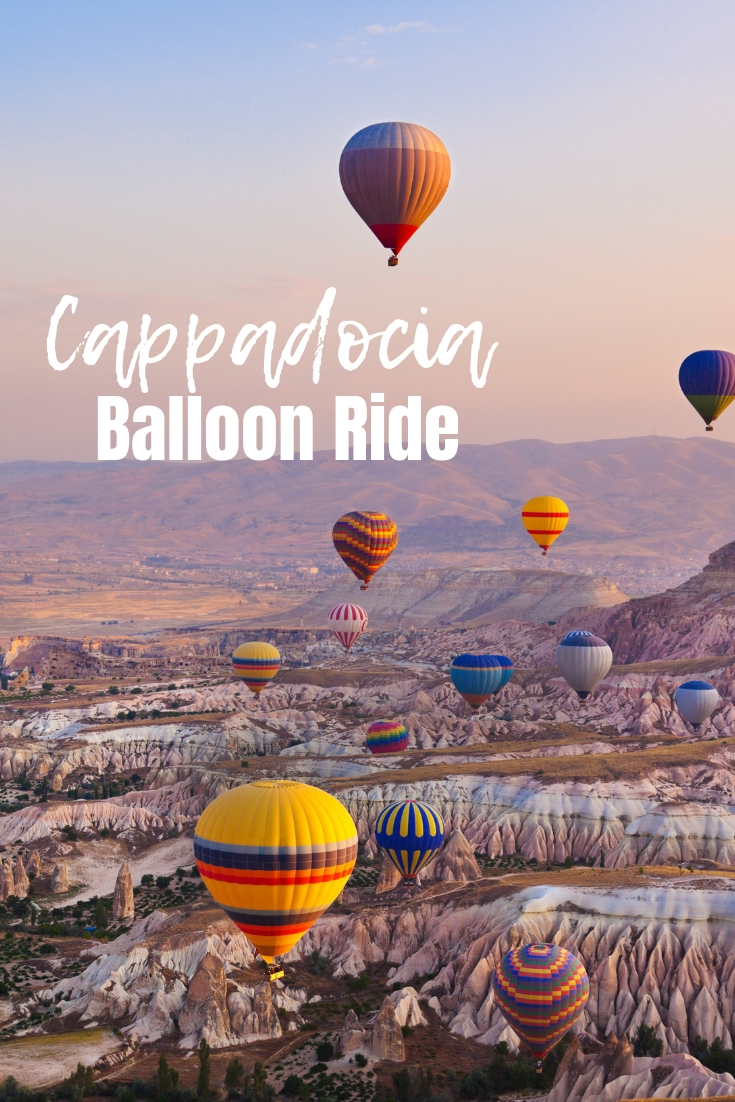