Taking a trip to Asia means you’ll want to consider these Singapore facts before you pack a bag.

With cultural traditions, sights to see, and history of the government, you’ll learn many tidbits of curious knowledge from these fun Singapore facts. Whether you plan one or even a four day itinerary in Singapore, these facts will come in handy and get you knowledgeable about the are.

Singapore is one of only three surviving city-states in the world, with the other two city-states being Monaco and the Vatican City. There is no capital of Singapore! 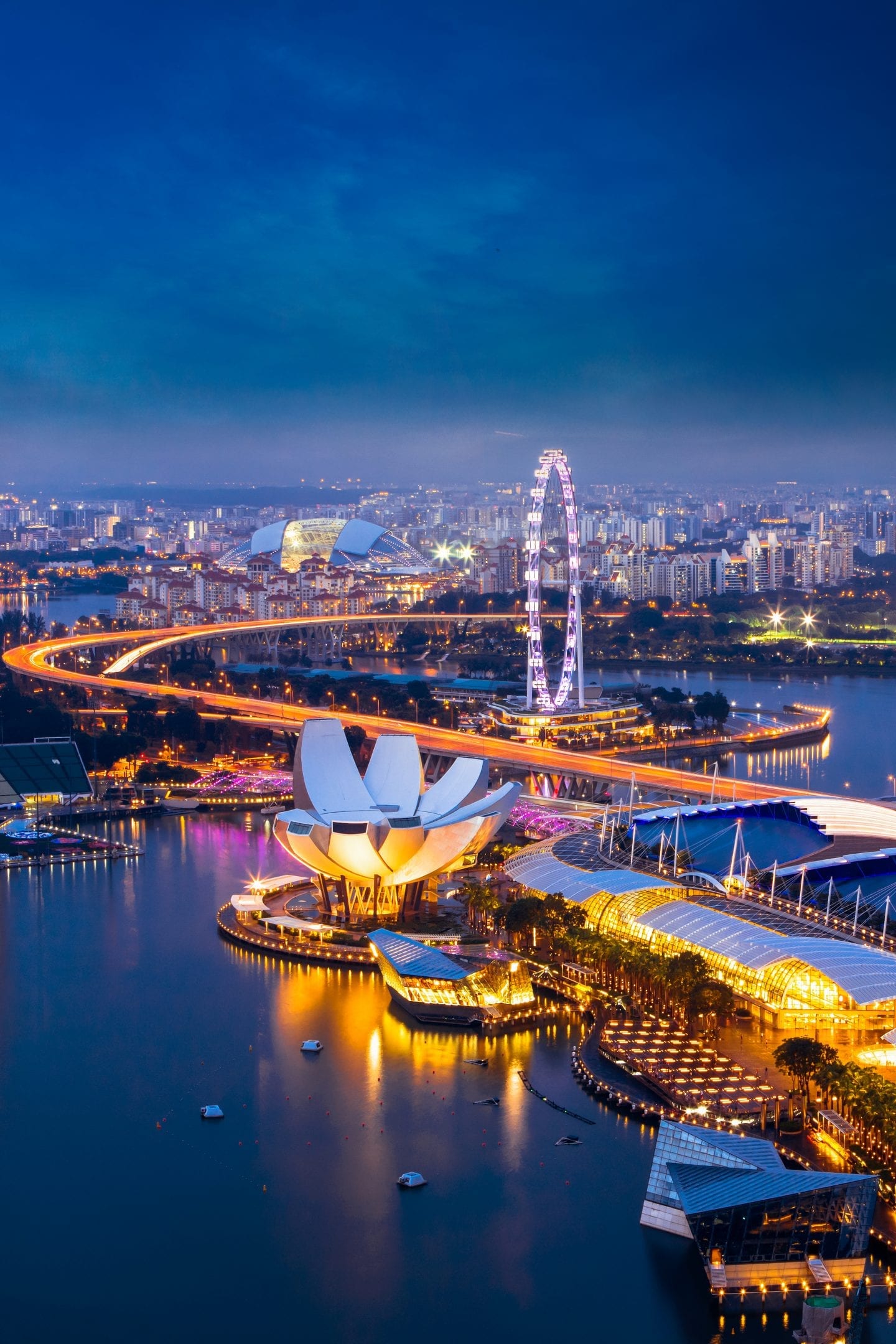 In addition to its main island, among interesting Singapore facts is that the nation of Singapore includes 63 additional islands. Most of these islands remain uninhabited. These include Sentosa (the largest of the 62 offshore islands), Pulau Ubin, St John’s Island and Sisters’ Islands. Check out excursions to see what is beyond the main island of Singapore.

The island was originally named Singapura (which means lion city in Sanskrit) after Sang Nila Utama, a Palembang prince, saw what he thought was a lion. When it comes to genuine Singapore facts, there were actually never any lions in Singapore back in that time. The only lions in Singapore were only brought in for zoos.

Among Singapore facts, sand is paramount. Singapore has been accused of buying too much sand from nearby countries, including Malaysia, Cambodia and Vietnam. It led to several protests and blockades on sand trade after countries found chunks of their land being exported to Singapore.

Marina Bay Sands in Singapore has the highest rooftop infinity pool at 650 feet high, 57 stories above the ground. 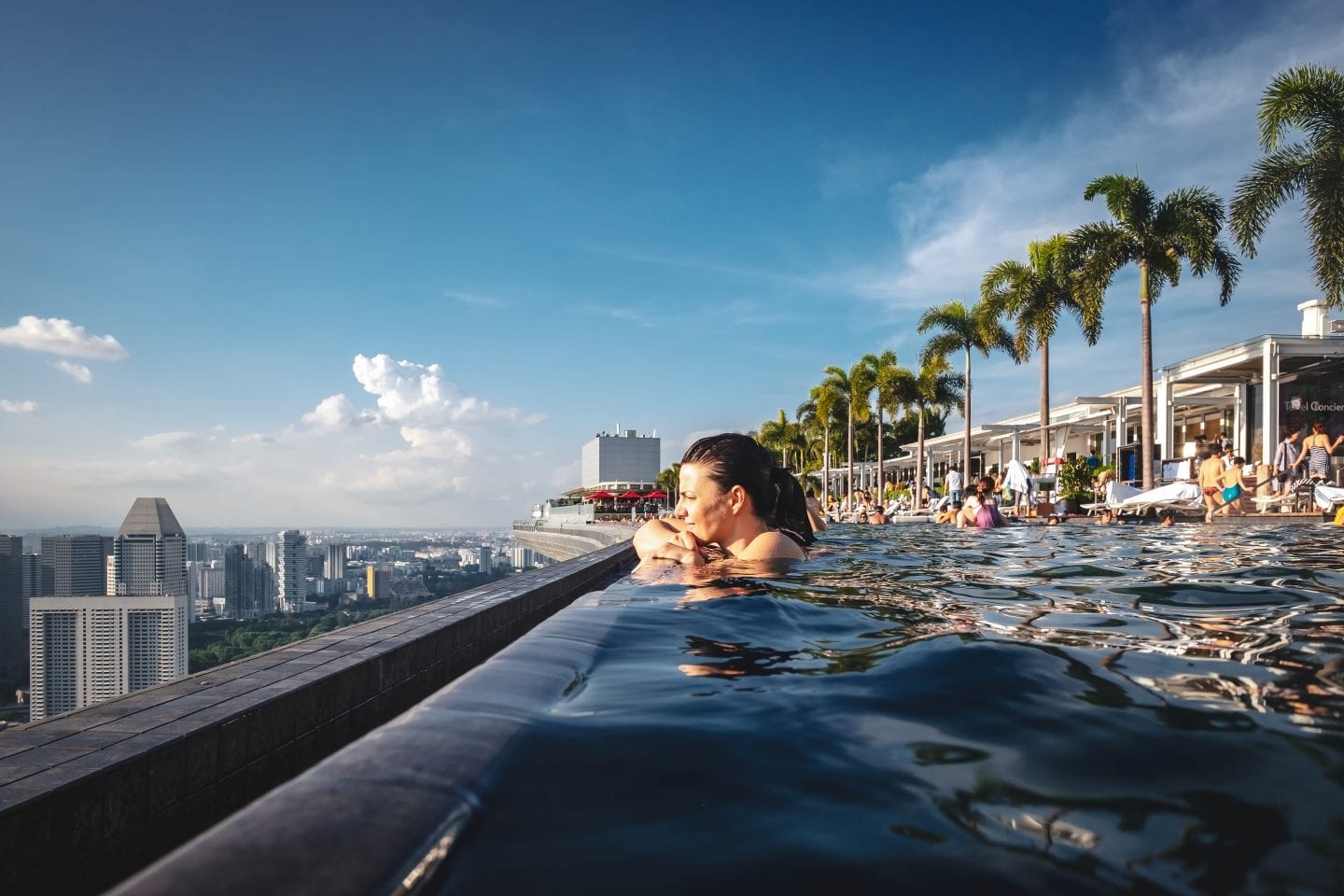 All men in Singapore have a mandatory order to join the local military for 1-2 years once they reach the age of 18.

Special Singapore facts concerning behavior: Singapore actually had a government-backed National Courtesy Campaign, since 1979, where Singaporeans were taught ethics and proper manners. However, in 2001, the name changed to the Singapore Kindness Movement.

For Singapore facts concerning national pride, the Singapore national flag has great meaning. The red on the flag is a symbol of the equality of man and universal brotherhood. The white on the flag represents purity and virtue. There is a crescent moon that signifies a young nation on the rise with the five stars, to the right of the moon, representing the ideals of equality, peace, democracy, progress, and justice.

The National Anthem in Singapore is the tiny text on the backside of their $1000 bill.

Singapore facts concerning the fascination around waterfalls are real. According to the Wildlife Reserves Singapore, the first man-made waterfall was built at Jurong Bird Park in 1971. Dropping from a height of 30 meters, it is said to be the tallest waterfall in an aviary to date. You’ll also find one of the world’s tallest indoor waterfalls (35 meters) in Singapore at the Cloud Forest, Gardens by the Bay. This huge waterfall is the centerpiece of the misty conservatory, designed to protect plant life from the tropical highlands. The world’s tallest indoor waterfall will soon finish construction at the upscale Jewel Changi Airport. This new retail and lifestyle complex will feature the Rain Vortex, a man-made, 40-metre-tall waterfall that will be surrounded by a lush indoor garden, complete with rain falling into the center of the space.

Gardens By The Bay, Singapore’s nature park, gets about 8 million visitors per year. The Eiffel Tower gets around 7 million. 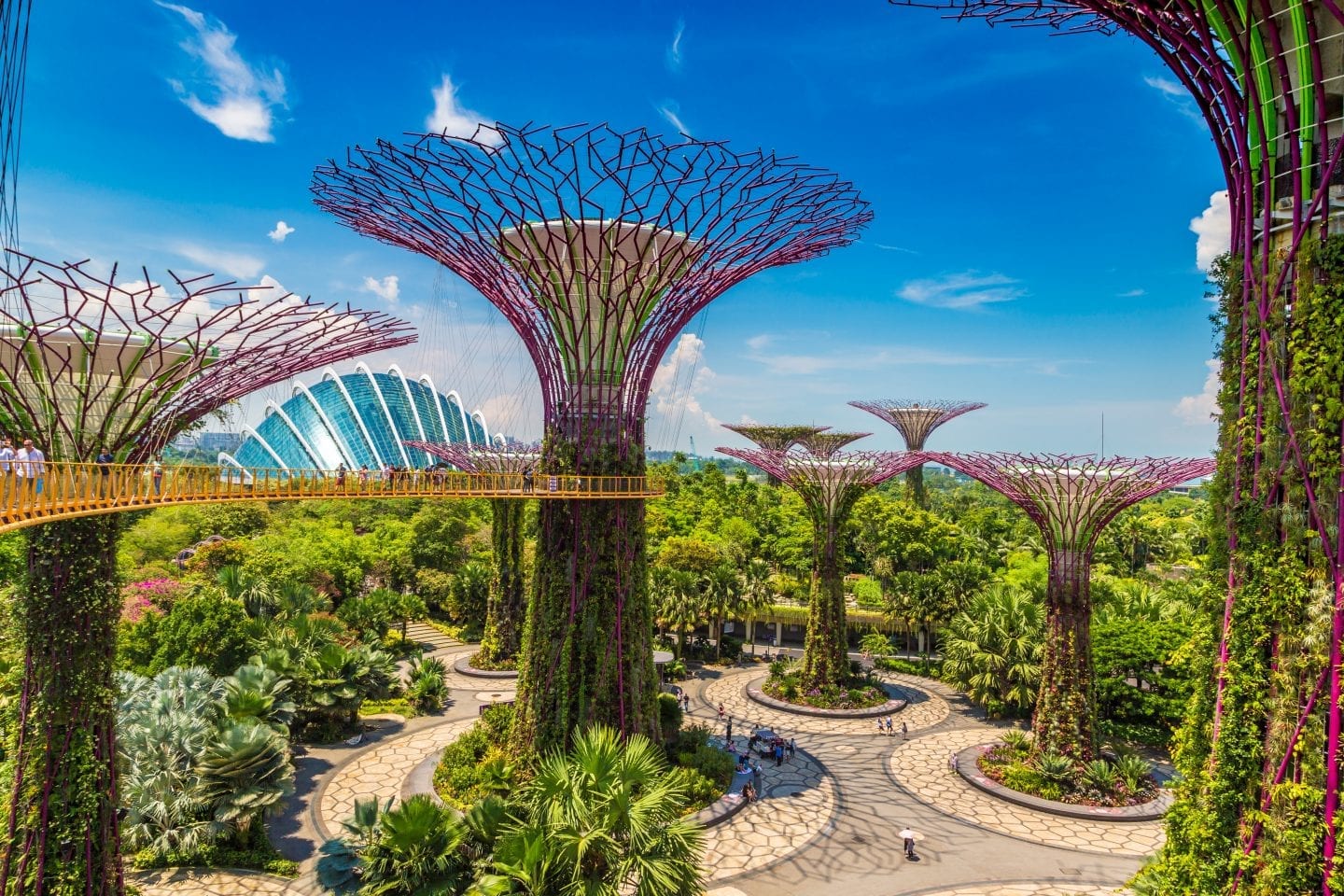 Gardens By The Bay

Inscribed as a UNESCO World Heritage Site in 2015, the Singapore Botanic Gardens has a history of over 150 years since being founded in 1859. Its most popular attraction is the National Orchid Garden, which houses thousands of orchid species known as Very Important Plants (VIPs). Foreign dignitaries and celebrities that have visited the garden have been commemorated by names on over 200 hybrid orchids in this garden, including Nelson Mandela, the Duke and Duchess of Cambridge, Jackie Chan, Zhou Xun, and Bae Yong Jun.

In Singapore, it is not legal to build a building taller than 280 meters. There are no massive skyscrapers allowed.

Visit in July and you’ll find Singapore facts regarding superb food abundant. The Singapore Food Festival, where visitors will savor uniquely Singaporean dishes as well as the best of Mod-Sin (Modern Singaporean) cuisine, enjoy a modern twist to traditional flavors.

Special Singapore facts regarding children are prized. Singapore has two days dedicated to its children: October 1st is celebrated for children below 12 years, and the Youth Day is celebrated on the first Sunday of every July, for teenagers.

The myth that cost of living there is highly expensive is actually a Singapore fact! Singapore is the world’s most expensive city for the fifth straight year in the Economist Intelligence Unit’s latest Worldwide Cost of Living report. Paris and Zurich have tied for second place.

Singapore invented food courts before it was cool. The hawker chefs of Singapore are notoriously famous for producing world-class cuisine. Food hubs have assembled where many dishes are available in one location.

Every day two new restaurants are opened in Singapore. Given the small size, this among starkly incredible Singapore facts to consider.

Friendliness is among many Singapore facts to observe when visiting. Singaporeans refer to strangers such as cab drivers and street vendors as “Aunties” and “Uncles”. This is a very sincere way of addressing older gentlemen and ladies.

The national language of Singapore is Malay. The four official languages of the country are English, Chinese, Tamil, and Malay.

Travel far and wide across the country, as Singapore has more than 3,000 kilometers of roads. Stretched out end to end, they would cover the distance from Singapore to Hong Kong.

There are also Singapore facts outside Asia! In the United States, Singapore is also the name of one of Michigan’s famous ghost towns that perished during a great fire over the Midwest in 1871. Today, the town lives on only in the name of the Singapore Yacht Club, which is located at the end of the town. Interestingly enough, the yacht in Singapore, Asia, is called The Republic of Singapore Yacht Club!

Boasting the largest retractable dome in the world, with a diameter of 312 meters, Singapore’s National Stadium has a huge canopy capable of covering 55,000 spectators from weather.

Singapore has its National Tree Planting Day annually on November 7th. The Prime Minister, diplomats, ordinary citizens, and visitors plant trees on this day. Singaporeans even adopt and name trees for their children as birthday gifts or wedding presents. Forests are no longer abundant in Singapore, and it is among recognized Singapore facts that this ceremonial tradition is important.

Ainan Celeste Cawley, a young Singapore boy, is the record holder for being the youngest child ever to pass O-level Chemistry. He completed the course at just 7 years old! At 9 years old, he received the Physics O-level certificate.

Kindness is celebrated and rewarded with refreshment in Sinagpore, even Coca-Cola will agree. Located at the National University of Singapore, the first ‘Hug Me’ Coca-Cola machine dispenses a bottle of Coke when a person wraps their arms around the machine!

Singapore contains the world’s first night-zoo called the Night Safari. Opened in 1994, the park features over 1,000 different animals. Take the 40-minute tram ride for an overview of the park’s main attractions in the exotic evening setting. Be sure to walk along the four walking trails within the park for a zoo experience like no other.

The Singapore Flyer is among the world’s largest Giant Observation Wheels and one of Asia’s greatest tourist attractions. Opening in 2008, you’ll find panoramic views of not only Marina Bay’s skyline, but also the nearby Malaysia and Indonesia.

The total land area of Singapore is just 682.7 square kilometers, making it one of the 20 smallest countries in the world.

Singapore facts when it comes to traveling are curious: don’t pack Orbit when you visit!  Chewing gum is banned unless you have a medical prescription, and even one-time offenders can incur up to a $1000 fine.

Singapore’s home-ownership rate is actually the highest in the world at 92%! This is accomplished through great support by the Singaporean government, who subsidizes housing for over 80% of the population.

Singapore’s national icon is The Merlion, which is half fish and half lion.

Because it is such a small geographic area, the government seriously discourages people using cars in Singapore to reduce pollution. If you want the privilege of owning a car, the additional fee is approximately 1.5 times the car price to have the vehicle certified by the government.

There is a collection of man made solar-powered trees, reaching up to 50 meters high, in the ‘Gardens at the Bay’ project opened by the Singaporean government. The venue is now a cultural symbol and new tourist hot spot in Singapore. 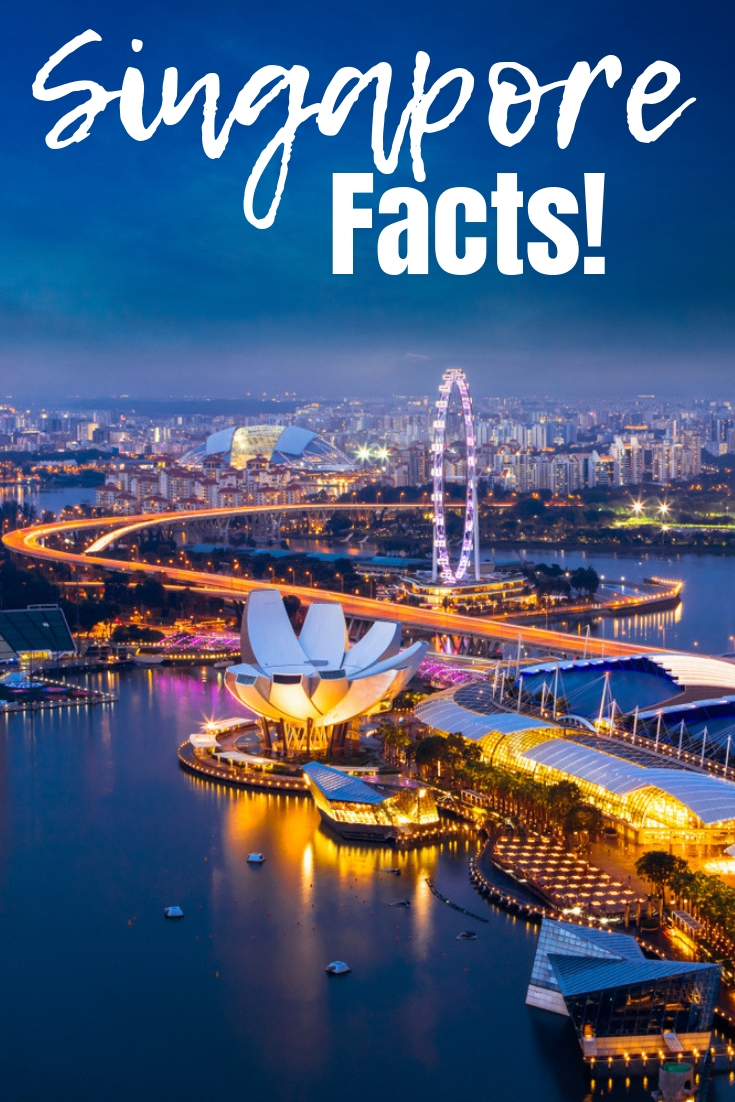