I’ve traveled to Iceland before and believe me when I tell you it is a destination like no other and these Iceland facts are going to blow you away! Just a short flight from the US and Europe, the scenery in The Land of Fire and Ice is breathtaking and the people are genuine. This post features several unique Iceland facts that set the region apart from not only other Scandinavian countries, but also anywhere else on your list of top travel destinations. 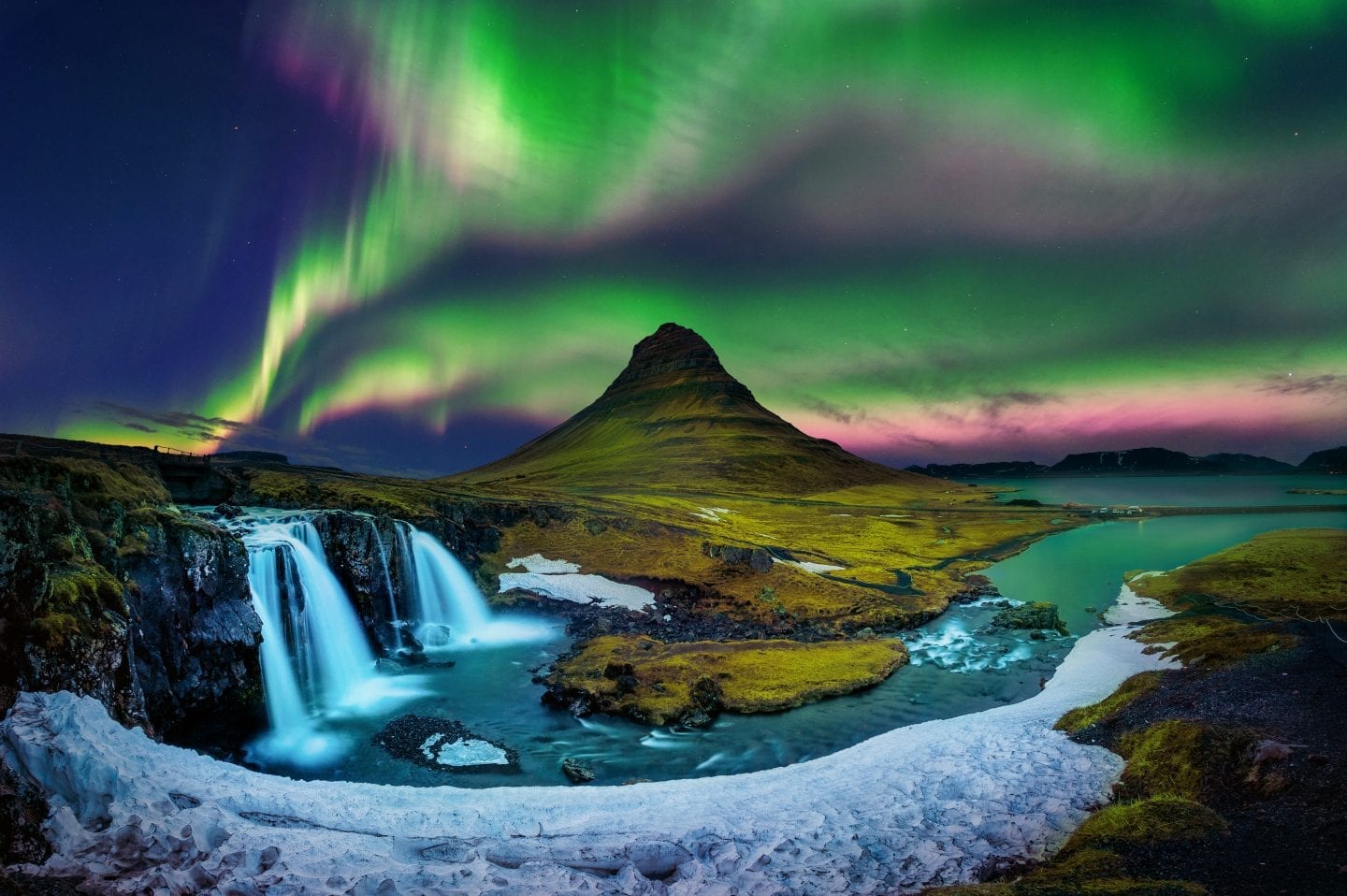 With a close proximity to the Arctic Circle, many think Iceland is a constantly frigid destination, but that could not be further from the truth. The weather is constantly changing in Iceland, and the expression “if you don’t like the weather, wait 5 minutes!” is a common one in Reykjavik. The climate in Iceland is so variable because the Gulf Stream flows up from the Caribbean, bringing warmth to surpass the cold chill. Summers average a temperate 54 degrees Fahrenheit, while winters average 35 degrees Fahrenheit. Hows that for Iceland facts? It isn’t always cold!

Iceland sits on top of one of the earth’s hot spots, with frequent geothermal activity throughout the country. You may see infrequent earthquakes, geysers, hot springs, volcanoes, mud pools, and much more. While earthquakes and volcanoes may signal danger for some, they are quite the remarkable attraction of natural beauty in Iceland and have not caused notable damage in centuries.

There is no Uber or Lyft in Iceland.

Another one of Iceland’s facts not to miss: some of the world’s greatest wildlife. You can take guided tours for whale watching, puffin watching, and much more. In fact, Húsavík, a small fishing town in North Iceland, is the whale watching capitol of Europe.

Christmas is a special holiday in Iceland. They celebrate with 13 Santa Clauses, the cities are lit up with Christmas lights, the holiday lasts for 26 days, and best of all? You’re almost guaranteed a white Christmas! The charm continues with Christmas markets, ice skating rinks, holiday concerts, and bountiful Christmas buffets.

Reykjavik is the largest city (and capital) of Iceland. 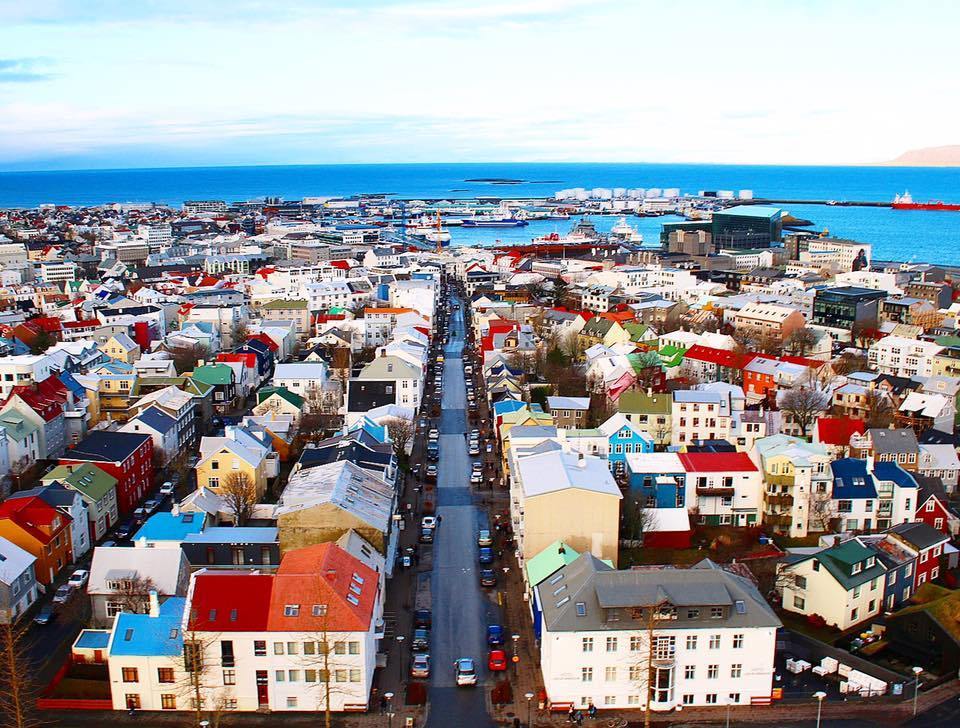 Crime is incredibly low in Iceland (if this isn’t the best of the Iceland facts, I don’t know what is). Unique Iceland fact: their police officers don’t even carry guns! Violent crime is practically nonexistent, and Iceland has no active army. The Coast Guard oversees an Iceland Air Defense System to maintain coastal waters.

Another unique Iceland facts is that it is the oldest democracy in the world. An independent commonwealth, Iceland has been governed by the Althingi parliament since 930. Iceland became the Republic of Iceland in 1944.

One of the amusing Iceland facts: for a country that loves beer, it actually was illegal until 1989!

Why the fascination with Vikings? Another of the fun Iceland facts: Vikings from Norway first settled the country sometime in the 1800s. They went on to found Greenland shortly thereafter. They purposefully misnamed both countries so their enemies would go to ice-covered Greenland, rather than endangering them by following the Vikings to where they resided in Iceland.

Glaciers shape the remarkable landscape in Iceland, dominating all that was not first created by magma and earthquakes. This natural shape has resulted in Iceland as a truly unique destination. 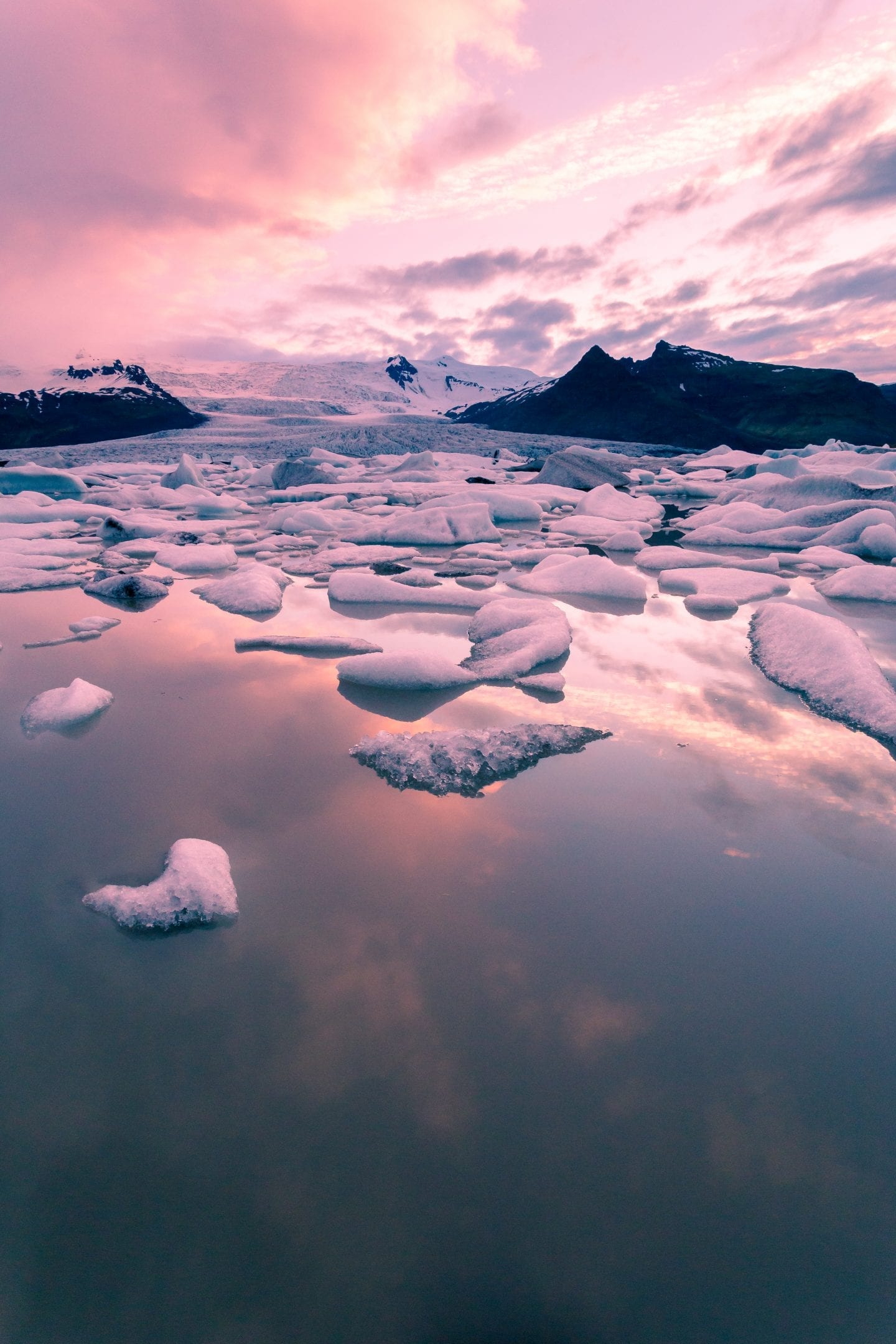 Icelandic is a complex language, and while similar to Danish and Norwegian, it is very distinctive from the rest. That being said, one of Iceland’s facts remains that English is widely spoken across the country. English and Danish are also required languages to learn in many Iceland schools.

Iceland consumes more Coca-Cola than any other country per capita. Somewhat of a contrast, there are no McDonalds restaurants in Iceland! With fast food limited, Iceland has a bevy of culinary offerings, with many interesting traditional choices. Sheep’s head, pickled ram’s testicles, dried fish, fermented shark, and many other odd choices are found in Iceland that you wouldn’t find anywhere else. That being said, the most popular food in Iceland is hot dogs. Lamb is the most popular meat consumed.

Among many Iceland facts, you’ll be surprised to learn that famine once ravaged across Europe in the end of the 18th century, and nearly 25% of the population of Iceland emigrated to the United States and Canada. The famine was caused by a volcanic eruption and killed nearly 25% of the population. There was also a fatal smallpox epidemic in the 18th century.

Iceland has nearly 40 active volcanoes today. Hundreds more volcanoes exist, but no eruptions have been detected in thousands of years. Again, the eruptions caused have not sustained significant damage in many centuries; they are more an attraction than danger!

Þingvellir National Park is one of TWO places in the entire world where you can see two tectonic plates meeting above ground. This is a popular place for snorkeling and diving between the two.

The United Nations Human Development Index ranked Iceland as the 6th most developed country in the world in 2018. Iceland’s ranking has been continually increasing in recent years.

Iceland is home to two affordable airlines: WOW Airlines and Iceland Air. Travel from the east coast of the US is roughly five hours, while flights from the United Kingdom is only about three hours.

Another Iceland fact is their notable conservation and renewable energy sources. Hydroelectic power and geothermal water provide for the majority of Iceland’s electricity and heating.

There are many sports and popular recreation activities in Iceland. Handball is a very traditional sport, in fact the national sport of Iceland, while football (soccer), basketball, swimming, and horseback riding are popular. There is also a type of popular wrestling called Glíma, which may have originated in medieval times.

Iceland uses the króna as their official currency. Other than the Seychelles, Iceland is the second smallest country to develop and use their own currency and monetary system. Electronic payments are very prevalent in Iceland, so ensure your credit or debit cards do not have heavy foreign transaction fees for your trip. Iceland has contemplated adapting the Euro, but no official plans are currently in development.

Iceland’s economy is lead by the fishing industry with significant exports, as well as manufacturing unwrought aluminum. Iceland fact: their fishing industry was bolstered by The Cod Wars of 1958 with Great Britain, where Iceland was awarded significantly more territory for fishing!

Many visit Iceland for its weather that contributes to exceptional conditions for outdoor recreation. Activities include rock and ice climbing, skiing, snowboarding, cycling, hiking, fishing, and ski touring.

The Blue Lagoon Spa is a popular destination for visitors of Iceland. Here’s another Iceland fact: the beautiful, relaxing water stays warm through a geothermal plant. You can apply white silica mud to your skin there and leave relaxed, revitalized, and clean. 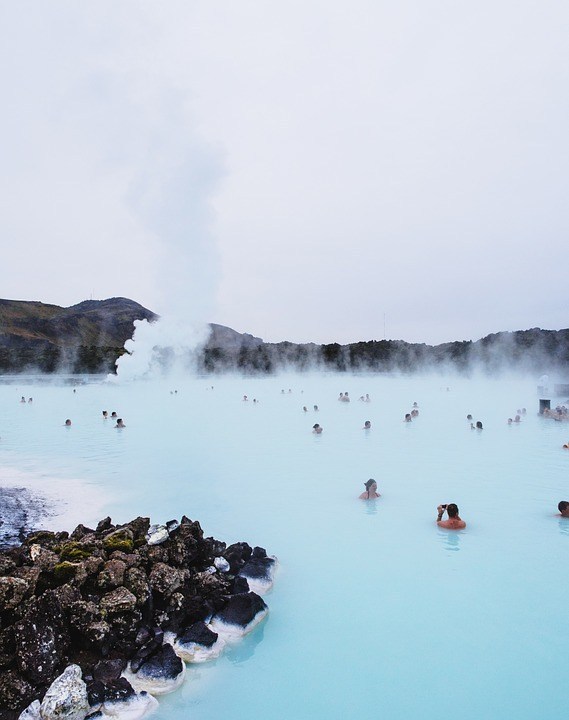 A destination in Iceland off the beaten path, you can tour glaciers and peaks, waterfalls, and rivers at Skaftafell, in Vatnajökull National Park, a beautiful wilderness area.

Gulfoss, or The Golden Circle, remains Iceland’s most famous waterfall. Featuring rolling water cascading onto a rocky ravine, it is a sight to see. You might even be lucky enough to catch a magical rainbow on your visit! It remains one of the most popular tourist attractions in Iceland.

Mythical creatures have a robust reputation in Iceland. It is not uncommon for adults to believe in elves, trolls, and other characters. Roads are even constructed to avoid areas where elves or trolls are rumored to inhabit.

Iceland’s flag is made up of red, white, and blue, with very deliberate meaning. The red stands for the island’s volcanic fire. White represents the snow (although it does not snow as heavily as one might think in Iceland). The blue represents the ocean that surrounds the island.

Tourists often visit Iceland to witness the Northern Lights, but because they occur naturally, it is not truly possible to visit Iceland and plan your trip around seeing the Northern Lights. With a 5-7 day stay, it is almost certain you will have an opportunity to witness the natural beauty of the solar particles at least once. They are visible from early September through the end of April.

Many countries have their own significant holidays, and Iceland is no exception, but here’s one of the interesting Iceland facts: Bondadagur is celebrated as Husbands’ Day each January, where wives are instructed to give gifts to their husbands and serve them traditional food.

Iceland is the 18th largest island in the world.

The Global Peace Index and the Guinness Book of World Records have both ranked Iceland as among the most peaceful nations in the world. 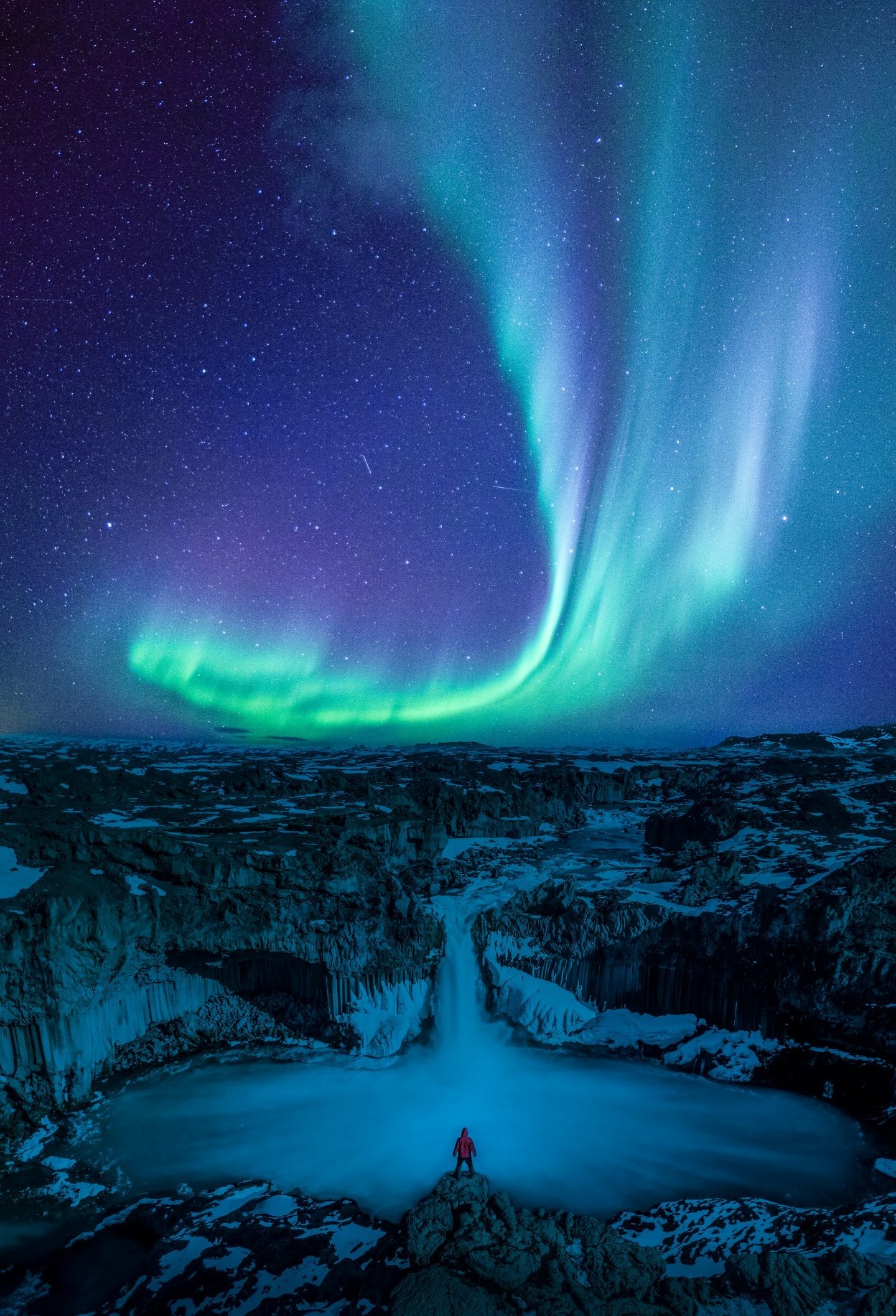 There is so much to see and do in Iceland, The Land of the Midnight Sun. Iceland has been on the rise for the past several years as a top tourist destination among many world travelers. With its temperate climate, beautiful natural features, wide variety of specialty foods, and much more, there are more than enough reasons to visit. Hopefully this article on unique Iceland facts inspired you to see beyond the Northern Lights and explore Iceland’s wildlife, glaciers, sports, activities, and people. 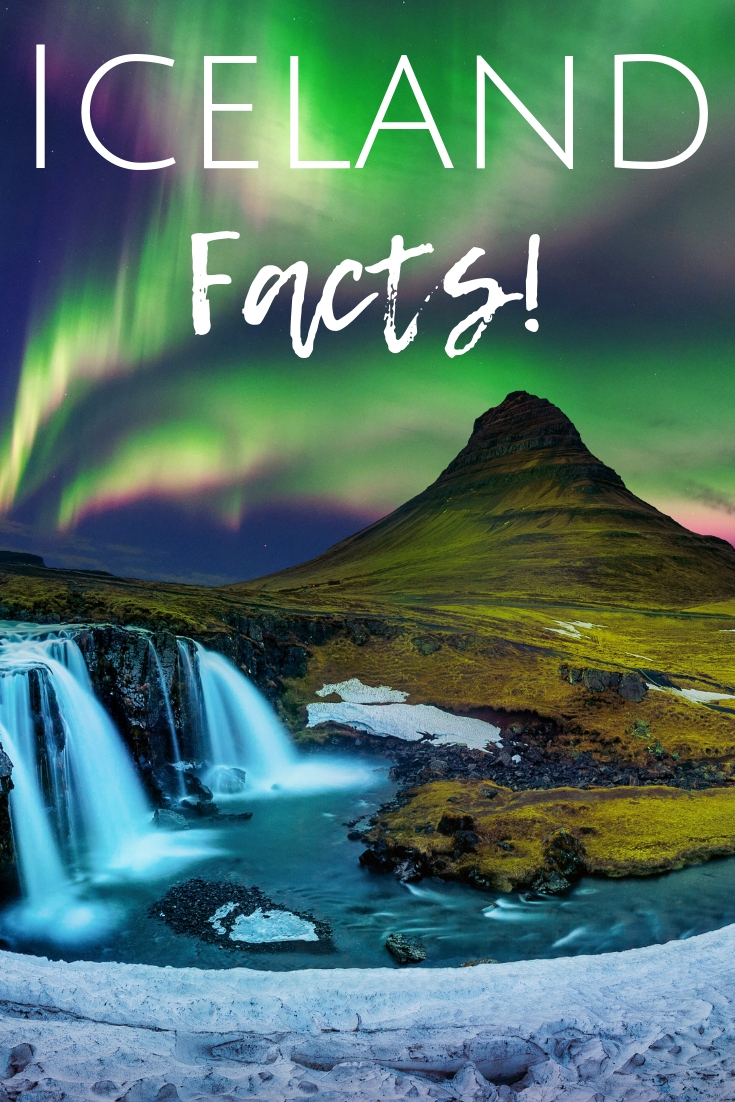